The last man living on a deserted Aylesbury Estate block is in the middle of a real life grim fairy tale. 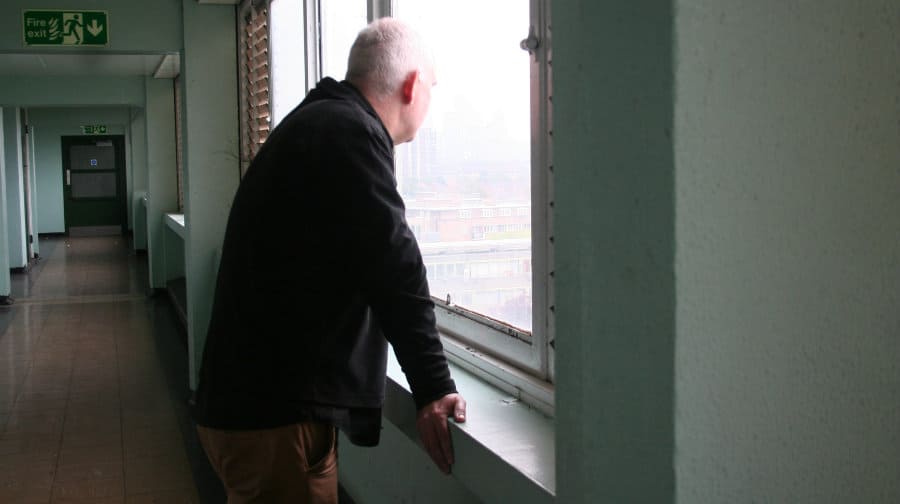 Les looking out of the window of his Aylesbury block.

The last man living on a deserted Aylesbury Estate block is in the middle of a real life grim fairy tale, after he came home one day to find total strangers had really made themselves at his flat.

They’d had a bath and dried themselves on his towel, before hanging it up to dry along with their wet washing. They’d put their toothbrush next to his and left their phone charger in the wall.

Mr Kerrigan was very understanding about this modern-day Goldilocks breaking into his home and putting their feet up, but he did admit to finding the pitch black corridors and eerie sounds of voices echoing round the otherwise empty block “quite daunting.”

Mr Kerrigan is one of a remaining handful of leaseholders who are staying in their homes (and their investments) to fight for the best deal they can get from Southwark Council, who want to knock down the estate and build a mixed community in its place.

The arguments for and against wholesale ‘regeneration’ of this nature tend to be very partisan, with one side screaming ‘social cleansing’ and the other flying the flag of ‘progress’ and improved living conditions. What gets lost are the real people in the middle of it all, having their lives turned upside down because of their postcode.

Many of the leaseholders left on the Aylesbury have lived there for over twenty years, have family, friends and jobs nearby and would lose more than four walls if they couldn’t afford to stay in the borough. Some of them have also paid off their mortgages but survive on low incomes, so losing their home is also losing their financial security.

Southwark Council may well believe it is doing the best thing for the borough and its residents by tearing down the Walworth estate and certainly doesn’t have a proactive social cleansing agenda, but while it’s driving the steamroller of ‘progress’, doesn’t it also have a duty of care to all of its residents at the same time?

Would any of us want to live in a derelict block with no lighting or heating, with people sleeping and defecating in the corridors and squatters breaking in to take a bath?

How would any of us react to losing our home, our security, and being put in a position where we could be forced to live miles away from the lives we have built up over years?

When the North Peckham estate was knocked down we saw leaseholders living on a building site, with their walls shaking as their neighbours’ properties were torn down around them.

When the Heygate was demolished we reported tales of the heating and hot water going off while elderly residents tried to hold out in their first family homes.

A former Tory councillor in Southwark, Toby Eckersley, has thrown his lot in with the leaseholders because once he fought all the way to the Court of Appeal to save his home and he says: “I understand the pain and suffering involved.”

The amount of money involved in regeneration schemes like the Aylesbury, the Heygate and the North Peckham Estate is enough to make your eyes water, so can’t more be set aside from the outset to help those Southwark citizens who are going to be the living fallout of the borough’s regeneration?