'People through no fault of their own can fall victim to unscrupulous landlords for whom money is the bottom line, no matter who has to suffer in the process' 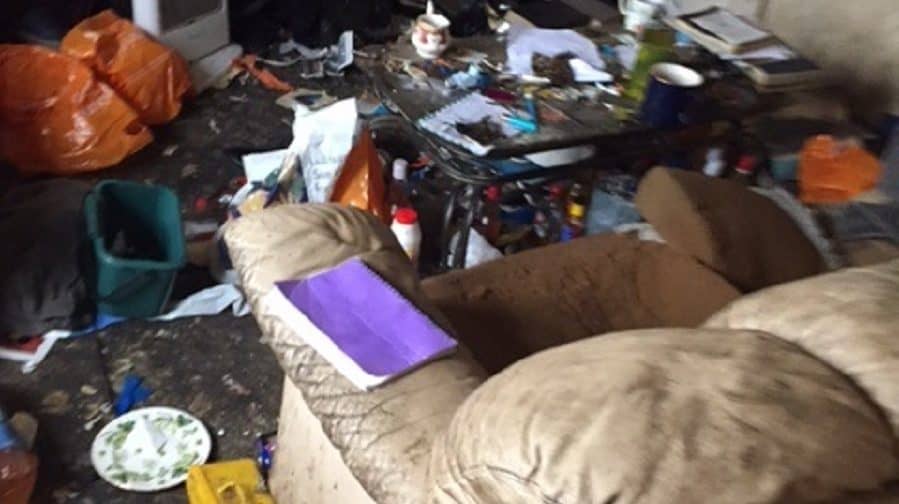 A living room the team have encountered

After just two weeks on the job as an intern at the Safer Renting Project in Camberwell, my eyes have already been opened to the murky underworld of what has been dubbed, the ‘shadow private rented sector’, writes Sarah Collins,  safer renting intern at Camberwell’s Cambridge House…

This is where rogue landlords operate; cramming whole families into single rooms, throwing tenants onto the street and using smoke and mirrors to evade attempts to track them down.

When shadowing a council officer, I met a landlord who tried to pass his licensing requirements by putting some AstroTurf on the living room floor and calling it a ‘Garden Room’. The specific dynamic of the tenant-landlord relationship creates a real power imbalance. There are, however, a host of laws that rectify this imbalance, such as the Protection From Eviction Act 1977 and The Housing Acts 2004 and 2016, that create the opportunity for a tenant to have their rent repaid to them where a landlord has committed an offence.

The problem is that tenants are often not aware of these rights, have no opportunity to access them, or are just too intimidated to enforce them, meaning that rogue landlords routinely get away with shocking practice.

The longstanding precedent of Street v Mountford establishes that you can be a tenant with rights, even if you have no written agreement, or an agreement that says otherwise.

Many find their electricity and gas supply cut off, their landlord refusing to provide a tenancy agreement, and perplexing chain of dubious agents responsible for their residence, leaving the tenant never quite sure with whom they are dealing. When council licensing and enforcement teams go out to prosecute landlords and bring them to task, the landlords often react by evicting their tenants, creating a catch 22 for local authorities who left with more people needing costly temporary housing or homelessness assistance.

The consequences of criminal behaviour by landlords on tenants is grave, with the ending of a private tenancy now the biggest single cause of homelessness, accounting for 27 per cent of all households accepted as homeless in the last year.

My clients are often hard working people with families who are made to feel unsafe in their own homes by landlords pursuing them with unenforceable legal threats.

In these first weeks I have met a frightened family, all living in one room, and been asked by one tenant to estimate how long it would be before bailiffs would come to evict him.

People through no fault of their own can fall victim to unscrupulous landlords for whom money is the bottom line, no matter who has to suffer in the process.

In my new role, I’ve already made a host of mistakes, including calling the landlord’s number instead of the tenant’s before launching into an introduction of our service to tackle rogue landlords.

Memorably, in my third week, I realised halfway through a meeting at Westminster City Council that my shirt had been inside out for the whole morning.

However, working with the team at Safer Renting, is giving me hope that rogue landlords are not going to get away with it forever.

The Safer Renting Project is a new start-up tackling the exploitation of London’s private rented sector by ‘rogue’ or criminal landlords.

Operating as part of the long-established social action centre, Cambridge House and Talbot, Safer Renting is the only service of its kind.

It provides access to justice for tenants of criminal landlords, advocating for them in partnership with five London boroughs, and spearheaded by Roz Spencer and Ben Reeve-Lewis, of Channel 5’s Slum Landlords and Nightmare Tenants fame.

To find out more visit www.ch1889.org