The council are wrong about ‘Pooman House’ – and I can prove it!

AJ Hilditch was "shocked and surprised" about Council's response to his 'dirty protest.' 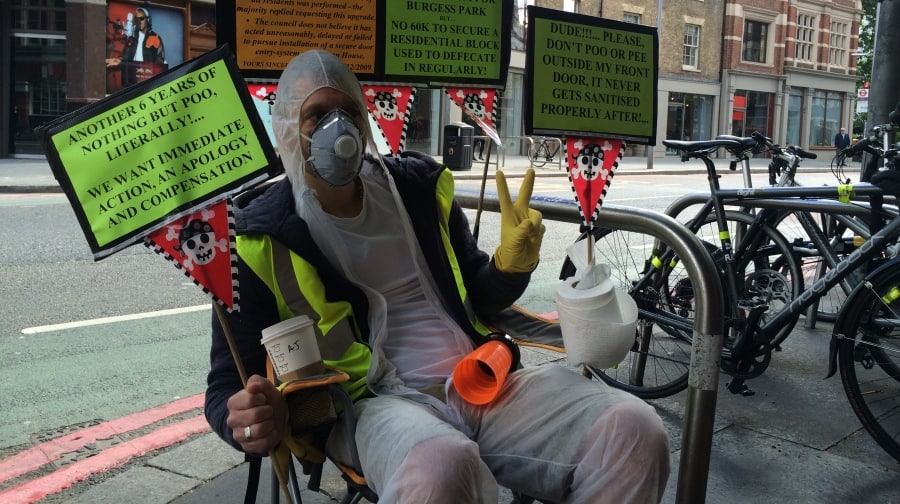 On Monday June 1st, 2015, I started my weekly, one-man sit down protest at The London Borough of Southwark offices, Tooley Street, over the Council’s failure to stop our residential block’s communal spaces from being used as a toilet on a regular basis, and the council’s inability to sanitise the area properly afterwards.

My mini-protest and the ongoing battle to get the problems sorted was picked up and subsequently published by the News, (June 4th, 2015 – Dirty Protest)

I was shocked and surprised to read the Council’s response to the News that Newman House residents had returned a ballot with the majority against the installation of a secure door entry system.

I have in my possession a genuine and legitimate copy of a letter fromcthe Council addressed to the Local Government Ombudsman (LGO) in relation to this exact matter, date 16 December 2009, which clearly states the following.

“In Aug ’09, after the involvement of a local councillor a ballot of residents was performed to assess the need for a new door entry system. A majority replied requesting this upgrade. The council are currently still in the process of seeking quotations for the installation of a new system from three contractors. Once a company has been chosen and funding secured – residents will be consulted about the final design.”

“The Council: Does not believe it has acted unreasonably, delayed or failed pursue installation of a secure door entry system to Newman House.”

Southwark NewsCommentThe council are wrong about ‘Pooman House’ – and I can prove it!