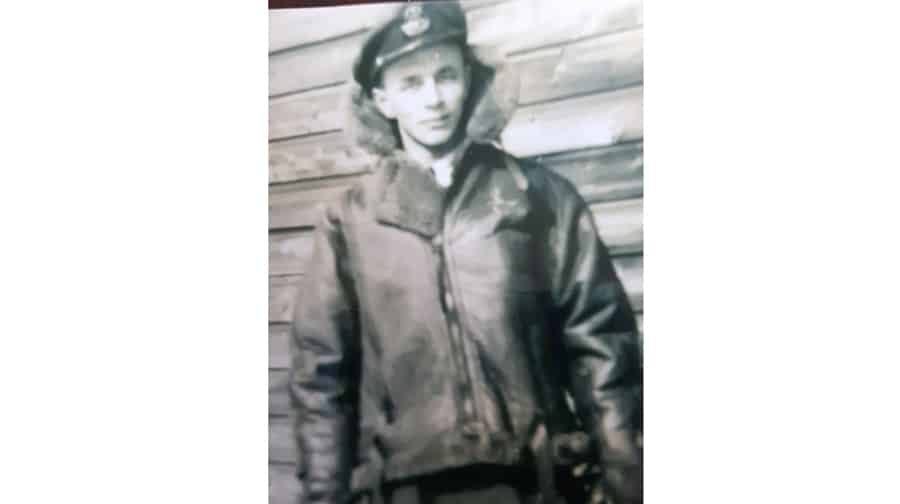 How does a Peckham-born printer in his 90s end up the subject of a book? asks Kirsty Purnell…

Possible premises are multiple but in the case of 94-year-old Charles Frederick Green and author Vic Jay, the common link was a Lancaster Bomber. Helped along by a stroke of serendipity.

He managed to identify and find the families of five of Bob Jay’s six fellow crew members but beyond a name – Don Cook – was drawing a blank on tracking down number six. Satisfied with the anecdotes and stories he’d gathered, he set about beginning to write his book, The Mallon Crew.

Then, an email came out of the blue: ‘Hi there, my name is Mike Cleary, I have a friend who is mentioned in your blog. His name is Charles Frederick Green D.F.C. I am trying to find out how I might get a copy of his citation for the Distinguished Flyers Cross he was awarded.’

“I had no intention of trying to find out about anyone else loosely linked to the crew – and then this email came,” said Vic.

Mike Cleary was the son of two over 60s club members in Poulton-le-Fylde, a town about six miles outside Blackpool. A group which Charles Frederick Green also went to.

Charles was not, as first thought, the elusive sixth Mallon Crew member. But, as Vic discovered, the mid under gunner was actually an unknown seventh member of the crew, who’d flown with his father on three missions.

The two began their relationship with an “emotional half hour phone call”, before Vic and his wife travelled to Poulton-le-Fylde, where Charles relocated to after the war, to visit him.

“He reminded me of my dad. Or, more my grandad – because sadly, I never saw my dad as an old man,” said Vic, whose dad died at the age of 55.

“He has a great sense of humour, he’s so generous. He took us [Vic and his wife] to the pub for lunch and wouldn’t accept any payment. He’s an old chap living in his house with just a pension. We were so moved.”

Vic went on to dedicate a “special chapter” to the seventh member of the Mallon Crew in his book but there was a single condition placed upon the author – he wasn’t to “embarrass” Charles by making him “a hero.”

“You don’t shout about what you did,” said Charles, speaking to the News about his wartime career. “Everybody did it. Everybody did their bit. If they hadn’t, who knows what would have happened.”

Charles was born in Kings Cave Road in Peckham in October 1921. The Milwall supporter (“I still keep an eye on the boys, even now,” said Charles) went to Peckham Park Primary School and left school at the age of fourteen to follow in his father’s footsteps as a printer.

He worked as an apprentice for Brown, Knight and Truscott Printers in Cannon Street and volunteered for wartime duty in 1941 before getting “sent for” in 1942.

During his career, Charles served as a mid-under gunner – one of the most dangerous jobs of the war. During operations, he would be situated in a space, alone, in the bowels of the plane – an area of aircrafts that the Germans systemically targeted for its vulnerability.

Charles and his wife Marjorie in 1945

Charles, winner of two prestigious medals – the Distinguished Flyers Cross (DFC) and the Legion of Honour, awarded by France – will not be drawn upon to romanticise his wartime duty.

“Was I proud to win the medals? Yes, I suppose I was,” he said, unwilling to say anymore on the matter.

He’s more than willing to share funny anecdotes, though. “On one occasion, we got lost,” said Charles. “We left the German target and Mitch [the pilot] said ‘I’m afraid we’re lost’. So we said – ‘get cracking and find out where we are!’ ” “Then, the bomb aimer said – ‘look ahead. What are all those lights?’ – and the navigator said – ‘I’ve got it! That’s Switzerland!’ ”

As with all good stories, there was love involved. When the war ended and Charles was de-mobbed, he joined his future wife Marjorie, whom he’d met when serving at RAF Leeming in North Yorkshire, in her native Sheffield, where he resumed his printing apprenticeship.

So, what does Charles think of the book? “I have it framed! I’m reading it now. I’ve got bad eyesight, though, so I can only read a bit at a time,” he said.

The Mallon Crew grew into a project well beyond what Vic Jay had initially foreseen.

“The whole thing’s been really emotional because it’s enabled me to connect with my dad again,” said Vic. “There are so many thousands of stories that could be written about these men. The members of the crew’s families are grateful that their stories have been told.”

The Mallon Crew can be bought from Ian Allan Books and Models shop on Lower Marsh, Waterloo.