Flames engulfed the large six-floor building, which used to be a cold store. With bricked up windows, the building became an “impenetrable windowless fortress” and proved difficult for firefighters to gain a foothold 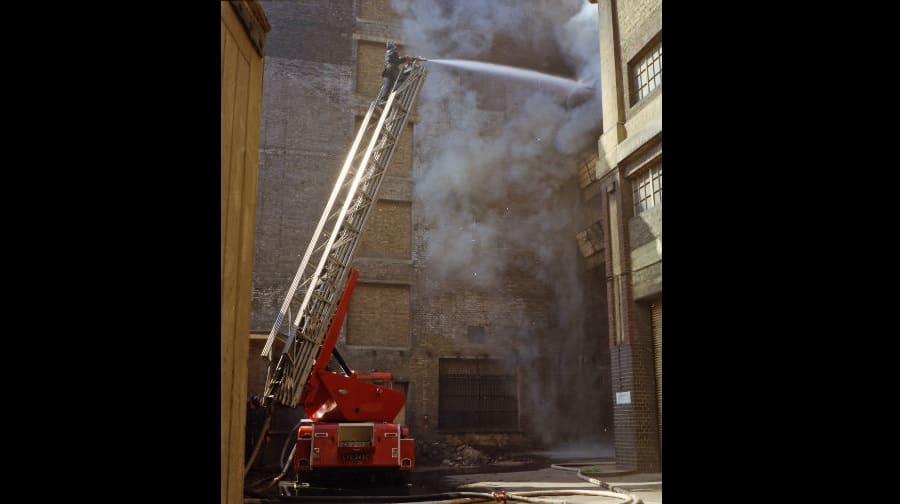 This year not only marked the 150th anniversary of the London Fire Brigade, but also the 45th anniversary of the infamous Wilson’s Wharf fire of August 9, 1971. The great blaze at the present day Southwark Crown Court on Battle Bridge Lane, took more than 300 firefighters to tackle, with crews on scene for three days.

The fire was started when construction workers were removing insulation from piping in the unoccupied refrigerated warehouse and sparks from their gas-powered cutting tools caused tape attached to the lagging to ignite.

Flames engulfed the large six-floor building, which used to be a cold store. With bricked up windows, the building became an “impenetrable windowless fortress” and proved difficult for firefighters to gain a foothold.

Deputy Chief Fire Officer Harold Chisnall and his staff officer assess the fire. In the background a turntable ladder and the outline of the Tower of London

One attempt to gain control of the fire was to break through one of the blocked windows with the help of two construction workers and a pneumatic drill. The plan was abandoned, however, after cracks in the wall began to appear and concerns were raised that the wall would collapse.

Liam Hackett, a firefighter based at Paddington fire station at the time and who was part of a relief crew, said: “There was great difficulty trying to get in to the building. The job was very smoky and acrid as you would expect and those of us that I could see were not wearing breathing apparatus.

In the distance a firefighter is using a radial branch, special piece of equipment used to hold jets that spray large volumes of water, aimed toward the flames

“That was normal back then because we only carried three sets on the pumps, the pump escapes had none.”

Liam was tasked with manning a radial branch, a piece of equipment designed to hold very large jets, and pour water through one of the hoist latches that overlooked the Thames.

Almost 100 fire stations had been involved, either directly or indirectly, in the blaze and nearly all senior officers attended the fire at some stage.

At its height, the plume of smoke pouring from the building could be seen across the capital, with reports of the smell of smoke received from as far afield as Bethnal Green and some underground stations in the City.