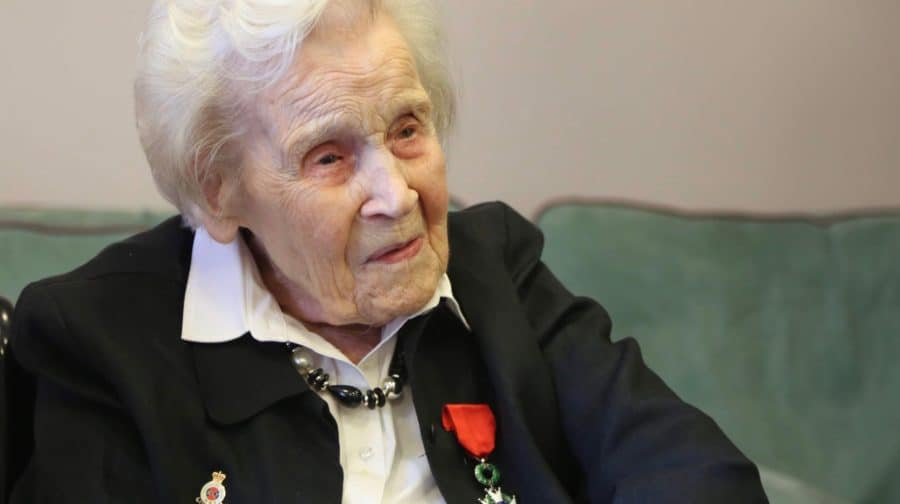 Helene Aldwinckle with her Legion D'Honneur

Helene Aldwinckle (whose first name rhymed with ‘keen’) played a key role in defeating the Nazis in the Second World War through her work as a codebreaker – but wasn’t allowed to tell anyone for decades after the war ended.

Helene went on to work as a broadcaster, translator and school teacher, and managed an art gallery. She and her husband settled in Dulwich in 1979 and lived in the area for decades. She died in April 2020 aged 99.

Helene was born in Aberdeen and studied languages at the city’s university, where she was recruited by the Foreign Office as a codebreaker in 1942.

Her first interview was in London, which was the furthest south she had ever been. She had no idea of the job’s importance or what it entailed. 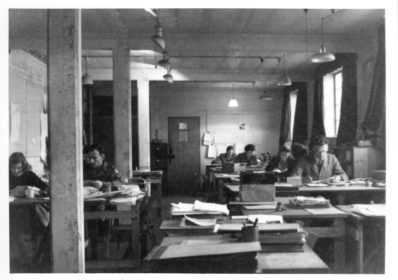 Flustered after a bad night’s sleep in London, she accidentally left her handbag behind in the restaurant where she had lunch before the interview, but luckily a kind doorman at the Foreign Office called to arrange for it to be held for her until she could pick it up on her way home.

In the interview itself she was questioned by at least twenty men. Her son Richard said in his family history that she had been told to make a good first impression – so “she sat down with a straight back, carefully removed the strap from her shoulder carrying her gas mask and placed it on the floor and, as she had been told to do, removed her gloves finger by finger.”

Most of the questions were about maths, crosswords, and languages, Helene said. Asked if she had previous work experience, she told the men she had only picked raspberries in the school holidays – which led to a discussion among the interviewers about the merits of Scottish raspberries.

Another interview followed in Aberdeen, and Helene was soon told to pack her bags to start her new job as a permanent Foreign Office civil servant. Charmingly, or perhaps patronisingly, the Foreign Office also sent her parents a card to tell them she would be well taken care of.

Civil servants met her at Bletchley station in Buckinghamshire and bundled her in the back of a car before driving her to Bletchley Park – the home of the government’s codebreaking work. 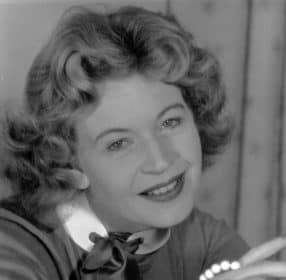 Helene was immediately put to work analysing the codes Germany used to keep its messages and orders secret. The aim of the work was to decipher the complex code to help Britain and the Allies understand what Germany was doing and gain an upper hand in the war. The code changed every day – meaning work began anew each morning.

In 1943 Helene was given a new job – training the Americans who had arrived at Bletchley Park as part of an agreement between the British and US governments. At first the British were nervous that the Americans might give the game away.

Helene said she loved having the Americans there and that they were keen to learn.

“They were full of banter and used to flirt at every opportunity, e.g. trying to accompany me to lunch,” Richard recorder her saying in his history. “But it was always in good jest. They were enormous fun, a breath of fresh air in a rather stuffy environment.”

After the training programme ended Helene was moved to the Quiet Room, a part of Bletchley Park where analysts looked at more complex sections of code that needed more time to decipher.

Before she even moved to Bletchley Park, Helene had met and begun a relationship with her future husband John, who by this point was a navigator in the RAF. They were engaged in 1943. But even though they wrote to each other almost daily, neither was allowed to tell the other anything about what they were doing.

They married after the war was over, but in those days married women weren’t allowed to serve in the Foreign Office so she had to leave. Richard said that his mother was not too disappointed to resign her post.

John got a job with British Intelligence and the family – which by this point included four children – moved to West Germany. John was part of a network of agents whose aim was to stop West Germany being overrun by the Soviet Union.

She was not content to be a stay-at-home mother and worked as a broadcaster for English- and German-language radio while the family was away. The family moved between England, France, Italy and Belgium over the next two decades with John’s postings, and Helene continued to work.

She was a teacher at a school near Huntingdon for two terms in 1966 and also translated two large art books from German to English. One was on the avant-garde Russian artist El Lissitzky and both were successes.

Helene and John moved to Dulwich in 1979. By this time she had moved into the art world, first as a sales assistant at the Medici Gallery in 1974. She was soon promoted to assistant manager, and in 1979 became manager. As well as her work putting on exhibitions, she devoted herself to encouraging and supporting young artists. Helene retired in 1986 to spend more time with John, who had also retired by this point.

They lived together in Dulwich for nearly twenty more years before John’s Alzheimer’s sadly meant he had to be looked after in a care home. He died in 2012. Helene continued to live in the area and moved to a care home herself in 2014 after developing dementia. She died on April 24, 2020.

Helene’s work was kept secret until 1974, nearly 30 years after the end of the war, when the story of Bletchley Park was published. In later years she was formally recognised by both the British and the French governments for her vital work in helping win the war.

France awarded her the Legion D’Honneur, the country’s highest honour, in 2019. Gordon Brown sent her and all other living Bletchley Park veterans a letter with a badge in 2009. Theresa May also thanked Helene for her service in her final Prime Minister’s Questions.

To vote for Helene Aldwinckle or any other Southwark blue plaque nominee this year, please email kit@southwarknews.co.uk or admin@southwark.org.uk with the name of the person you want to nominate.