Up to 3,000 people died when they were trapped by fire on London Bridge 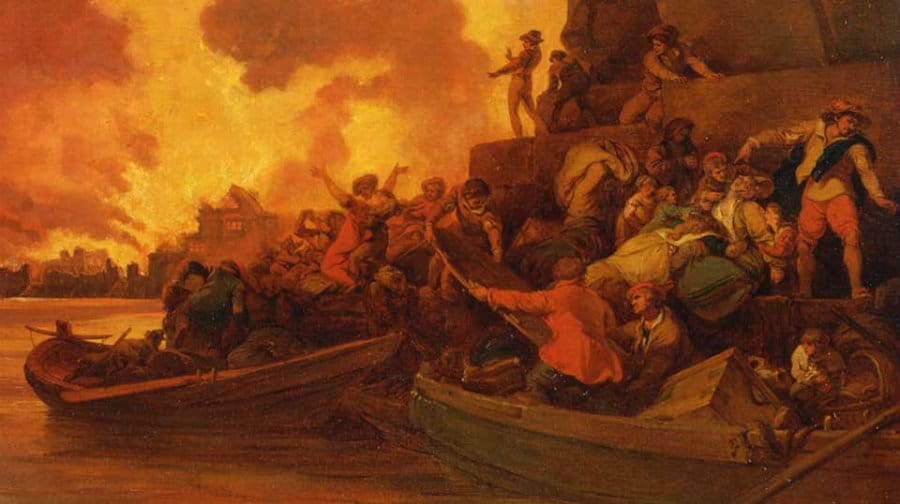 Everyone knows about the Great Fire of London – or, at least, they think they do. A huge blaze in 1666 devastated the city, destroying 13,200 homes, 87 churches and St Paul’s Cathedral. Temperatures in Pudding Lane, where the fire began, reached 1700 degrees Celsius during the peak of the inferno, while smoke could be seen as far away as Oxford.

But while it was certainly a huge fire, only six deaths were recorded. While nothing to be sniffed at, this death toll pales into startling insignificance when compared with a far, far more deadly blaze that occurred in the city several hundred years earlier.

On July 10, 1212, up to 3,000 people are thought to have perished in a terrifying fire that broke out in Southwark, before crossing London Bridge into the City. Around 7.5% of the city’s population perished in horrific circumstances – the equivalent of 637,500 people dying in a fire today.

For hundreds of years this blaze was known, rightly so, as the Great Fire of London. It is only the passing of the centuries that has extinguished the memory and devastating impact of the single deadliest fire in British history.

Also known as the Great Fire of Southwark, the blaze took place in a London very different from today. London Bridge was unrecognisable from its present day form, with the bridge packed with huge wooden tenement blocks and shopping quarters.

Historian Toni Mount sets the scene in her book Everyday Life in Medieval London: “Shops and houses crammed both sides of the narrow thoroughfare across the river, their upper storeys jutting out, some even adjoining their opposite neighbour, enclosing the road beneath and making it a gloomy tunnel, restricting the light.”

Shops, as many as 67, crammed the bridge at the time of the fire, seeking to make the most of the generous foot traffic passing across the filthy Thames. It was this packed, jigsaw arrangement of wooden homes and shops that would prove fatal to so many.

Unlike the second Great Fire of London, which has been traced to a single oven in a single bakery, the cause of the 1212 blaze is unknown. All that can be determined from records is that at some point on that July afternoon, a portion of Southwark – then known as South Warke – was suddenly ablaze.

The church of St Mary Overie was destroyed, while much of Borough High Street was levelled. Residents of Southwark, forced north by the blaze, fled onto London Bridge and started making their way across. On the bridge, along with the usual thronging crowd of traders and residents, were people rushing south from the City towards the fire.

While it may be kinder to say that the crowd were hurrying to help extinguish the fire, as undoubtedly a number were, it can be assumed that a huge number were more interested in rubbernecking as the blaze destroyed the north of the borough.

London Bridge was crowded at the best of times

The bridge, crowded at the best of times, was suddenly as packed as it had ever been since it was constructed three years previously. The conditions in the narrow streets must have been horrific, with the huge crowd jostling for space and panicking livestock destroying stalls and shops.

When a fierce wind carried sparks across the bridge, sparking a fire at the northern end of the bridge and trapping thousands of people in the dark, crowded alleys, the scenes must have turned hellish. The fire ate its way inwards from both ends of London Bridge, pushing the desperate residents closer and closer into the depths of the bridge.

A huge number of people died from the flames and smoke, others from the crush and others – with a heavy and tragic dose of irony – drowned in the rushing but useless water beneath the bridge.

Ms Mount said: “Boats on the river tried to rescue those who were trapped on the bridge, but so many terrified people jumped into the boats that many were capsized or sank, drowning the crews along with those they tried to save.”

When the fire burned itself out and the smoke lifted, there was not much remaining on the bridge other than its stone foundations. All the houses were destroyed, along with a chapel, while there was little trace left of those unfortunate souls who had been unable to escape the bridge.

Ms Mount said: “Afterwards, half-burned bodies were found in the wreckage of the buildings, often no more than piles of ashes, unidentifiable. For years afterwards, although still usable as a means of crossing the Thames, London Bridge remained a partial ruin, with no money for repairs.”

Thatched roofs were banned that year but it was too little, too late. In truth, London did not respond in any real way to ensure that such a blaze never happened again. In the 17th century, in the lead-up to the second Great Fire, fires were still being fought with buckets and hand-held pumps.

In the end it was the blaze in 1666 that changed the capital’s mindsight and helped develop a thought-out firefighting system. For the 3,000 people who died in the flames and the water in July 1212, however, these developments came far too late. The tragedy of the fire is that the huge loss of life was not only unnecessary but has now also been forgotten.