The day sixty-seven died at church 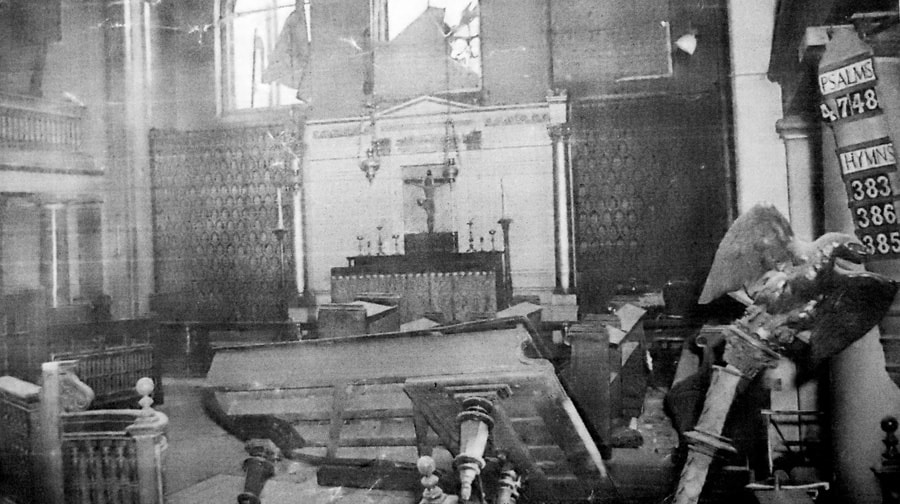 SEVENTY TWO years ago, there lived a rector at St Peter’s church in Walworth whose bravery and leadership matched his ability with a pen.

During the Blitz the church became an extraordinary focal point for the area. Its cavernous crypt was the most sought-after sanctuary over any Anderson shelter during the daily raids, and no doubt its presence preserved many families’ lives.

But as its rector from 1937 to 1944, the Reverend John Gabriel Markam recalled in his scarcely circulated memoirs that St Peter’s saw its fair share of disasters.

Markham’s memoirs first paint a picture of Walworth as a working class district of 11,000, where rows of terraced houses sprung up along what was Walworth Common in the 1820’s.

It was Markham who volunteered the church crypt to the authorities as a public shelter, just as it had been in World War One.

It was first designated to shelter for 230 before the first air-raid sirens rang on September 2, 1939. The crypt ran the length of the church and its insides were supported with four aisles of brick arches supporting the six-inch thick ceiling of 15 foot blocks of York stone. And there was no water or electricity inside.

“We had all been indoctrinated into this idea that it would all start with a massive bombing of London,” Markam wrote with a touch of humility. But the following months, he said, came to be known as the “phoney war” and the people’s urgency “slipped away” as the sirens fell on deaf ears.

In July 1940, Markham wrote, “the Battle of Britain began”. He neglects to give an exact date, but he says the air raids started “on a brilliant sunny day with the distant rumbling of anti-aircraft guns. The sirens wailed… the crypt from then on held anything between 600 and 900”.

What he most loathed about the nightly raids was the “continual drone” of aircraft and “the crash of bombs preceded by their eerie descending whistle and whoosh” which would last from 6pm until 6am. He vividly remembers treading delicately over bodies sleeping in the crypt “like sardines” lying on carpets, blankets and mattresses, while some slept in deck chairs or lay on narrow wooden benches.

But on October 28, the church took a direct hit, and Markham relives the chaos that ensued. From outside in the church yard he saw two bombs crash through the ceiling and “orange flashes” erupt from the windows. “Then I heard a confused murmur from the crypt, and a dusty figure struggled among the sandbags in the doorway at the steps leading to the shelter,” he said.

Markham gave an estimate of 200 casualties to the telephonist, and began leading the rescue effort with doctors and wardens to get the buried civilians out, and into a make-shift triage at the neighboring school. Next morning there were new estimates of 250 seriously hurt and 70 killed, later confirmed to be 67 dead – including an 83-year-old and a baby of 11 months.

Both “semi-armour piercing bombs” had exploded on the floor of the crypt, having gone through the church ceiling. One had pierced straight through the church organ, sending shards of pipes everywhere, and detonated next to where a family of six had slept, “blowing them to pieces”.

The blast had “literally lifted the whole church, causing the brickwork to part” and it wasn’t for several weeks until the church could be put to use.

Despite the tragedy, Reverend Markham says St Peter’s remained the centre of his faithful congregation throughout the war. “We were much more fortunate than the majority of the churches in the neighbourhood, which were either completely blown to pieces or burnt,” he concluded.

I used to go to St Peters School, at the back, and often was in the church.
I do not remember Rev Markam, but another Rev: used to visit my Grandma often in Date Street