London under attack – how V2 bombs brought destruction to the capital

New exhibition tells of weapon's devastating effects on the borough 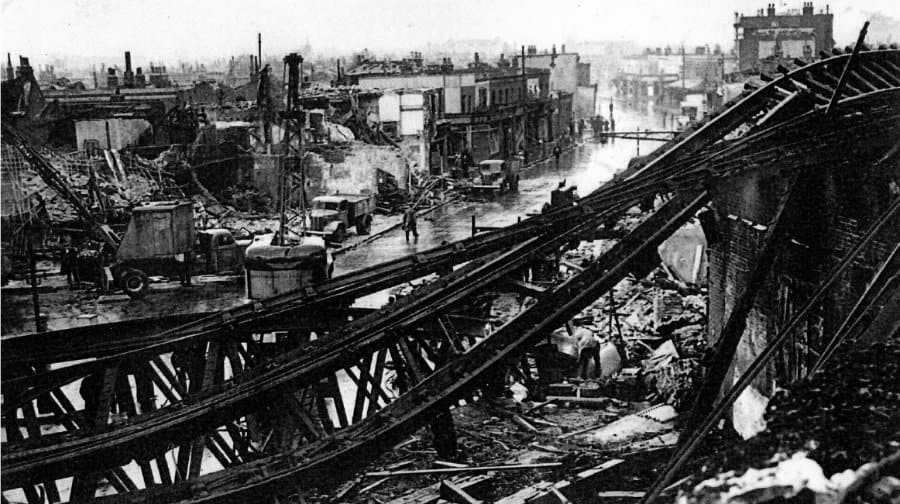 LESS THAN a year before allied forces reclaimed Europe, the world’s first ever ballistic missiles, launchable from hundreds of miles away, and able to penetrate the Earth’s atmosphere, were beginning to fall on London.

At fourteen metres from nose to fin, weighing 12,500kg and equipped with sophisticated targeting systems, they were arguably the most influential military invention of WW2, setting the path for technology used in America’s space exploration.

Records of tragedies in Southwark are among the items in an exhibition that has been collected and curated by Françoise Dupré, the niece of a French military prisoner Robert Berthelot, who endured and survived life in concentration camps.

Her work for the DORA art project is inspired by her visit to the Mittelbau-Dora Concentration Camp Memorial in Germany, where her uncle was imprisoned.

The tortured image of mangled brick-work and steel was taken after a blast on the John Bull Arch railway bridge across Southwark Park Road was struck on November 5 at 10.55pm.

The blast catapulted a panorama of shrapnel, and debris across 123 surrounding houses and shops, as well onto the Shuttleworth factory. Three were killed, 51 were injured, 16 of them seriously.

On the evening of Sunday December 17, as workers would have been turning for home, the R White’s water bottling factory in Albany Road and Bagshot Street was destroyed beyond repair by a V2 hit.

Such was the immensity of the explosion that some 40 little terraced homes were taken with it. Families huddled in their garden Anderson Shelters up to 400 yards away had felt the effects. The level of destruction was counted as 17 killed and 50 injured; 22 of them seriously. Today, the area forms part of Burgess Park.

“In London people remember the Blitz, but that was only stage of the war. There was this later stage of V2s,” said Françoise.

Indeed, the raids were less frequent, and came with almost no warning, but a skim through the statistics shows their destruction was far more wide-ranging.

Not all targets turned out to be strategic, and residential spaces like Lordship Lane in Dulwich were similarly left cratered by a strike on January 4. Two days later, a Peckham neighbourhood between Azenby Road and Lyndhurst Road was razed to the ground.

What had been the site of a railway workshops and railway carriages, as well as a toilet paper factory were severely damaged, along with 150 homes. Incredibly, none were killed, but 41 were injured.

Part of Azenby Road was rebuilt as Warwick Gardens in 1963.

The collection form the DORA projects lists 21 separate strikes in the historic Camberwell and old Southwark areas alone. Françoise’s fascination for the V2 comes from her uncle’s accidental contribution as a slave labourer to the construction of Nazis’ V2 rocket project.

She says two-thirds of those who were victims of the V2s were the men enslaved by the Nazis, handpicked from concentration camps, and forced to dig the vast, secretive factories where they were the rockets were developed at the Peenemünde Military Test Site.

“My uncle worked in a huge underground factory. It was extraordinary in scale,” Françoise said. “He was involved in digging the tunnels where the colossal V2s were developed at the Peenemünde on the Baltic island of Usedom.

“My father was selected for his engineering ability. He was taken from another camp called the Buchenwald and was moved from digging to the assembly line.

“The aim was to link the two sites of terror: the concentration camps, with south east London, where there were a lot of hits, and was a working-class area and had a huge impact on people’s lives.

“At the same time I wanted to tell the story of the V2 and my uncle’s journey.” You can visit the DORA project exhibition at the Peckham Platform in Peckham High Street, until it closes on May 15, and find out more by visiting doraproject.wordpress.com.