East & West India Dock Co. announced a pay cut of around 25 percent to try to rescue their falling profits. 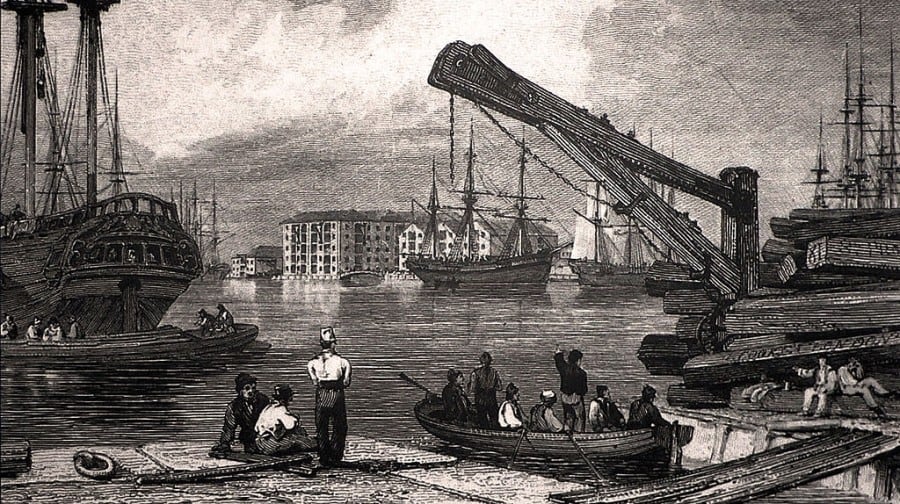 Whole books have been written about the dock strike of 1889, but seventeen years earlier casual workers facing a massive pay cut formed the first docker’s union and bravely took industrial action to put change in motion for the poorest workers.

In the early 1800s Surrey Commercial Docks, like many others, was staffed mainly by casual workers – with just enough men taken on each day for the available work. With ten men lining up for each job, no worker was in any position to strike. But in 1871, the East & West India Dock Co. announced a pay cut of around 25 percent, to try to rescue their falling profits.

One docker, a Mr Caulfield, organised a meeting but concluded nothing could be done. “These men are comparatively helpless in the matter,” wrote the Eastern Post. “They are so poor that a strike or even a combination with a view of joint action is not to be thought of. They can only appeal to the companies to reconsider the whole question, and ask the public to sustain their appeal.”

After two further meetings, the Labour Protection League (LPL) was established, with Caulfield as Secretary. The sole purpose of the League was to oppose the reduction in dockers’ wages, but Caulfield saw an opportunity to line his own pockets and ran off with the organisation’s meager funds. Despite this set back the dockers persevered and by 1872, the LPL had branches in Southwark, Wapping, Horsleydown and Greenwich.

They began a series of strikes in June of 1872, winning a penny or so a day on daily rates as low as three or four pence an hour.

The cuts imposed by the big player – the East & West India Dock Co – were rescinded but it would not budge on a minimum wage and the much disliked system used to obtain and pay the casual workers for the ship yards.

Particularly in the timber trade, the hiring was done by “contractors”, usually dockside publicans, who had an agreement to supply willing men as needed to work in the shipyards.

This suited the shipping companies because they never knew exactly when ships would dock, so for a one-off fee they had casual labour on tap.

But for the ‘lumpers’ who unloaded the cargo of heavy timber from the ship’s hold, it was beer they had on tap. With many lumpers contracted out by the same pub landlords who served them ale all night long –their wages often went straight back behind the bar.

In 1851 Henry Mayhew, author of ‘London Labour and the London Poor’ (1840) interviewed a lumper who gave a reluctant account of his role.

He wrote: “The lumpers…are so besotted with the drink which they are tempted to obtain from the publicans who employ them, as to look upon the man who tricks them out of their earnings rather as a friend than as an enemy.”

Mayhew had to “cross-question” a lumper, who was afraid of being discharged by his contractor, to get a reliable account from him.

“He was evidently in fear of losing his work; and the tavern to which I had gone to take his statement was filled with foremen watching and intimidating him.

He said: “I am a working lumper, or labourer at discharging timber or deal-ships. I have been sixteen years at work. I should think that there are more than 200 men ….who are constantly engaged at the work…..In summer a great many Irish labourers seek for work as lumpers. They come over from Ireland in the cork boats. I should say there are altogether upward of 500 regular working lumpers, but in the summer there are at least 200 more.””

Thankfully there was plenty of work to go around from July to January, but between January and July, the lumpers had very little to do, when they would try to get whatever work they could to keep them going. In the summer time, the working day for a lumper was 6am to 6pm and from daylight to dark in the winter. The lumpers worked in gangs under foremen who were sometimes the publicans who contracted the workers. “We are usually paid at 7 o’clock in the evening,” the anonymous lumper told Mayhew.

The 1872 strike was the beginning of trade union protection for the poorest dock workers like the lumpers, leading to companies employing more permanent staff and setting the stage for the biggest dock strike in history seventeen years later in 1889.