Mad, bad and dangerous to know... in Dulwich? 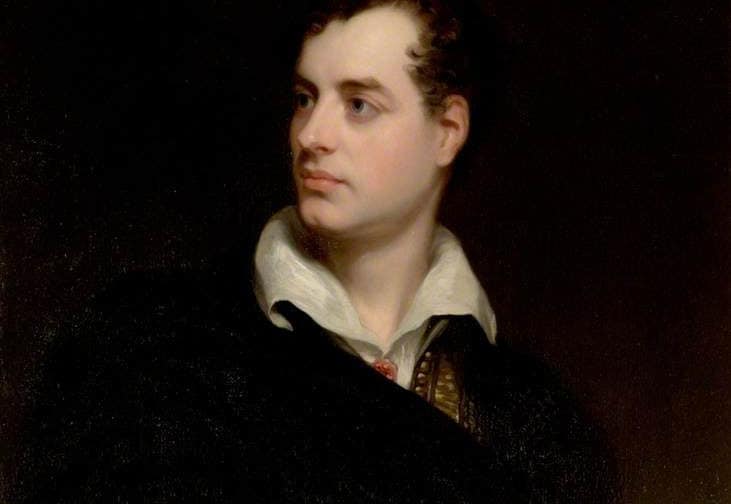 Lord Byron by Thomas Phillips circa 1813

It’s a pub that’s been a boarded-up shell for years at the corner of Lordship Lane and Sydenham Hill Wood.

But did you know it was once home to one of England’s most notorious writers and lovers, the man for whom the phrase “mad, bad and dangerous to know” was coined?

Although more often celebrated for his connections to Italy and Greece, it could be argued one of our greatest poets may have owed something of his talent to a short tenure at school in East Dulwich.

Born on January 22, 1788 in London, George Gordon Byron inherited his title after the deaths of his profligate father – when he was just three – and great uncle, who was known as “the wicked Lord.”

The young 6th Lord Byron was shipped off to Dr Glennie’s Academy in 1799, and spent just two short years at the small boarding school until 1801, when he wrote to his family: “I am going to leave this damned place at Easter and am going to Harrow.”

Byron was initially sent to the East Dulwich school so he could receive treatment for his “club foot” from the best doctors in London. Treatment was largely unsuccessful and the disability dogged his self-esteem for life.

Unlike the other boys, the young George had a bed and room of his own – even if this meant sleeping in Dr Glennie’s study.

Dr Glennie, a well-travelled Scotsman, wrote to one correspondent of his new charge: “I found him enter upon his tasks with alacrity and success. He was playful, good humoured, and beloved of his companions.

“His reading in history and poetry was far beyond the usual standard of his age, and in my study he found many books open to him, both to please his taste and to satisfy his curiosity.” Although Byron was yet to rebel in any great measure, Dr Glennie did have his hands full with his mother, Lady Byron, who would often remove her son from school for weeks at a time, and was known to cosset and over indulge him.

Byron was behind his peers when he arrived at Harrow. There, his headmaster, Dr Joseph Drury, said upon the arrival of the thirteen-year-old: “I soon found that a wild mountain colt had been submitted to my management.”

By the time he entered his teens Byron had a reputation for wilfulness, disdain for authority, and voracious appetites for many vices. He was not considered especially academically gifted.

As was usual for a noble, Byron studied at Cambridge University despite his lacking academic performance, where he dedicated his time to pursuits of sport, drinking, gambling and sexual escapades with both sexes.

He could be charming and infuriating in equal measure, writing of his character: “I am so changeable, being everything by turns and nothing long, – I am such a strange melange of good and evil, that it would be difficult to describe me.”

Like many aristocrats and gentlemen of the age, after completing his studies Byron embarked on a “grand tour” of Europe, and spent two years in Mediterranean, where he began writing Childe Harold’s Pilgrimage.

After publication upon his return in 1811 fame and acclaim was instant, and poetry quickly overtook the parliamentary career he had envisaged for himself in the House of Lords.

Despite his limp and yo-yo dieting, the dark and handsome poet already had a reputation as a dashing lover.

The next few years were some of his most productive with many of his works, like She Walks in Beauty, today considered cornerstones of the Romantic Movement. But his time in England was short lived.

It was considered a good match, but their marriage was dogged by his infidelity and rumours of an incestuous relationship with his half-sister, Augusta Leigh, who had given birth to a daughter rumoured to be his.

Byron and his wife sensationally separated in 1816. She stayed in England with their infant daughter Ada, and he went into exile abroad, living in Switzerland with his fellow poet Percy Bysshe Shelley.

Years of wandering – including fathering an illegitimate daughter who died in infancy – and numerous affairs across Italy, eventually led to him back to politics.

In 1824, Byron threw his support behind the Greek independence movement against the Ottoman Empire, even selling off some of land and assets to raise capital for the cause. His wealth, celebrity and nobility helped garner support for the Greeks, and huge publicity.

The same year he took control of part of the rebel army, defending against the Turks’ attacks, but fell ill with a fever and never recovered, dying on April 19 in Missolonghi, western Greece. He was 36.

Today, he is still celebrated in Greece as a national hero and across the world as one of the original tortured poets and true Romantics – a far cry from the lacklustre pupil from a small boarding school East Dulwich his Harrow headmaster recalled.

Some of the lesser known facts about Byron

Overweight in youth, Byron was an early adopter of the fad diet. At one point he drank only vinegar, later moving onto the “mashed potato” diet. He also tried alternate binging and starvation, and chewing a type of gum to stave off hunger pangs.

A life-long animal lover, Byron kept a “tame” bear in his rooms at Cambridge after being told dogs were not allowed. While exiled in Italy he collected a menagerie of animals in his palazzo.

His great friend, the poet Shelley, wrote the home had “ten horses, eight enormous dogs, three monkey, five cats, an eagle, a crow and a falcon,” he went on to describe how he “just met on the grand staircase give peacocks, two guinea hens and an Egyptian crane”.

He was also fascinated by the dead, and regularly used his collection of skulls as drinking goblets. His family seat, the imposing Newstead Abbey, was said to be haunted and, hamming it up, he kept a coffin at one end of the great dining room where he practised shooting.

Byron’s wife was so appalled by her husband’s descent that after he left England he was refused contact with their daughter Ada.

Encouraged into the sciences, in an effort to mould her away from her father’s path, Ada went on to develop the prototype calculator and computer, the Difference Engine and Analytical Engine. Regarded as writing the world’s first algorithm, and therefore the first ever computer programmer, the programming language ADA was named after her..

Ada died at 36, like her father, and his father before him. Although she never knew Byron she was buried next to him at her request after years struggling with addiction and scandalous affairs of her own.