As we are now facing a global terror, we remember how 75 years ago Southwark rose from the ashes of a world war

Can something good really did come out of death and misery? 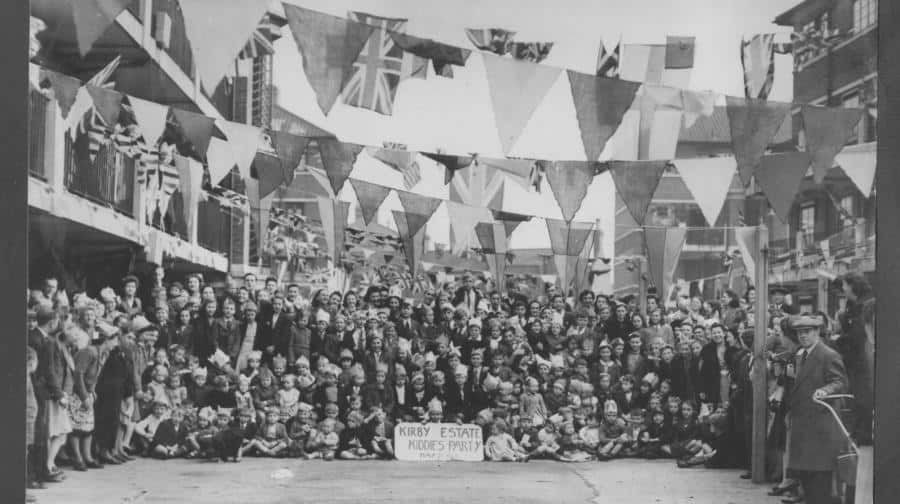 Among the historical archives of the paper there is one picture that captures the spirit of local people as a hard-fought war came to an end in May 1945 – the residents of the Kirby Estate celebrating VE Day.

Nearly 75 years to the day this same estate in Bermondsey is once more draped in flags as they give thanks to our NHS workers, fighting on a different kind of frontline, in our hospital – against the coronavirus.

The Second War like no other shaped the areas that now make up the London Borough of Southwark. Either through destruction and rebuilding or simply by our fighting spirit and a want for a better standard of life, post war Southwark came out of the ashes a very different place.

In September 1927, Bermondsey’s Dr Alfred Salter is said to have foretold the coming of another world war, where Southwark would become an area of “smashed buildings, wrecked factories, devastated houses, mangled corpses and bodies of helpless men.”

Come the year of 1940, his prediction became a reality, as Nazi bombs rained down devastation across London. The history of Southwark during the Blitz has been detailed by many. But historian Neil Bright’s book particularly apt, as it shows how the modern day borough was formed out of a number of unique tales during the war.

The first person to be killed in Bermondsey during the blitz was Sarah Hough, whose house in Storks Road had a bomb land on it. Although initially surviving and being rushed to St Olave’s Hospital, she died. Later that night, two bombs exploded in the railway over the Lindsey Street Arch air-raid shelter, where five seeking refuge lost their lives.

One Southwark street in particular experienced the Blitz in full force. Arnott Street, just off the Old Kent Road saw twelve die on the fateful night of September 6, 1940. Annie Leary was one resident who was paralysed in the blast, but embodied the famous Blitz Spirit. In an interview with the Daily Express a few weeks later she said: “Hitler can’t a break a Cockney’s Heart!”

The following day is remembered as a “lovely late summer, early autumn day” where football fans eagerly awaited the local derby of Millwall vs Charlton at the Den in New Cross. Alan Tizzard, a Rotherhithe boy at the time, recalled what followed:

“On that sunny summer afternoon I was sitting on the kitchen step whittling away at my model when the sirens sounded. No sooner had the sirens sounded than planes came into sight. They were high by the standards of the day, maybe 20,000 feet. They were twisting and turning, bobbing and weaving. To me this was a grand show.

“So far my sight of war had been at a distance and this knocked the cinema into a cocked hat. From the front of the house we did not see the approach of part of Luftwaffe Zwei; from across the Channel they came in from behind us. A sudden shower of spent cartridge cases rained down all around us. What had been the dull ever-changing drone of the fighters in dogfights high above our heads with their guns making no more than a phut changed to pandemonium.

“The stakes had changed. We were now part of it.”

As the Blitz’s intensity heightened, on September 7 during the night people were taking shelter at Keetons Road Rest Centre, a former peacetime school. The people were mainly evacuated from Downtown and were settling in for the night. Just after midnight a bomb exploded near the rear of the school which was quickly followed by another. Many were killed and injured as the centre was full of evacuees.

Horrified by the events at the school, King George VI paid a visit to the scene and is said to have been “visibly moved”. He spoke to the school caretaker, Mr Miles and his family, who recalled:

“The King spoke to me as man to man. You could see how shocked he was by the damage. He was kind and had a warm feeling for ordinary people no matter how humble. And I shall never forget the pain and suffering in his face when he caught sight of the bodies of the raid victims among the debris.”

As the first four months of The Blitz drew to a close, it was recorded that Southwark had taken a large number of losses. In Bermondsey 376 people had died, as well as 449 in Camberwell.

Countless more local people died here and on foreign fields as the war raged for nearly five years, but the people rose from the ashes and rebuilt a future that in many respects was more compassionate.  With the introduction of a welfare state and NHS it valued more those ordinary people that did so much during the dark days of a global conflict. If a comparison is to be made today, then many would hope that the same compassion and value for the people that have kept the country going during this current pandemic will be recognised and rewarded.  That a new world order following a short time of celebration will be fashioned, so we can look back 75 years later and say – something good really did come out of this death and misery.

Southwark NewsHistoryAs we are now facing a global terror, we remember how 75 years ago Southwark rose from the ashes of a world war