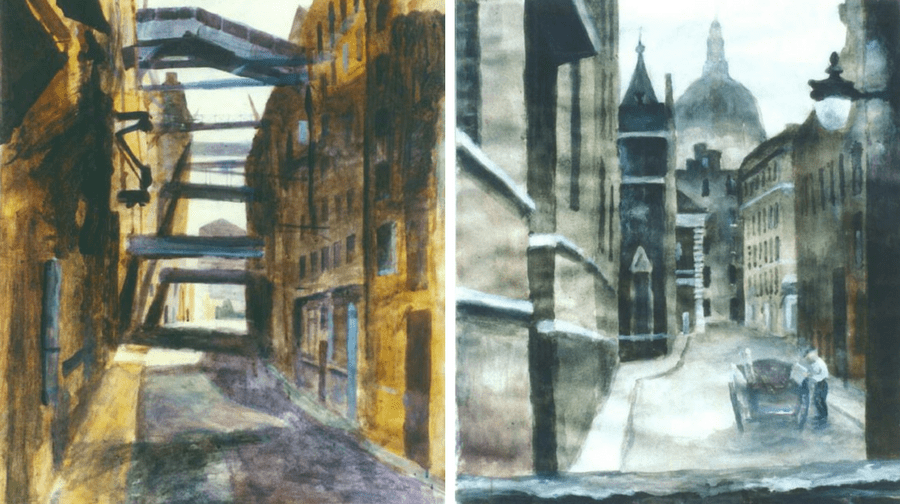 Terry Scales was just a child when he was evacuated to Devon from his home in Bermondsey at the outbreak of the Second World War.

He fell in love with country life, discovered a fondness for painting, and even got his first job.

But when he returned to Southwark as a twelve year old in 1945, he struggled to adjust to post-war London and turned to painting as a way of coping.

“I was evacuated to a town called Seaton, in Devon, during the war,” said the 84-year-old, who was born in Bermondsey but now lives in Greenwich.

“The Devon people were wonderful. They were very friendly to us and I quickly became friendly with a group of boys, one of whom had a whole family who were fishermen.

“I remember my first job was going out with the fishing boat and I would take one oar and my friend would take the other and we would all row and check whether the lobster pots had caught anything and my pay for that was one big mackerel for supper.

“We had a local cinema and all of us young boys used to go every Saturday morning and a film came on called Fantasia by Walt Disney.

“I was deeply struck by the images in it when the scene came on of Zeus throwing thunderbolts. It was so well done it really set my imagination off and I started trying to paint at that point. I would’ve been about ten or eleven then.

“Of course they were still child artworks really but it stuck in my mind so when I came back to London I lived in Rotherhithe very close to the river and I found that the river scenes of big ships passing up the Thames also excited me and I started doing drawings of those.”

Terry said he found London was “so different” from the city he had known when he returned after the war.

“It was so strange and aggressive and noisy that I really wanted to go back to Devon,” he said.

“I think it was the lack of green. There were trees in Bermondsey because they had been planted by Dr Salter but in Devon I had a very wild kind of free life.

“I would go out with a bottle of lemonade in the morning and wouldn’t return home until 6pm and all that time I would be in the woods climbing trees – but coming back to London everything was much more organised and that’s what I didn’t like.”

“A the age of thirteen I was taken on at the art school, which was considered the best school in England for serious art study at the time, and I did very well there,” he said.

Terry was called up for national service at the age of about eighteen or nineteen and was based in the signals section of the RAF at the Isle of Dogs.

When he came out of the RAF at the age of about 20 or 21 he spent some time working at a commercial arts studio on Fleet Street designing posters for the latest films.

“It was interesting but it was badly paid,” said Terry. “My family had all worked on the Thames as stevedores and dockers for hundreds of years and my father said ‘you need to earn some proper money and come into the docks’ so I went into Surrey Docks in 1955. I worked quite hard for five years and earned quite good money on quite dangerous jobs.

“During those five years the dockers had quite a few strikes and during one of those strikes at the end I called into my old art school to see tutors I knew there and one of the heads of department asked if I could teach for the day because a teacher had taken ill.”

Terry taught for the day and ended up signing a contract for a full-time position at the school.

A free exhibition of Terry’s artwork portraying Bermondsey dockers and street scenes will be on display at West Greenwich Library from May 9 to June 10.