It was a grisly murder that shocked Victorian England, and became known as the ‘Bermondsey Horror.’ 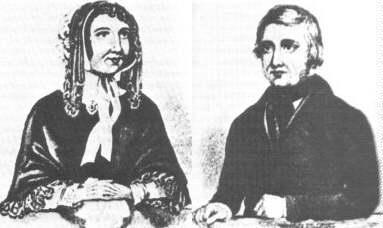 On August 9, 1849, a 50-year-old Irish customs officer called Patrick O’Connor sat down to have dinner in Bermondsey’s Miniver Place, off Weston Street.

His hosts were Maria Manning, a Swiss maid, and her husband Frederick, a guard on the Great Western Railway.

But Mr O’Connor never ended up dining with the couple that night: for as he stood to wash his hands before eating, Maria shot him point-blank in the head with a pistol.

The bullet did not kill the wealthy O’Connor, who was a money-lender alongside his role in customs on the docks.

So Frederick Manning finished the job, by battering him over the head with a crowbar until he was dead.

The body was later found by police under the flagstones of their kitchen – alongside Maria’s bloody dress.

It was a grisly murder that shocked Victorian England, and became known as the ‘Bermondsey Horror.’ Maria Manning was the mastermind behind the ‘Bermondsey Horror’

It attracted comment from the era’s leading lights, including Dickens, and the Mannings went down in the history books as the first husband-and-wife hanged together in England since 1700.

Why, then, would Maria and her husband Frederick kill O’Connor – whom Maria had been charmed by only years earlier?

Maria was born in Switzerland in 1821, and moved to London to work as a lady’s maid to the rich Lady Blantyre, the daughter of the Duchess of Sutherland.

She became obsessed with the trappings of luxury, and dreaded the idea of living in poverty. In 1846, she met O’Connor on a boat-trip to Boulogne with Lady Blantyre.

Maria was charmed by O’Connor, and she suggested they meet up next time they were in London together.

Months later he came to Stafford House, Bloomsbury, where she was staying and took her out to dinner.

Maria revealed that she had begun seeing Frederick. Both men were taken with the ‘plump’ Swiss maid, both making proposals to her over the next couple of weeks.

She faced a dilemma: she dreaded the idea of penury, and had to decide who could provide her with the lifestyle she had grown accustomed to.

Patrick O’Connor was clearly a man-of-means, but significantly older and a big drinker. Frederick did not earn a big salary and had the weaker of the two men’s characters.

However, he promised that he was due to inherit a substantial fortune from his mother. Maria made up her mind, and married Frederick in St James’s Church, Piccadilly, in May 1847.

The promised inheritance was a lie, one which the Swiss maid quickly realised. The pair were hanged at Horsemonger Lane Gaol, in Walworth

She began sleeping with O’Connor, apparently with her husband’s knowledge; in fact, he frequently came to visit them at their home for meals.

Sometime in 1849, Maria appears to have made up her mind that she had made the wrong choice of suitor – and that if she could not have O’Connor, she could at least have his money.

In July, a large bushel of lime was delivered to the Mannings’ home. On August 8, a shovel was delivered, and it was on this day that Maria asked O’Connor to come to Miniver Place.

The pair had intended to kill them – but their place was foiled as he brought along a friend.

So Maria asked him to come back the next day, supposedly so they could be more intimate together. By that evening, he was dead and buried in a pre-dug grave under the kitchen floor.

Their trial later heard that the pair then sat and ate their dinner as if nothing had happened.

But three days later, customs colleagues of O’Connor visited the Mannings to ask if they had seen their missing friend, as they knew he had dined there on the 9th.

Mrs Manning denied having seen him, but the visit threw the murdering pair into a panic, as they wrongly believed the pair to be undercover detectives. Maria ordered Frederick to go and sell the furniture for what it was worth; but while he was gone, she double-crossed him, taking three trunks of possessions and fleeing.

When he returned, he realised he was on his own, and in a frenzy, grabbed a few items, and caught the boat train to Jersey from Waterloo.

Maria had ordered a cab to King’s Cross and from there went to Edinburgh.

Detectives discovered that a woman matching Maria’s description had ransacked O’Connor’s lodgings, and went to their home on Miniver Place.

An officer noticed that the flagstones still had wet mortar around them – and quickly uncovered O’Connor’s body.

The cabbie who took Maria to the station told police that she had gone to Scotland.

Police telegraphed the Scottish authorities, who in fact already had her in custody, after she aroused suspicions trying to sell O’Connor’s possessions.

Frederick, staying in St Helier, in turn drew attention a week later to himself by drinking large amounts of brandy every day.

“I never liked him, so I battered his head with a ripping chisel,” Frederick told police when he was ensnared.

During the Old Bailey trial, the counsel for both husband and wife tried to blame the other. Mrs Manning was accused of greed, killing her lover for his money.

Mr Manning was accused of acting out of jealousy, unable to deal with the man his wife was sleeping with.

The jury charged them both with murder, and they were to be executed at Horsemonger Lane Gaol, in Walworth.

Maria wore a dress of black satin on the gallows. It’s claimed that this has caused the popularity of such dresses to fall in the years following, a claim which historians doubt.

Some also claim that Maria and Frederick made up on the gallows and that she kissed him before they were executed as a sign of forgiveness.

The execution was watched by a public crowd of between 30,000 to 50,000 people, some estimates suggest.

Among those in the crowd was none other than Charles Dickens, who was disgusted by what he saw.

“I was a witness of the execution at Horsemongerlane this morning,” he wrote in a letter to The Times.

“I believe that a sight so inconceivably awful as the wickedness and levity of the immense crowd collected at that execution this morning could be imagined by no man.”

Dickens was among those who campaigned against public hangings, and they were abolished in 1868.

He later based one of his characters, Mademoiselle Hortense, Lady Dedlock’s maid in Bleak House, on Maria Manning.

Southwark NewsHistoryThe 1849 Bermondsey Horror: How dinner at the Mannings turned into a deadly affair