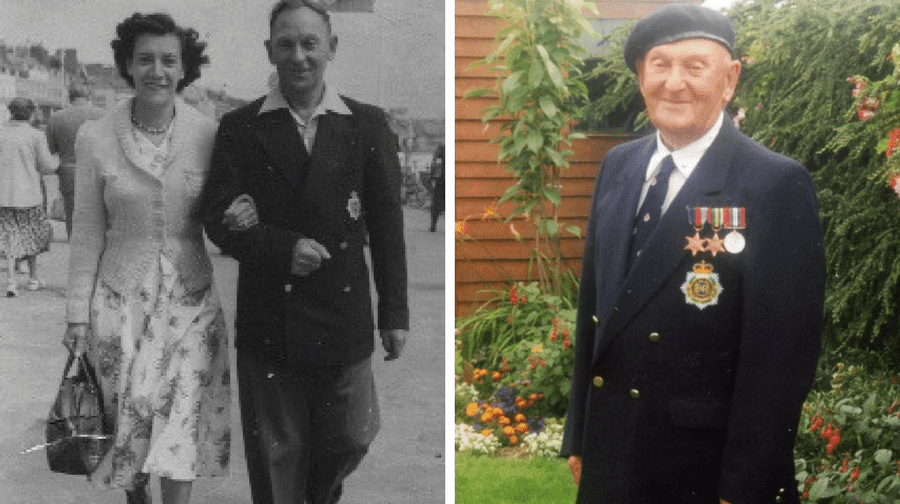 The family of a Bermondsey man have shared his war memories on the eve of his 100th birthday.

Horace George Hutley, known as Lyle Hutley, was born in Bermondsey on May 19, 1917.

He grew up as the second oldest of four siblings and left school at the age of fourteen to start work as a van boy, later becoming a delivery driver.

In 1939 he regularly saw a girl, Ivy Simmons, as he was cycling home to Lynton Road from work and eventually plucked up the courage to ask her out on a date.

Bill Ripper, who is married to Lyle’s niece, described it as “love at first sight: an unconditional love that lasted 60 years”.

In 1940, at the age of 22, Lyle was conscripted and joined the Royal Artillery Service Corp where he became a gunner/driver.

Later that year he was to be part of the British Expeditionary Force sent across the Channel.

Not knowing what lay ahead he asked Ivy if she would wait for him, and she said yes.

Lyle and Ivy on holiday together

“British forces were already in retreat towards the French coast and what followed was the evacuation of troops from Dunkirk,” said Bill, aged 76.

“Lyle recalls being stranded on the beach, his thoughts of Ivy waiting for him back home as he was strafed by German aircraft until he eventually managed to get aboard a boat and got safely back to Blighty.

“At the time of his return back to his barracks at Aldershot, Bermondsey was already being blitzed. Ivy and her family were bombed out twice but luckily survived.

“He managed to get some leave where they were able to be together again for brief periods but in 1941 he gave her the dreaded news that he was being posted to Africa.”

Lyle asked Ivy to marry him and the couple were wed at St Mary Magdalene on May 4, 1941.

They had two weeks of happy married life together before Lyle headed back to his barracks in Aldershot and later set sail for Africa. Little did they know, they would not see each other again for four years.

“Just as his ship docked in Africa, the orders were changed and the ship sailed on to Singapore where he arrived on February 5, 1942,” said Bill.

Ten days later, on February 15, 1942, Lyle became a prisoner of war at Changi Prison alongside thousands of others.

Lyle and his neighbours winning a gardening award in 2006/2007

“The captors gave all detainees a postcard to fill in to send to loved ones back home to let them know they were safe,” said Bill. “The one line to Ivy read, ‘PoW but safe. Hope you are too. Forever in my heart. My undying Love. Lyle’.

“However the prisoners had to sign a letter that there would be no attempts to escape which the British Commanding Officer refused to accept under the terms of the Geneva Convention.”

The postcards written by the prisoners were torn up in front of their faces and they were told they would never see their loved ones again.

For the next three years Lyle and many others were made to build the Burma Railway, known as the Death Railway because of the thousands who died building it.

Bill described it as “three terrible years in the Burmese jungle, suffering torture, a paltry starvation diet, having all his teeth fall out, made to work in all weathers despite being unwell, unmerciful beatings, malnutrition, leg ulcers and burying numerous pals along the way”.

Back in Bermondsey, not knowing whether Lyle was dead or alive, Ivy had become a fire warden as incendiaries and bombs flattened the area until the end of the war.

They were reunited when Lyle eventually arrived home in 1946, a bag of bones, weighing less than six stone.

Although food was in short supply, Ivy gave Lyle every morsel she could to build up his strength. After a slow recovery he managed to get a job making steel safety doors for dreadnoughts, where he remained until he retired.

Unfortunately, Lyle’s and Ivy’s marriage was never blessed with a family, but they were happy together until Ivy sadly died at the age of 77 in 1997.