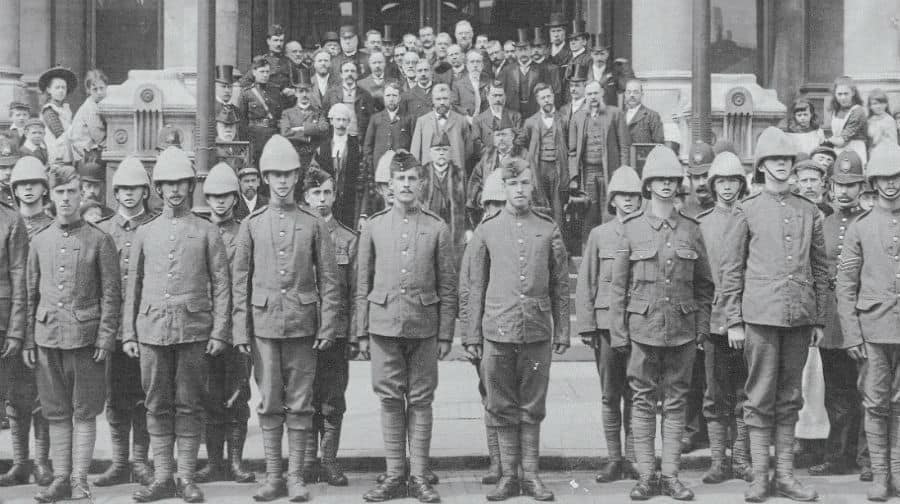 Many tributes have been paid to the Bermondsey men who fought on the battlefield on Europe as we mark the 100th anniversary of WorldWar I. We have delved into the archives to look at another war just over ten years earlier – the Boer War, writes Emma Ailes…

The ‘News’ has taken a look back at the history of the 3rd Volunteer Battaloin of the Queen’s (Royal West Surrey)?Regiment, and its involvement with the Boer campaign.

Bermondsey’s association with a volunteer army force had begun in 1794 when two Corps of Volunteers were formed by Bermondsey and Rotherhithe as part of a general raising of troops through fear of Napoleon, in order to protect Bermondsey families and the country against ‘invasion, rebellion or riot’ during the French Revolution.

When the panic died down the Corps was disbanded and it was not until 1860 that the two Corps were again established – the 10th and the 23rd Surrey Rifle Volunteers.

Over the years many changes took place, finally merging with other T.A units at Croydon and Guildford to form the 3rd Battalion The Queen’s -Royal West Surrey Regiment, with “D” Company at Bermondsey sharing the Drill Hall with the 44th Parachute Field Ambulance.

At the very end of Queen Victoria’s reign, the second Boer War broke out when the Dutch-descended Boers rose up against the British colonial rule. Patriotic fervour to protect the British Empire saw men all over the country signing up to fight.

3rd Volunteer Battalion of The Queen’s (Royal West Surrey) Regiment found many men for active service, and it was during the Boer War that their first Battle Honour “South Africa 1900-1902” was earned. Author and local historian Stephen Humphrey is closely linked to the event, as his paternal grandfather volunteered to fight:

“A substantial army was sent to South Africa in 1899 under the leadership of General Sir Redvers Buller to campaign from Natal against the Boer republics of the Orange Free State and Transvaal. For The Volunteers, it was the first time they had seen active service overseas. Bermondsey’s unit, the 3rd Volunteer Battalion of the Royal West Surrey Regiment, more commonly known as ‘The Queen’s’ was based at the drill hall that existed up until a couple of years ago on Abbey Street, at the junction with Jamaica Road. Amidst an optimistic and patriotic mood, the troops prepared to leave for Southampton, and eventually The Cape. Col. Samuel Bourne Bevington, Bermondsey’s first Mayor and former officer in The Volunteers, hosted a farewell dinner on January 18, 1900 at the Tower Bridge Hotel,  now the Weatherspoon’s pub on the foot of the bridge, (which included on the menu for the evening Mock Turtle Soup!)”

Percy Lane Oliver wrote in Surrey Magazine shortly after: “By the time these lines are published, the troops will probably have met the Boers in conflict, but of one good thing we may be quite sure – the “West Surrey” will never go back on their glorious record; they will return with fresh honours and distinctions, more than ever the “Queen’s Own.”

However as with the more recent military campaigns in Iraq and Afghanistan, initial hopes soon gave way to a prolonged and nasty struggle on the ground. Lord Kitchener sent British troops to destroy Boer farms and move civilians into concentration camps to quash the rebellion.

1900 The Queen’s advancing at the Battle of Colenso

Returning to Southwark two years later however, The Queen’s were met with cheering crowds, including many women who were reportedly not shy to show their gratitude with a kiss on the cheek and a uniform-clad arm around the waist!

In main picture above we see Second Service Section returning on June 2 1902. They arrived at London Bridge and marched along Tooley St, Dockhead and Parkers Row, accompanied by their band, before lining up at Spa Road, outside the Town Hall as we see them here. The day before the event, a treaty had formally ended the Boer War, bringing peace.

Southwark NewsHistoryBermondsey’s bit against the Boer