He considered the Russian people as being wretchedly poor, immoral, promiscuous, deprived of the most basic necessities 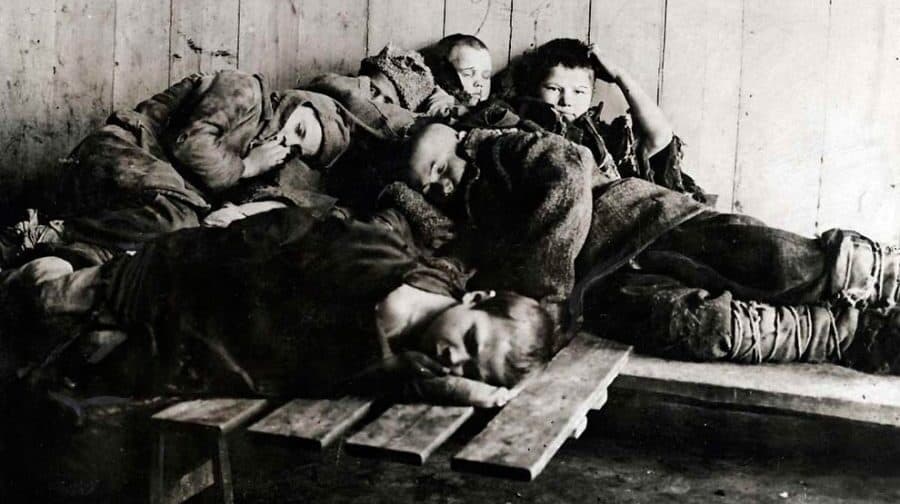 Poverty in Moscow in the 1930s

The name of Dr Alfred Salter is well known by Bermondsey folk, even if many today may be largely unaware of who he was, or what he and his wife Ada did for the area and its long-suffering people. Probably even less is known about his politics, beyond that he was a Member of Parliament for the Independent Labour Party (ILP), and a committed pacifist, writes Gary Cartwright…

The ILP was, after its foundation in 1893, led by Keir Hardie, who went on to found the Labour Party we know today. The ILP was affiliated to the Labour Party from 1906 to 1932, but it was always considerably farther to the left.

This leftist position – the ILP defined itself as “centrist-Marxist” – made the party interesting to the Soviet Union, which was busily engaged in seeking out fellow travellers in other countries. And so it was that Dr Salter found himself, in 1931, on a boat bound for Moscow as part of a delegation of doctors and scientists, to study healthcare in Stalin’s Soviet utopia, accompanied by, amongst others, Dr Somerville Hastings, Member of Parliament for Reading. Arriving in Moscow during an outbreak of plague, Doctors Salter and Hastings were immediately struck by the fact that in contrast to the presence of well-equipped hospitals, Russians appeared indifferent to the need for basic sanitary precautions. They reported a lack of any proper sewage system in many towns, with open trenches depositing effluent into streams and rivers from which water was drawn for drinking.

Whilst sailing on the Volga, during a delay in the city of Nizhny-Novgorod, Dr Salter wrote in his diary: “Immediately adjacent to the quay, one of these open sewers was discharging itself a few yards from the stern of the boat. I watched the water supply of the vessel being pumped from the river into the storage tanks.

“It was drawn from a spot not more than twelve or fifteen feet from where the black, foetid excrement-laden liquid was trickling in.

“Remember that for the next five days the only water we should be able to obtain for drinking and washing, for cleaning our teeth and so on, was the turbid yellowish fluid which came from the lavatory basin taps after settling in the tanks.

“We lifted the lid of one of these and examined the interior. There was a deposit of about 6 inches of black slime and mud on the bottom. No wonder that Russia is riddled with Typhoid and at times with Cholera!”

The two doctors were appalled by the living conditions of the Russian peasantry: he noted on the Volga journey that between 1000 – 1,500 were accommodated in the steamer’s hold along with the cargo. “I have never seen anything like it anywhere in the world.” he wrote. “Hundreds and hundreds of poor folk are huddled together in the semi-darkness, lying on top of their worldly belongings.

“Often the steerage quarters were so crowded that the people literally lay on top of and across one another. The stench of unwashed, perspiring bodies was suffocating, while the sanitary conditions…!”

Dr Salter noted that most Russians endured hardships and deprivation that exceeded what would be experienced even by the poorest folk of Bermondsey at that time.

He paid tribute to the ability of the Russians to make sacrifices for future benefit – this was the first of Stalin’s five year plans – and the Soviet Union was undergoing a period of rapid collectivisation and industrialisation. Whilst many advances were made, particularly in the area of education and technology, this first five year plan will be chiefly remembered for the liquidation of the Kulaks, the landowning farmers.

More than 720,000 people were executed, and millions more perished in the “Gulag”, the Soviet penal system, which even had special camps for the wives and children of the ‘enemies of the state’. Five to seven million more perished in the politically engineered famines, which Ukrainians to this day remember as ‘Holodomor’.

In a letter to the Manchester Guardian, another of Stalin’s guests, the Irish playwright George Bernard Shaw, described reports of famine as ‘slander’. But Dr Salter saw things very differently. Where Shaw saw a  “hopeful and enthusiastic working-class, self-respecting, free up to the limits imposed on them by nature and a terrible inheritance from tyranny and incompetence of their former rulers, developing public works, increasing health services, extending education, achieving the economics independence of woman and the security of the child…” Salter was to report appalling conditions.

He considered the Russian people as being wretchedly poor, immoral, promiscuous, deprived of the most basic necessities. He condemned “The absolute and ruthless suppression of all views contrary to those held by the government…” and saw no prospect to an end to the tyranny. He drew attention to the way in which critics of the state or its ruling elite could expect to be dealt with; “You literally disappear, and you are not heard of again”, he said.

It might be argued that the promiscuity that Salter described was a result of the moral relativism of Marxism-Leninism. Marx held that any moral system was simply a product of the dominant class, and that it would be the movement of history, or progress, that would settle moral questions, not a fixed, universal standard. The revolution therefore swept aside not only the bourgeoisie, the intelligentsia, and the Church, but everything that they believed in. Their moral values, indeed their entire belief system, had to be eliminated on point of principle. Marx held that the future could not be built until the past and present are destroyed.

Dr Salter was not alone in seeing through the lies and propaganda of his Soviet hosts. Gareth Jones, Foreign Affairs advisor to the Prime Minister visited Russia and Ukraine on three occasions between 1930 – 33, to report on the success or otherwise of Stalin’s five year plan. Alerting the world to the Ukrainian famine, as did Malcolm Muggeridge, then a young journalist himself.

Dr Salter himself was never an ideologue. He would never have compromised his ideals or his devotion to the people under his care, in the interests of politics. He was a visionary, and his legacy remains today in the parks, the playgrounds, the homes, in the schools, and in the tree-lined streets of Bermondsey.

The author is a former governor of Redriff School, and advisor to Members of the European Parliament.