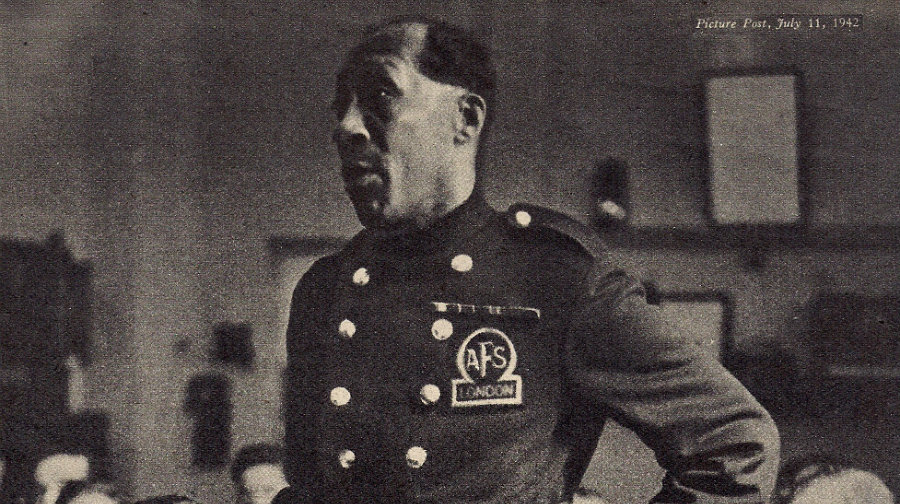 George in his fireman’s uniform

A young soldier who earned the nickname the ‘Coconut Bomber’ in the First World War went on to spend the next war fighting fires in Southwark.

Sergeant George Arthur Roberts is the first contender for this year’s Southwark Blue Plaque award for his contribution to the borough at a time of great change and turmoil.

George was born in 1890 on the Caribbean island of Trinidad and enrolled in the Trinidad Army as a youngster. In those peaceful days there was not much excitement to be had on the tropical island for a young man ready for battle. So when the war began, the enthusiastic young volunteer signed up to the European Service and worked his way to England, where he was placed in the Middlesex Regiment. After fourteen months of training, George was shipped off to France and the action he had craved back in Trinidad would soon be upon him.

A clipping from the Every Week magazine in 1918 says he did “splendid service” in the Dardanelles and served in many “severe engagements” in those torrid months as he was injured in both the battle of Loos and the Somme. He earned his nickname as the Coconut Bomber because he could throw bombs like he used to throw coconuts as a child – at least that is what was reported by the Every Week. “…he showed great proficiency as a Battalion Bomber, being able to throw his bomb a distance of 74 yards. This extraordinary throw was largely the result of his youthful experience in bringing down coconuts from the palms in his native island,” read the article.

He was taken back to visit Trinidad in 1921 and 1935 to help recruit others to the war effort. He is said to have given “vigorous speeches on behalf of his adopted country”, which were so rousing that 250 men signed up immediately.

After the First World War, George settled at 84 Meeting House Lane in Peckham. When he met his first wife, Margaret in 1920, they moved to 40 Bournemouth Road before settling in the Lewis Trust Dwellings in Warner Road, Camberwell and this remained George’s home until he died in January, 1970. Not a man to shy away from danger, as the Second World War began, George signed up to the National Fire Service.

A portrait of George by famous wartime painter Norman Hepple

In 1943 the former electrical engineer was made a section leader and in 1944 he was awarded a British Empire Medal for “general duties at New Cross Fire Station and for his part as a founder and pioneer of the Discussion and Education groups of the Fire Service throughout the Second World War.”

These voluntary talking shops were a part of a national move to try and prevent a repetition of a ‘sleepwalk’ to war and a fascist state through open debate. London firemen like George led the way as 15,000 men and women would go to meetings at their local station houses every week and hear speakers on any given topic from what to do with Germany after the war, to hobbies and books. “If what I am doing can assist in some small way to bring about a better understanding and a true fellowship amongst the peoples of the earth, I shall be extremely happy,” George said in a BBC interview for a programme called ‘Calling the West Indies’ recorded in 1947. In the same interview George was asked if he ever considered returning to his home to Trinidad. “As much as I hate the cold and fog of winter, fuel cuts, food rationing and the prospect of very difficult times further ahead, I feel I shall be happier here with my family. But I hope to see the West Indies again. “Memories of the grand reception I had on my two short visits in 1921 and again in 1935 linger on. Cheerio West Indies. I am always with you in spirit, and I hope to visit you soon,” he said.

George and Margaret had two sons. Cyril was born in 1921 and Victor the following year. Both boys joined up to serve in the Second World War and Cyril’s regiment was captured in France before Dunkirk. He remained a Prisoner of War in Germany’s Stalag 383 until 1944. Victor served with the Royal Artillery. Local historian, Stephen Bourne, who nominated George Roberts for the Southwark Blue Plaque, has spent years researching who he calls a “forgotten Camberwell hero.” “He was a Trinidadian from the old British Empire. Britain would have been his mother country. He came to serve in the First World War, which is commendable, but then remained here and had a family here,” said Stephen, who notes that George also represented the British Legion from the 1920s and was a founder member of the League of Coloured Peoples in 1931. “He continued with that sense of responsibility to the wider community.

In the Second World War he then becomes a fireman and serves Londoners in very dangerous circumstances,” said Stephen. “He’s always been a forgotten figure but he was connected to all these organisations and received the British Empire Medal so he was clearly recognised at the time but as time has passed he’s been forgotten.” George was indeed so noted for his work at the time that he was painted by famous portrait artist, Norman Hepple, which featured in a war time journal. Sadly the whereabouts of the original painting is now unknown but the vision of a brave man who tried to create a better world lives on.

To vote for the blue plaque you can email news@www.newsatden.co.uk, write to Southwark Blue Plaques, C/O Southwark Heritage Association, 216 Upland Road, East Dulwich, SE22 0DH, fill in a voting card at any Southwark library or vote online at www.surveymonkey.com/r/ZFYHYZ6