Isaac Gold was murdered by another passenger on board the 2pm train from London Bridge to Preston Park Station on June 27, 1881 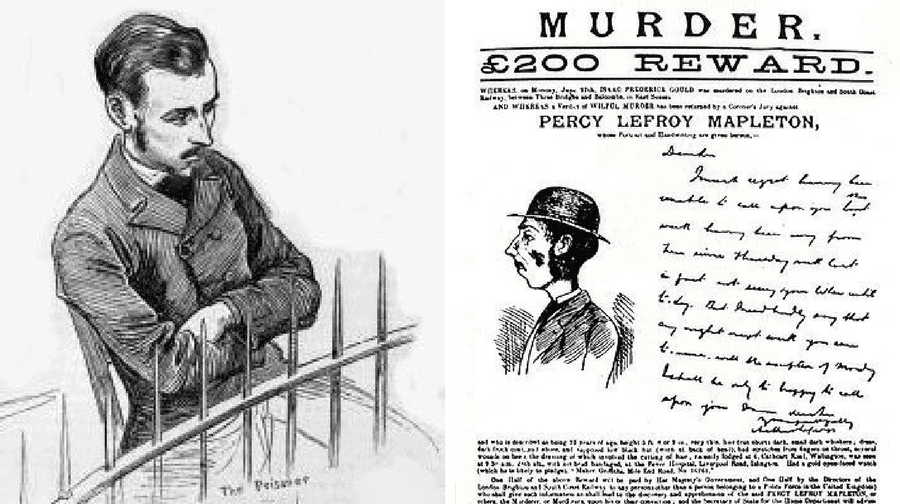 An article written by a former British Transport Police boss details the intriguing case of a murder on board a train from London Bridge in 1881.

William Owen Gay (1913-1990) wrote about the murder of Isaac Gold by another passenger on board the 2pm train from London Bridge to Preston Park Station on Monday, June 27, 1881.

The article written by Gay was published in the Railway Police Journal in January 1949.

He later went on to become the first BTP Chief Constable to be appointed from within the force in August 1963 – the second was Paul Crowther in 2014.

The Railway Police Journal was the in-house journal for the BTP at the time – later named the British Transport Police Journal – and ran from 1948 until 1990.

Gay’s article has been published on the BTP History Group’s website as part of BTP History Week.

It details the case of Isaac Gold who was murdered by fellow passenger Percy Lefroy Mapleton – a journalist desperately short of money who had boarded the train with the purpose of robbing someone.

“When the 2pm train from London Bridge arrived at Preston Park Station just outside Brighton on the afternoon of Monday, 27th June, 1881, a ticket collector saw a man step unsteadily on to the platform from a first class carriage,” Gay wrote.

“He was covered in blood, hatless, without a collar and tie, and very distressed.

“The collector went to his assistance and he told the collector that he had been attacked just before the train entered Merstham Tunnel.

“[…]The collector saw nobody else alight from the compartment but he observed that a piece of watch chain was hanging from one of the man’s boots.

“He pointed this out and the passenger remarked that he had put it there for safety.

“The condition of this strange and somewhat battered passenger, who gave his name as Percy Mapleton Lefroy, was such that the station master arranged for the platform inspector to take him to the police station at the town hall, while the collector was sent to advise the Railway Police.

“There-after the situation developed in such a way that the obtuseness of the railway officials and of the Borough and Railway Police became the subject of editorial comment in The Times while other newspapers said unkind things in less polite terms.”

Mapleton – or Lefroy, as he had given his name – was taken to hospital to have his injuries treated before being interviewed by several officers and making a statement at the police station.

He then went to Brighton Station to board a train to London but was taken into an office and searched, where he was found to have counterfeit coins in his possession.

“In the meantime the carriage was shunted into a siding and an examination made,” wrote Gay.

“Three bullet marks were found and there was blood everywhere – on the footboard, mat, and door handle, and also on a handkerchief and newspaper left in the compartment.

“There was, in fact, every sign of a fierce struggle. There were also some coins similar to those found on Lefroy.

“In spite of obvious inconsistencies in his story and of the highly suspicious circumstances, neither the Brighton Police, nor the Railway Police considered it necessary to detain Lefroy.

“But they were uneasy and although Lefroy was permitted to join a London train arrangements were made for him to be accompanied by a detective named George Holmes.”

“While Lefroy and Holmes were travelling back to London, a search of the line was organised.

“In Balcombe Tunnel railway staff found the body of an elderly man, later identified as a retired corn merchant named Gold, who lived in Brighton.

“Mr Gold had been shot and stabbed and near his body was found a knife smeared with blood.

“It was soon learned that he had been robbed of his watch and chain and a considerable sum of money.

“The news of the finding of the body was passed along the line and at Three Bridges the station master told Holmes what had happened. Holmes was also instructed by telegram from Brighton not to let Lefroy out of his sight.”

Lefroy talked Holmes into accompanying him to an address in Surrey so that he could change his clothes – but while the detective was distracted, he managed to escape.

He was later found hiding out at a house in Stepney, Tower Hamlets, where he had been lodging under a different name and only going out at night.

“Bloodstained clothing was found in his room and since he had already been identified as a man who had exchanged some counterfeit coins and also pawned a revolver, the evidence against him was overwhelming,” wrote Gay.

Percy Lefroy Mapleton later appeared in court where he was found guilty of Gold’s murder by a jury after just ten minutes’ deliberation. He was hanged on November 29, 1881.

Gay said it was a long time before the press and public forgot “the strange lapse of the officials concerned in the case”.

“The L.B.S.C. Rly. [London, Brighton and South Coast Railway] were subjected to a great deal of ridicule and no doubt many police officers were urged to greater care in future,” he wrote.

“But they had little cause to worry because it was sixteen years before the next murder on the railway.”

With special thanks to the British Transport Police History Group: www.btphg.org.uk/