Stephen Bourne tells the News about his latest book 'Under Fire: Black Britain in Wartime 1939-45' 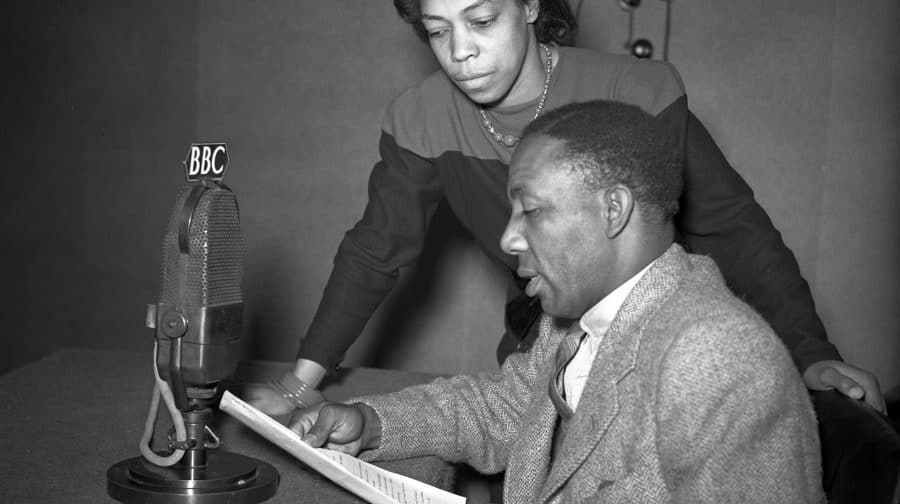 Una Marson and Learie Constantine in Calling the West Indies

Southwark historian Stephen Bourne has been writing black British history books for thirty years. His best-known is Black Poppies – Britain’s Black Community and the Great War (The History Press) for which he received the 2015 Southwark Arts Forum award for Literature.  Two years later London South Bank University awarded Stephen an Honorary Fellowship for his work on diversity. His latest book is Under Fire – Black Britain in Wartime 1939-45 in which he pays tribute to black ‘front-liners’ and servicemen and women from Britain, Africa and the Caribbean. Under Fire includes a number of Southwark citizens. We asked Stephen to tell us about some of them… I am often asked why I became interested in history and the reason is simple. I was influenced by the older women in my family.

When I was a teenager in the 1970s, I spent hours listening to my working-class grandmother and great-aunts talk about their lives. I was especially intrigued by their memories of life on the home front in London during the Second World War.

One of the older women in my family was Aunt Esther, a black Londoner who had been adopted into my family by my white great grandmother in 1941 during the London Blitz.

My interest in documenting the experiences of black citizens on the home front and in the armed services began with the stories Aunt Esther told me. While recording my aunt’s memories, I began searching for other stories of black people in wartime Britain, and I discovered many who have been ignored by historians in the numerous books and documentaries produced about Britain and the Second World War. I am often asked why I became interested in history and the reason is simple. I was influenced by the older women in my family.

Despite evidence of racism black people contributed to the war effort where they could. In Britain, they were under fire with the rest of the population in places. Many volunteered as civilian defence workers, such as firewatchers (including Aunt Esther), air-raid wardens, firemen, stretcher-bearers, first aid workers and mobile canteen personnel.

These were activities crucial to the home front. Factory workers, foresters and nurses were recruited from across the Empire in places like Africa and the Caribbean. For some it may seem strange that black people would take part in a war alongside white people who did not treat them with equality, but the need to win the war, and avoid a Nazi occupation, outweighed this. Sam King, a Jamaican who joined the Royal Air Force in 1944, said: “I don’t think the British Empire was perfect, but it was better than Nazi Germany.” After the war, Sam settled in Southwark and became Mayor of the borough in 1983. Several others who joined the League in the 1930s also gave outstanding service during the war and they include the Barbadian Dr Cecil Belfield Clarke. His surgery at 112 Newington Causeway remained open all through the intensive bombing of the Elephant and Castle, even though most of the neighbouring buildings were destroyed. Then there was the Camberwell resident George A. Roberts, a Trinidadian who had served in the First World War. He worked tirelessly and bravely all through the Second World War as a fireman.

He was also responsible for organising the Discussion and Education Groups of the wartime National Fire Service.

In 1941 his portrait was painted by the war artist Norman Hepple.

There was also Una Marson, a Jamaican feminist and writer, who lived in Brunswick Park in Camberwell, and joined the staff of the BBC in 1939. During the war she produced and presented a popular radio series called Calling the West Indies.

In 1941 Una invited Dr Belfield Clarke to make a broadcast in Calling the West Indies but he had to decline.

In a letter to Una he explained that all the buildings in Newington Causeway had gone except his surgery. One complete side of the building was missing. Rain was getting in. His gas and water supplies had been disconnected. In spite of this, Dr Belfield Clarke never closed his surgery. In fact, he remained there until he retired in 1965.

Under Fire also includes the wartime memories of Cerene Palmer and several other African and Caribbean residents of Southwark.

For them, life on the home front across the Empire was no different from that of the British Isles.

Cerene remembers VE Day as a big celebration: “Everybody in Jamaica wanted to know that Hitler was really dead. They wanted to make sure it was him. On VE Day we waved a branch of a tree and listened to calypsos. The whole island took part.”

Stephen Bourne’s Under Fire: Black Britain in Wartime 1939-45 has been published by The History Press (£12.99)