The original was lost in the 1990s 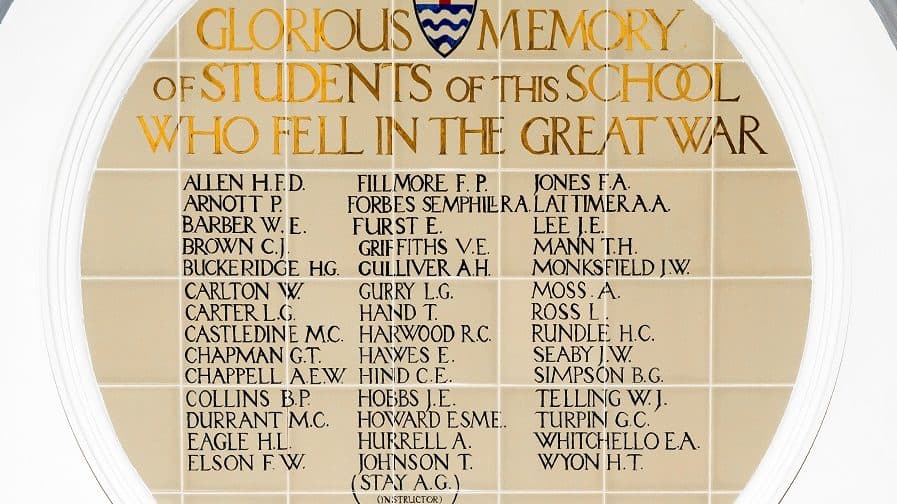 A lost World War One memorial commemorating fallen soldiers from Camberwell College of Art has been lovingly recreated and given pride of place by its artists after being lost during the 1990s.

Staff member and former student, Simon Burbidge, approached his colleagues at the art school to help reproduce the monument after being inspired by last year’s armistice centenary events.

The college, which is part of University of the Arts London, exhibited work by one of its war-time students; David Jones last year. Jones, an artist, illustrator and poet, was born in Brockley and first attended what was then known as ‘Camberwell Art School’ at the age of fourteen.

By nineteen, he had signed up, an experience that would influence much of his life and work – and lead to several breakdowns.

From his time as a private on the Western Front, Jones wrote his most famous work, the epic poem In Parenthesis, first published in 1937, winning praise literary greats like Eliot, Yates and Auden for its modernist take on the personal horror of war and his turn towards Roman Catholicism.

The exhibition got one of the college’s members of staff thinking about the college’s own memorial to the fallen, which he remembered from his own time as a student.

The memorial had been lost during campus changes in the 1990s but Simon, who now works as a printmaking technician at the college and was a BA painting student in 1985, remembered photographing the original while researching icons and iconography for a project.

“We approached several colleagues within Camberwell regarding the memorials’ reinstatement and Taslim Martin and Mike Hurley took on the task of reconstructing it,” he explained.

That black and white image was the only image left of the lost plaque – and their entire resource for reproducing it.

Taslim and Mike, who both work within the college’s world renowned ceramics department, began recreating the original using the same materials and processes from that time.

“We went through all the tiny design problems that the original makers must have gone through, look at “FORBES SEMPHILL RA” for example,” said Mike.

“The position of the F – how much agonising went into that, I wonder?”

As the photographed memorial had sustained some damage, with one name in particular only partly legible, the team also sifted through the college’s archives to find his identity – Tooting resident, CE.

The finished product has now been placed back in its original home on C-Block, one of the college’s original Victorian buildings.

It will stay as a permanent reminder to the college’s fallen for the next hundred years and beyond, but the stories of the men it names are still something of a mystery without further research into the archives.

It is hoped any relatives will be inspired to get in touch to share their stories – and visit the monument.

“I am obviously incredibly proud and humbled to be a part of the reinstatement,” said Simon.

“My father and uncle were in Burma during the Second World War, Dad eventually becoming president of the local British Legion.

“II grew up with an intimate understanding of the significance of remembrance.” Camberwell College of Art first opened on January 10, 1898, as Camberwell School of Art, next to the South London Art Gallery.

Until the Second World War, the school was mostly known for courses for apprentices in the building and printing trades.

In the postwar years, the college began to focus more on Fine Art, becoming ‘Camberwell College of Arts and Crafts’ in 1973 when it expanded into a modern purpose-built block on the same premises.

In 1989 it was renamed Camberwell College of Arts, with its most recent change the £62 million redevelopment held two years ago, in 2017, which included establishing a new gallery, Camberwell Space, on Peckham Road.

Are you related to any of Camberwell College of Arts’ First World War fallen heroes? The college, and Southwark News, would love to hear from you. email editor@southwarknews.co.uk or call 020 7231 5258.