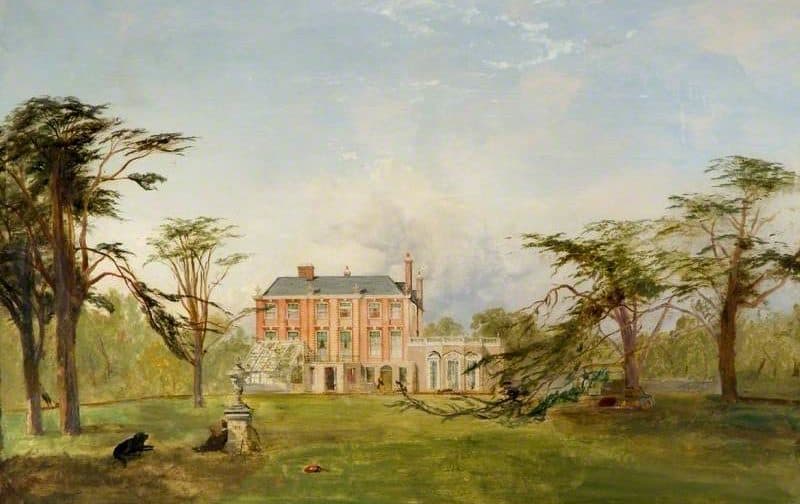 An image believed to be of the original Camberwell Lodge (c) Kelmarsh Hall; Supplied by The Public Catalogue Foundation

Champion Hill takes its name from the eighteenth century’s Sir Claude Champion de Crespigny who owned an estate near to today’s Champion Hill in Camberwell. The first Claude Champion de Crespigny, (1620-1697) settled in England after the religious wars in France which saw the majority of its protestant population flee.

His lineage was Norman, with ancestors fighting in the First Crusades for St Louis and later becoming ‘hereditary champions’ of the Dukes of Normandy and Brittany.

De Crespigny left his ancestral home, Chateau de Vierville, after the revocation of the Edict of Nantes in 1687, as they came under pressure to either convert or leave.

He made London his home and served in the British Army as a Colonel.  It was his son, Thomas, who built their Camberwell seat, Champion Lodge, roughly at the corner of Love Walk and Denmark Hill.  The estate had 30 acres of parkland.

Thomas’ grandson, Claude, born in 1704, was the first to become a baronet and gain the title of ‘Sir’.   Over the next generations, the family moved in high circles – with the Prince Regent reportedly visiting Champion Lodge in 1804.

The fourth baronet – another Claude – was a militarist, adventurer, sportsman and all-round eccentric and the most famous Champion de Crespigny.

Born in 1847, Claude started in the navy as a midshipman before transferring to army and the King’s Royal Rifle Corps.

An adrenaline seeker and keen steeple chaser, he only retired from racing at the age of 67.  He is believed to have even once bribed a hangman to allow him to serve as an assistant executioner for a triple hanging.

Twelve years after inheriting his title he was declared bankrupt, but continued living an eventful life.  In 1882 he took up the dangerous pursuit ballooning, and a year later had become the first man to cross the North Sea in a hot air balloon, gaining worldwide fame.

A first attempt had ended with the baronet breaking his leg and ribs during take- off when the basket collided with a wall.

Claude named all five of his sons Claude.  The eldest was born in 1873 and, like his father, he entered the military – joining the 2nd Life Guards in 1885 after leaving Eton.

Captain Claude served in the Boer War in South Africa and was twice recommended for the Victoria Cross for his bravery.

Although ultimately missing out on this commendation he did gain a Companion of the Distinguished Service Order (DSO) for his service.  He later served the Governor-General of India as his Aide-de-Camp.

Continuing family tradition he was a successful sportsman, particularly in polo.  In 1910 he was chosen to play for the Hurlingham Club team that competed in America. But on May 18 that year, at just 37 years-of-age, he committed suicide.

A coroner ruled that he killed himself while ‘temporarily insane’ suffering a bout of flu and sporting head injuries. Gossip at the time linked his death to an alleged affair with a married woman.

Son and father were both buried together in their family crypt.  By then, the Champion De Crespigny family had relocated to Essex, where a new Champion Lodge had been built after their original Camberwell seat was demolished in 1841. They also had a Suffolk mansion – Crespigny House.

After the eccentric fourth Sir Champion de Crespigny’s death, the title went to his younger son, Claude Raoul, a Brigadier General, who became the 5th Baronet.  He died in 1941.

Claude Raoul inherited many family traits. A newspaper article from 1918 described how during World War One “with one mighty swing of his stick he broke the neck of a Hun, and the regiment went on.

“The Hun’s gas mask and steel helmet are in England now hanging on the Walls of Brigadier General de Crespigny’s Essex home among innumerable trophies of the chase, grim relics of man whose hobby is fighting.”   He was reportedly a dab hand at boxing, shooting, cricket and horse riding, too.

In all there were eight baronets before the line became extinct in 1952, with the death of last baronet died.

Although the family and their home have disappeared from in Camberwell, boundary stones placed in 1806 to mark the end of their Camberwell estate and that of Dulwich College do survive to this day.  As does their name, in Champion Hill.