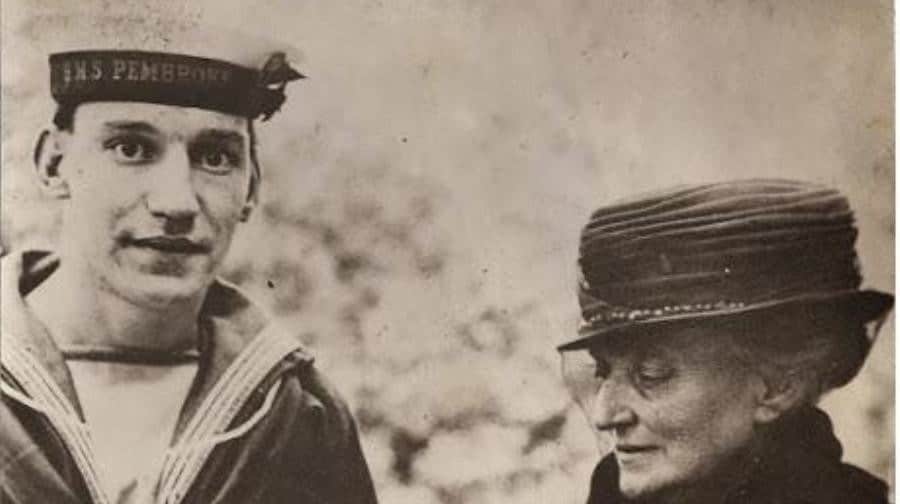 Supporters of a memorial statue to a VC medal winner from Southwark are going to put their irons in the fire this weekend to help create the life-size effigy of Naval war hero, Albert Edward McKenzie.

Chairman of the Albert McKenzie Memorial Fund, Paul Keefe, has invited everyone who has been involved in fundraising for the statue to go down to Kevin Boyes’ blacksmith’s forge at Surrey Docks Farm and create a piece of the statue themselves, which will stand proudly in Tooley Street when it is completed.

Fundraising is still ongoing, as costs have spiralled since the design was completed a few years ago from £40,000 to £125,000. But Paul is hoping the day down at the forge with Lady West, wife of Admiral Lord West, will reinvigorate the troops, who have raised more than £100,000 since 2010.

When the statue goes up it will stand at the epicentre of Albert McKenzie’s life in Southwark – between where he was born in Alice Street, where his parents lived in Shorncliffe Road, where he went to school in Webb Street and where he socialised in Decima Street.

In 1913 young Albert joined the Royal Navy as a boy entrant at eleven years of age. He joined the training ship Arethusa, which typically took boys from poorer parts of London. Discipline was notoriously harsh on board but the boys were taught everything they needed to know for a career in the Navy. McKenzie became a young boxing star on board, which stood him in good stead for the hand-to-hand combat he would later have to engage in on the front line.

The month before the start of World War One, Albert enrolled in the Boys Service of the Royal Navy at the age of fifteen.  Four years later, his act of astounding courage would help keep a British military disaster from total defeat.

In 1918 McKenzie put himself forward for the Naval force being formed to attack the Belgium port of Zeebrugge in a daring plot to take the major North Sea submarine base from the Germans. The plan was to block the heavily defended canal by filling three British ships with concrete and sinking them across the entrance.

At the same time a raiding party of Naval officers and Royal Marines was to land on the harbour wall, known as ‘TheMole’, and destroy the heavy guns guarding the harbour

To prevent the Germans reinforcing their troops during the attack, the viaduct which connected the Mole to the mainland was also to be destroyed by a submarine filled with explosives to be blown up underneath.

On the evening of April 22, 1918, a fleet of 76 vessels carrying 1700 men crossed the Channel, HMS Vindictive, captained by Capt Alfred Carpenter leading the way.

The following day, as battle commenced, Carpenter sailed HMS Vindictive up to the Mole, with McKenzie on board as one of the troops ready to storm the harbour wall. But according to McKenzie’s own account of the event, some over-zealous officers began firing too soon , inviting a wave of shelling from the Germans.

In a letter to his brother he wrote, ‘Well we got within fifteen minutes run of the Mole when some marines got excited and fired their rifles. Up went four big star shells and they spotted us. That caused it. They hit us with the first two shells and killed seven marines. They were still hitting us when we got alongside.’

Casualties were heavy before Mckenzie and his comrades had even stepped foot on land and the ship had overshot slightly, leaving the outnumbered and outgunned British troops the wrong side of three barbed wire fences. Despite the odds, McKenzie followed his officer onto the Mole with a Lewis gun and 400 rounds of ammunition.

As the British troops fell in droves, the order came through to withdraw, but by then McKenzie had had his rifle shot out of his hand by the enemy, leaving only a pistol, a bayonet and his bare boxing hands.

In the same letter to his brother, McKenzie later wrote: ‘My Lewis gun was shot spinning out of my hands and all I had left was the stock and pistol grip which I kindly took a bloke’s photo with it, who looked too business-like for me, with a rifle and bayonet. It half stunned him and gave me time to get my pistol out and finish him off. Then I found a rifle and bayonet and joined up our crowd who had just come off the destroyer. All I remember was pushing kicking and kneeing every German who got in the way. When I was finished I couldn’t climb the ladder so a mate of mine lifted me up and carried me up the ladder and then I crawled on my hands and knees inboard.’

The mission was immediately sold as a huge success back home to a country desperate for good news from the Front. But as the smoke has cleared over the years it has been seen in a very different light. It is said the brave officers and soldiers who took part knew they were on a ‘suicide mission’ as they sailed into the heavily fortified German stronghold. The ships we sunk to block the port left room for the German subs to manoeuvre round them and a foot bridge remained over the damaged viaduct, allowing supplies and reinforcements to come over land as well, meaning the key objectives of the mission were not achieved.

But the bravery of men like McKenzie was a source of great pride to the whole nation and he got a hero’s welcome when he came back to Bermondsey.

Albert Edward McKenzie gets a hero’s welcome on his return to Southwark after fighting with his bare hands to escape enemy lines in Belgium, 1918.

His doorstep was ablaze with coloured flags and bunting as was welcomed home by the Mayor of Southwark, who said McKenzie was not only the first London sailor to receive the Victoria Cross (for “most conspicuous gallantry”) but also the first to be awarded it by the votes of his comrades.

The mayor then thrilled the crowd by holding up Albert’s blood-stained uniform and smashed wrist watch.

McKenzie was still recovering from his war wounds at Chatham Naval Hospital when he caught the flu, in one of the worst epidemics this country has ever seen. He developed pneumonia and died on November 3, 1918 just ten days after his 20th birthday.

At his funeral service, a message from their majesties, the King and Queen, was read out. It said: ‘In the special circumstances of A.B. Albert E McKenzie’s lamentable death and the fact of his being a V.C , and the first London sailor to receive that most honourable reward, you are authorised to express at the public funeral the sympathy of their Majesties with the widowed mother and family. Their Majesties were grieved to hear of his untimely death and to think that he had been soared so short a time to wear the proud decoration which he so nobly won.’

If you would like to contribute to the fund to create a permanent memorial to Able Seaman Albert E McKenzie in Southwark, you can donate at www.albertmckenzie.com

McKenzie receiving his medal from the King

Albert was my grandfather’s second cousin.