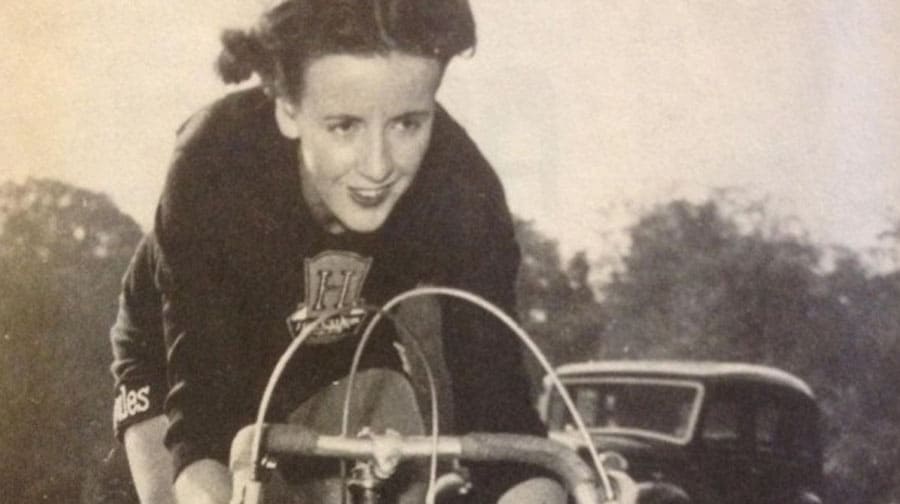 Eileen Gray racing on her bike

Victoria Pendleton is a household name these days, but women-on-wheels compete at the same level as their male counterparts now because of the the spirited determination of a Bermondsey-born cyclist.

Eileen Gray – a “timid and very mousey” girl, who grew up in Dulwich, would go on to found the Women’s Cycle Racing Association and help get women’s bicycle racing recognised as an Olympic sport.

Born on April 25 1920, Eileen lived nearby to the Herne Hill velodrome but cycling didn’t come onto her radar until she started working in a factory during the Second World War. As her mum was ill and in the Maudsley at the time, Eileen wasn’t called up but was instead put to work checking engine parts on the Harrow Road. When the buses and trains went on strike she was late for work and got a telling off from her boss. “I thought ‘right, you’re not getting me again’,” Eileen recalled in an interview with British Cycling in 2010. She got hold of an old bike and rode it all the way from Dulwich to Harrow Road every day. “….round the rubble and the potholes, through all weathers, night and day, but I was never late again, and he never had another opportunity to tell me off,” she said.

That old bike and that journey to work turned out to be a life-changing experience for young Eileen, who felt her character transformed by the freedom of the open road. “I was really shy as a young girl – timid and very mousey. And I would probably have stayed that way had it not been for this old bike that I was given during the war,” she said. “I can’t remember where it came from but I do know that it was the one thing that changed me from that shy young woman into the confident person that I became.”

In the days when there was no money for leisure activities and everyone made their own fun, Eileen became a keen cyclist and ended up joining the Apollo Cycling Club near where she lived and became an accomplished cyclist. “None of the other clubs allowed women to ride. But the Apollo was great and very welcoming. I made so many friends……I had to be pushed home from my first club run because I was so tired, but I kept going back for more,” she said.

In post-war Europe, sport was used as a way of bringing battling nations back together and cycle racing was hugely popular. In 1946, a track cycle event was held in Copenhagen, Denmark, where unusually the event organisers decided to run a women’s race as a ‘sideshow’. Three women from the UK were invited to compete, including Eileen, in what was the first ever British women’s international team. “It was a great opportunity for us,” said Eileen. “People today would laugh at even the suggestion that permission had to be given by half of society to the other half to do something that they did as part of everyday life, but that’s the way it was back then.

“Men ruled women and women had to wait to be invited, never mind they’d kept the whole country and the war effort going on their own for six years, as well as looking after their kids and doing women stuff – and all for only two thirds of the pay. But this was our chance – an invitation to show what we could do!” It turned out that the Danish team were members of a theatrical troupe who rode bikes as part of their act – which tells you how seriously the establishment took women’s sport at that time. Eileen’s team romped home to an impressive victory but, unlike the men’s event, there were no medals or titles awarded.

Eileen (left) competing in Copenhagen in 1946

“Oh no, they just wanted us there as a side show but what they didn’t realise was that they’d given us a platform, visibility, and a chance to show what we could do. And other women saw us too and must have thought ‘if they can do it, so can I’ and from that point on, something started that they couldn’t stop,” said Eileen. The following year Eileen gave birth to her son but stayed heavily involved in cycling administration and founded the Women’s Track Racing Association (WTRA) in 1949, which became the Women’s Cycle Racing Association in 1956. Eileen achieved a breakthrough in 1955 when the Union Cycliste Internationale, the sport’s international governing body, agreed to recognise women’s world records. Soon after it was at Herne Hill velodrome where Daisy Franks set the first ever world record for women by establishing a 550-metre flying start. These achievements brought an invitation from France for a British team to enter a three-day stage race at Roanne. As team manager, Eileen led her riders to victory – “…which I don’t think had been in the French plan,” she recalled wryly. The publicity around their win led to the same promoter putting on another event which he called “Le Tour de France Feminine” – which the British won too.

In 1958 the first World Championships cycling event specifically for women was staged in France, but the progress Eileen was making was resented by some of their male counterparts. Instead of cheering them on patriotically, one had women banned from a track and another had stole their equipment while they were at an international competition. “He just did it to harm our chances. And it makes my blood boil to this day to hear him lauded for his contribution to UK cycling when he did that to us,” said Eileen. From 1976 to 1986 Eileen Gray served as president of the British Cycling Federation (now British Cycling) and was invovled in cycle racing gaining Olympic status in 1984.She served as vice-chairman of the British Olympic Committee and was instrumental in the foundation of the London Youth Games in 1977.

She was the mayor of Kingston upon Thames in the 90s and for more than 50 years she was a member of the Honourable Fraternity of Ancient Masons, one of two orders of women Freemasons in Britain, of which she became the Past Most Worshipful the Grand Master. She was given an MBE in 1978 and a CBE in 1997. Eileen Gray was predeceased by her husband Wally Gray and was survived by her son when she passed away on May 20 at the grand old age of 95.