Does VC hero ‘Basher Bates’ get your vote? 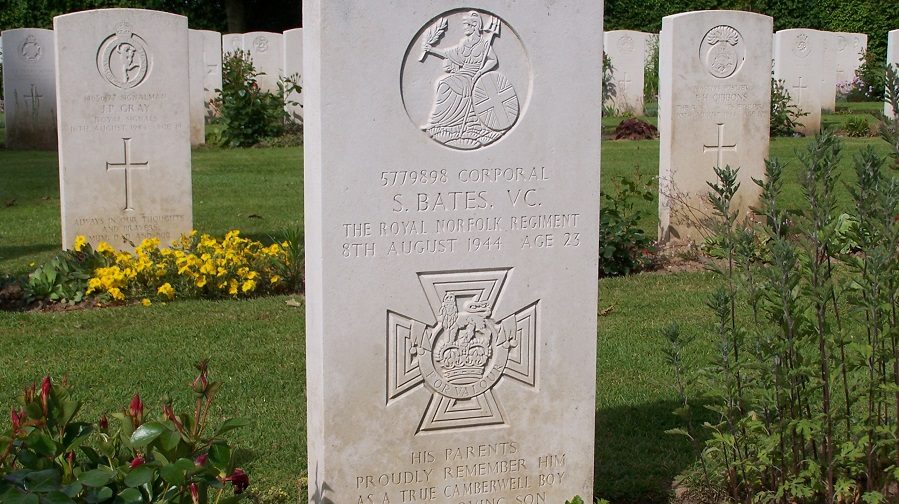 A decorated Second World War corporal and ‘true Camberwell boy’ could be the next recipient of a Southwark blue plaque.

Corporal Sidney Bates was posthumously awarded the Victoria Cross, the UK’s highest military honour, for exceptional bravery in France saving his men from an enemy defeat.

Bates was stationed in Normandy, with the Royal Norfolk Regiment, who were holding part of the Perrier Ridge, near Burcy, from the Germans.

The ridge was of strategic importance, as it overlooked the enemy’s supply lines.

On August 6, 1944, Bates was commanding the right forward section when it came under attack by around 60 SS Panzer fighters.

As the enemy drew closer and began to pick off his men, Bates’ close friend called Tojo, who was carrying a machine gun, was fatally shot.

The Corporal’s 57-year-old nephew, Chris Bates, explains what happened next: “Sid picked up the gun and advanced amongst the enemy firing continuously from his hip trying to halt their advance over his men and mates.

“He was hit by machine gun fire a few times but regained himself only to keep advancing and laying fire down on the enemy.

“Mortars fell around him to try to stop his advance. He fell to the ground but continued to fire while the enemy retreated.

“He survived for two days in the forward medical hospital.

“One stretcher bearer, Ernie Seaman, who brought Sid in from the battlefield, said he had bullet wounds in his legs and stomach, and shrapnel wounds from the mortars through his throat.

“Whilst laying in the field, Sid had wrapped himself around his machine and continued to fire at the enemy.”

When he died, the corporal had only been in France for two months.

The allied forces retained their strategic position on the ridge and further losses were averted after the battle.

It was one small victory, amongst many, that helped the allies ultimately win the war and achieve peace in Europe. Bates was born on June 14, 1921, in Camberwell to Frederick ‘Fred’ Bates and his wife Gladys at their home in Crown Street. He was brother to Frederick, Alfred, Albert, Gladys and Patricia.

“Sidney was a quiet unassuming lad but a happy prankster, and because of his quiet nature he usually got away with it,” says Chris, who has fond memories of visiting his grandparents in Camberwell’s Crawford House and hearing about his heroic uncle.

The Bates’ family was well known, having roots in Camberwell as far back as the 1700s, and also through his father’s living as the local rag-and-bone-man, who kept his horse and cart at stables off Wyndham Road.

Bates, a carpenters’ labourer, nicknamed ‘Basher Bates’ due to his prowess in the ring, joined up in the summer of 1940, telling his mother: “Don’t think I’m brave. I’m scared.”

After having his last drink in The Sultan public house with his family, he headed to the coast to join the Normandy landings at D-Day. Two months later he would be dead.

Bates was one of 181 servicemen awarded the Victoria Cross during World War Two, collected by his grieving parents at Buckingham Palace. Mr and Mrs Bates at Buckingham Palace, with their son’s Victoria Cross

But his death was not the only wartime loss they suffered.

Later, their home on Councillor Street was destroyed in the Blitz, and a concerned Winston Churchill wrote to the authorities to ask if he could provide financial assistance to the hero’s family.

Since then, Bates’ actions have been commemorated with a bench in Camberwell, a Commonwealth War Graves Commission headstone and monument in France, and featured in in countless documentaries and histories of the Second World War.

Bates’ sister, Pat, is his only still-living sibling, but Chris is one of many relatives, some still in Camberwell, keeping his legacy alive, and hope a blue plaque will be next.

As a stonemason by trade, Chris says he was honoured to lay the stones at Bates’ memorials at home and abroad.

He is commemorated near the Normandy battlefield, alongside more than 4,000 other fallen allied soldiers.

“Sid’s VC was awarded not only in his honour but in honour of all who served and suffered during the world wars,” says Chris. “Even though he was from very humble background his actions changed the course of many lives and saved many lives.

“It is so important that we continue to remember what sacrifice these young lads made to give us a better world to live in.”

As the epitaph on Corporal Sidney Bates VC’s headstone reads: ‘His parents proudly remember him as a true Camberwell boy and a loving son.’

Votes can be cast by emailing news@southwarknews.co.uk, admin@southwark.org.uk or on voting slips available at council-run libraries. Voting closes on Thursday February 28 – 5pm.

Family would love to have a blue plaque put up in sids honour ! True hero ?