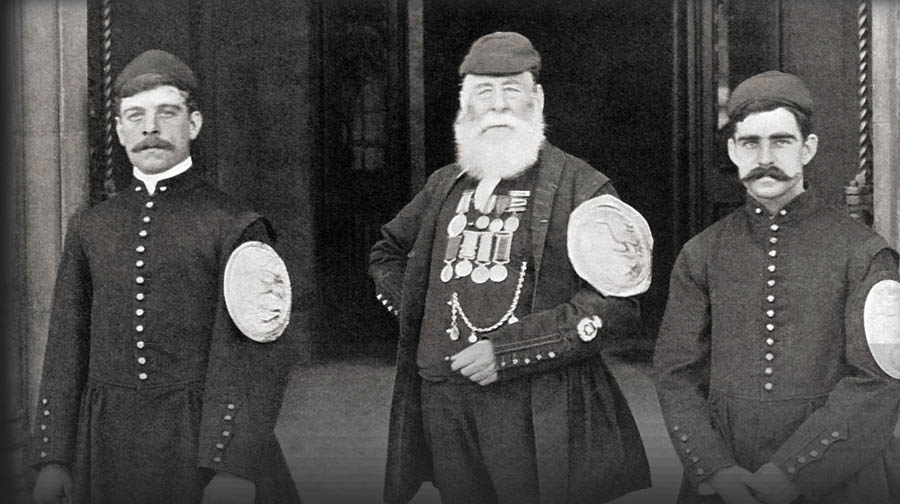 The Doggett’s Coat and Badge Wager is the oldest rowing race in the world.

The Coat and Badge is the prize for the race where up to six apprentice watermen compete for this prestigious honour.

The contest from London Bridge to Chelsea, between two riverside pubs both named The Swan, has been held every year since 1715 (except during wartime, although the missing races were contested after peace broke out) and is a favourite annual spectacle for Londoners.

Thomas Doggett was an actor from Dublin who moved to London in 1690 to further his career.

He was associated with the Drury Lane Theatre as a co-manager and played mainly comedy roles up to 1713 when he retired, supposedly with a fortune.

The actor relied heavily upon the watermen of the Thames, who were then the equivalent of the modern taxi driver, to convey him between his workplaces and his home in Chelsea.

There is a legend that Doggett was rescued by a waterman after falling overboard whilst crossing the Thames near Embankment.

Although this has always been dismissed, along with other myths, the story continues that in gratitude for his rescue, he offered a rowing wager to the fastest of six young apprentice watermen in their first year of freedom.

What is fact is that, to celebrate the accession of the House of Hanover (George I – formerly Duke of Brunswick) to the throne of England in 1715, Doggett founded the Brunswick Coat and Badge Wager.

The first race took place on accession day, 1st August 1715, and the first winner was John Opey, a waterman from St.Saviour’s Dock, Bermondsey. Winning the Coat and Badge in the 18th and 19th centuries would help attract more trade to the talented waterman.

Doggett deemed that the coat in the esteemed prize had to be orange in colour, as this was the colour of Protestant Europe, the colour of the Hanovers and the colour of the Whig political party that he was a member of; the silver badge displays the winner’s name, the horse of the House of Hanover and the word ‘Liberty’.

There was this report in the Daily Courant on August 1st, 1716: ‘This being the day of His Majesty’s happy accession to the throne, there will be given by Mr. Doggett an orange colour livery, with a badge representing Liberty, to be rowed for by six watermen, that were out of their time within the year past.

They are to row from London Bridge to Chelsea, and will be continued annually upon the same day for ever.’

The colour of the prized coat changed to red in the early 1900s to match the colour of Royal Watermen on official duty.

The race, today known as the Doggett’s Coat and Badge Wager, was managed by the erstwhile actor up to his death in 1721.

Alas, according to a plaque on his Eltham grave, he died a pauper, having lost his money in the South Sea Company.

On Doggett’s death a small sum was left to a Mr Burt of the Admiralty Office with instructions to manage the race. Mr Burt felt unwilling to accept this task and the trusteeship of the race was passed to the Fishmongers’ Company who since 1722 have organised the race in accordance with Doggett’s instructions.

Originally it was raced against the tide in the boats used by watermen to ferry passengers across the Thames. Today it is raced at a date and time in late July that coincides with the incoming tide in contemporary single sculling boats.

In the modern race, each competitor to complete the course receives a miniature of a Doggett’s Badge for their lapel in a ceremony at Watermen’s Hall, in silver for the winner and in bronze for the others.

Monetary prizes are also made by the Fishmongers’ Company to the rowing clubs of those taking part, with £250 to the winner’s club, £150 for second, £100 for third and £50 for fourth.

In addition to the prizes received, winning the Doggett’s Coat and Badge is a respected achievement.

The 2017 race was won by more than ten lengths by Jack Keech, the 6th winner in his family and the 303rd winner of Doggett’s Coat & Badge Wager.

He now hopes to row for England in the next Olympics.

Thanks to the Fishmongers’ Company, Watermen’s Hall, Ben Mann and Rob Cottrell for their help.

The Doggett’s Coat and Badge Wager