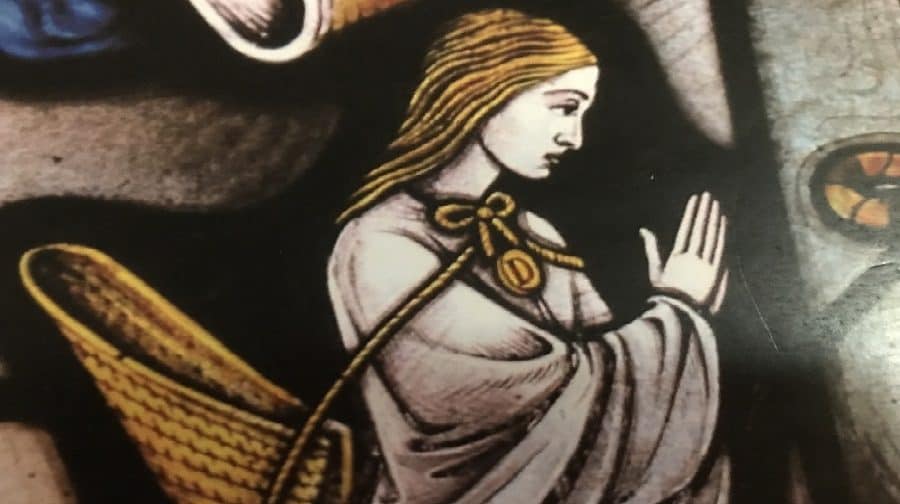 An image of Little Dorrit in the stained glass window

A new history of Borough’s St George The Martyr church reveals the stories of botched executions, England’s oldest man, a would-be terrorist Anglican priest, and a congregation noted for its drunken weddings. Matthew Bayly and his history book

Historian Matthew Bayly says he originally planned to write an architectural history of the impressive building, “but the stories I encountered blossomed.”

According to his research, the earliest reference to a church on the Borough High Street site goes back as far as 1122. Throughout most of history, the only way into the city was over London Bridge and past the church.

Famous visitors who stopped for prayer include King Henry V, given a heroes welcome at the church on his way back from Agincourt, the 1415 battle which saw an end to the Hundred Years War between England and France, and Charles II, who stopped on his return to restore the monarchy after Thomas Cromwell’s short-lived republic.

Buried in its grounds are Edmund Bonner, said to haunt St George’s, the sixteenth century Roman Catholic Bishop of London who refused to support the reformation, and the ‘oldest man in England’, Richard Griffin. Supposedly born in 1620, Griffin died in 1736 at 116 years old. According to his grave stone, his coffin was accompanied by ‘1116 ancient people’ – with the oldest pallbearer 95 years of age.

At one time, the churchyard was home to medieval stocks and a whipping post, and in the 1600s, today’s Borough tube station was an executioning ground. In 1610, a Michael Banks was sentenced to be hanged but somehow survived the ordeal. He was taken to St. George’s to recover for three hours before being taken out and hung again – successfully.

The church has also been the location of a little-known gunpowder plot, masterminded by an ordained – but not practising – Anglican priest. In 1902, George Martin, from Newcomen Street planned to blow up the church’s steps, where a stand was erected for paying guests to watch King Edward VII’s Royal Procession through London.

Martin said he was protesting at the money-making scheme on consecrated ground and the cosy relationship between the church and the upper classes, but it is unclear whether he was truly politically motivated – or very mentally ill. Both world wars left their mark on the church. In May 1919, only seventeen of ‘Southwark’s own’, one thousand-strong regiment returned from the trenches, and the church took a direct hit during the 1945 blitz. It was during the church’s renovation that a new stained glass window was installed, celebrating the church’s most famous parishioner – Charles Dickens.

Dickens, whose father was incarcerated in Marshalsea for his debts, grew up in poverty in Lant Street and his experiences in Borough became immortalised as ‘Dickensian London’.

In his novel Little Dorrit, the eponymous character – also a child of Marshalsea – is christened in St George’s and later finds refuge sleeping inside when she has nowhere else to go, before eventually marrying at its altar. Today, a figure of Little Dorrit can be seen kneeling in prayer in the stained glass window.

But although the parish was well-known for its poverty, it wasn’t all misery.  A description of church life from 1930s describes “the extreme poverty, the Sunday school numbered in hundreds, the mass weddings (the church usually filled with an inebriated congregation),” where couples lined up and were married in unison.

Mr Bayly believes the fact St George’s is open to the public every day, celebrates its heritage, and still has such a mixed congregation of people ‘born and bred’ in the parish and newcomers, makes the church special to this day: “Over 900 years St. Georges has been a local landmark where people have marked the passage of their lives,” he says. “For all the poverty in the parish’s history, normal life carried on. Whatever St George’s is, it is not just stone and dates.”

This looks great! How can I purchase the book online pls?