It was an early home for Melodrama, a genre which paved the way for silent movies, and one of London's first black theatre stars 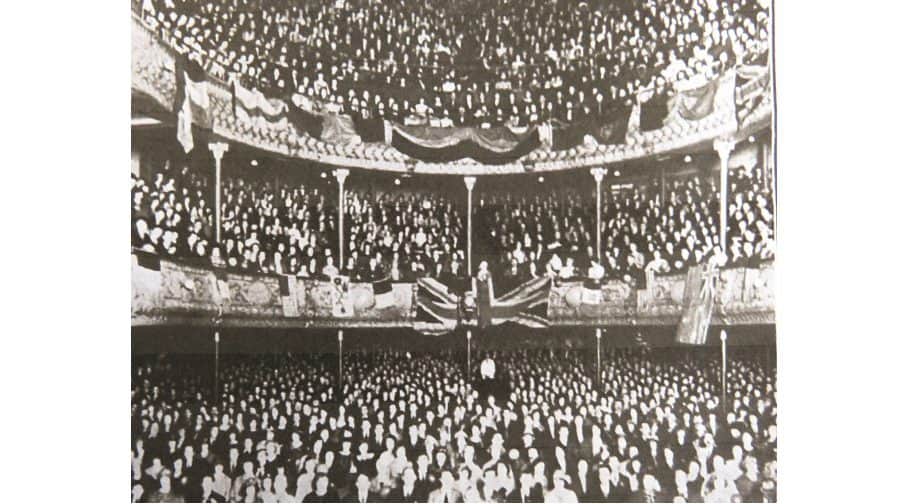 Two theatre lovers have set about chronicling the 145-year history of the Coronet in Elephant and Castle.

Before the much-loved venue closes its doors for the last time at the beginning of 2018, Constantine Gras and John Whelan will put on a huge celebration of theatre and art to tell its story.

The pair say the most intriguing phase of its life was a five-year period from when it opened in 1872 as the Elephant and Castle Theatre, at the behest of “playful and entrepreneurial” businessman Edward Smith.

A key figure in those young years was Irish-born actress Marie Henderson, who pioneered the eponymous genre of Melodrama.

A caricature of the Elephant and Castle Theatre owner Edward Smith

“Before arriving in Elephant and Castle, she established herself as a leading player at an old theatre called The Britannia,” Constantine said. “There was a rise in opportunities for women to get involved in theatre in the Victorian period.”

Marie made a name for herself by running Melodrama productions with her husband all through the year, with a big pantomime at Christmas.

Melodrama had made its way to the UK from France and Germany, and was known for including “stock characters” that were good and evil, often placing fun above nuance.

“But there was great variety within that,” Constantine said, adding that Shakespeare became a popular choice for melodramatic adaptions.

The theatre and the genre also played a vital part in the story of bringing black actors to the fore.

Morgan Smith was one of the first black men to be given a more serious, non-comedic role when he starred as Othello, in a cast that also included Marie.

John said Victorian-era Elephant and Castle became known as the “Piccadilly of the south”, helped by its position as a transport hub with a plentiful supply of busses and coaches, and its own railway station.

The Elephant’s theatre scene began to function as a place for bigger producers and casting directors to scout for new talent and new production companies before taking them to the next level.

In true melodramatic fashion, the Elephant and Castle Theatre burnt down in a terrible fire in 1878.

The cause of the fire was unknown, but such fires were not uncommon in the days when “gaslights were what everyone used in wooden buildings” John said.

Marie had been diagnosed with syphilis around the same time as the fire.

It is believed that the mind-altering effects of the disease, mixed with the distress of losing her theatre, contributed to her going mad. As well as losing her home, her theatre was where Marie kept all of her treasured costumes.

Towards the end of her life, and as her madness intensified, it was said that she could only speak three words: “jolly”, “yes” and “oh dear”.

She was put in the old Bedlam Hospital, and died in 1878.

John said the genre fell out of favour with the public as the Victorian era drew to a close, as more sophisticated audiences began to look upon it as low-brow.

But the pair say the venue remained a home to melodrama in its ever-changing forms, and played host to a renaissance of the genre in the 1920s.

John and Constantine look to Charlie Chaplain and the rise of silent films as another stage in the evolutionary path of Melodrama.

The venue re-emerged as an ABC Cinema between 1932 and the early 1980s, when it carried on as an independently-run cinema until 1999.

Also in keeping with the theme, the last film ever to be shown at the cinema was Stanley Kubrick’s ‘Eyes Wide Shut’.

Since then of course, The Coronet (as it became known) has been a venue for gigs and club nights, but as part of the Elephant and Castle Shopping Centre regeneration, it is due to close at the beginning of 2018.

Capturing the last breaths of the Coronet

On November 8, John and his colleagues from the People’s Company will host an evening of animated theatre at the Coronet, to tell the story of its relationship Melodrama. “We hope to capture the last breaths of the Coronet using its history,” John said.

The pair are also appealing for News readers to get in touch and contribute their memories of nights out at the Coronet – anyone who went on dates or hung out there with friends, or if they have old merchandise, ticket stubs, or anything that recalls some memory of the venue’s long history.

A two-week exhibition of their findings will also be held at the Artworks in Walworth Road.

Anyone who wants to assist John and Constantine with their research can email whelanjohnwalworth@gmail.com.

Thank you Southwark News for featuring our Arts Council England funded project, The Melodramatic Elephant in the Haunted Castle. One correction to the article is that the actress, Marie Henderson, who ran the Elephant and Castle theatre with her husband from 1875-1880, died in 1882.

Apart from its use as a theatre and cinema, we are also interested in hearing about people’s experiences of the Coronet since it was converted into a music and club venue. I am making a series of drawings about its history and collaborating with John Whelan and the People’s Company who will stage a play on the 8th November at the Coronet. Please contact us if you have any stories or information connected with the building that has been at the heart of the Elephant and Castle for 145 years.