Father Potter of Peckham – who worked out of a deserted pub 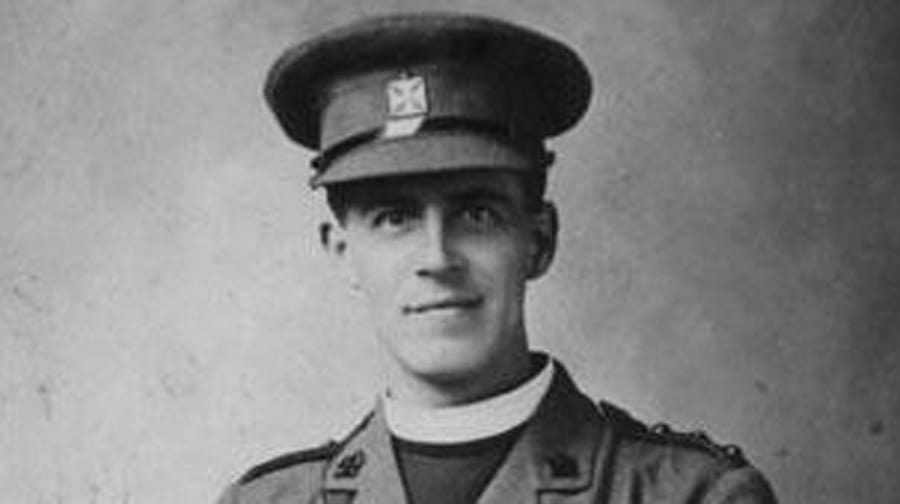 Father George Potter in his army chaplain’s uniform in World War One. (Photo courtesy of All Saints Church, South Wimbledon)

A vicar trying to do the Lord’s work in the 1920s “slum parish” of Peckham set up his vicarage in an old deserted pub where he founded a new religious order for the betterment of impoverished boys.

George Potter became known as Father Potter of Peckham after he took over St Chrysostom’s Church in Hill Street in 1923.

The Sunday before he arrived there were three people in the congregation who managed a total collection of six and a half pence. Potter set up camp in the church hall until the rats drove him out and in desperation he took over a derelict pub around the corner. He put a sign up in the window of The Eagle in Bells Garden Road saying “This establishment is under entirely new management!” and that was his vicarage for two years until the modest congregation moved on, ultimately to Linden Grove.

In 1924 Potter founded the Brotherhood of the Holy Cross. Wearing the habit of a grey cloak with a knotted cord, he and his brothers took care of hundreds of ‘delinquents’. In the foreword to Potter’s 1955 book, “Father Potter of Peckham”, the then Bishop of Southwark wrote of the Brotherhood: “Father Potter was appointed Vicar of the derelict church of S. Chrysostom, Peckham, where he had to improvise in all sorts of ways to meet the needs of his neighbours, both physical and spiritual. From that experience was born the idea of a group of like-minded men bound together by a simple rule of life, but utterly devoted to the service of ordinary people.”

Father Potter set up a hostel in Nunhead to take in and reform boys who had committed a crime. In his book Potter wrote: ‘It is extraordinary how these boys get the impulse to do the wrong things they do. Most came to us for petty larceny, others, usually the more intelligent type, have been caught at really clever practices. We have had boys of fourteen who have forged cheques, or mended and stolen motor-cars. Others, again, have shown considerable skill at housebreaking. Many of these crimes have needed brains and courage.’

In one instance a policeman brought one of the younger boys back to the hostel after he had stolen sixpence from a schoolboy on Peckham Rye. Father Potter asked if the poor victim had not shouted or pursued the juvenile villain – ‘He couldn’t’ replied the boy, ‘I’d pinched his trousers!’ Father Potter and his fellow brothers did their upmost to feed, clothe and educate the young tearaways, but it was rarely plane sailing and he gives amusing examples of some answers given in class. When he asked what his subjects knew of Good Friday, five different boys all said he was a friend of Robinson Crusoe and one said ‘It’s a day when Jesus Christ was killed in a fight. He was shot in the side.’ To the question, ‘Which king of England was beheaded?’ a boy answered, ‘Henry the Eighth.’ Father Potter explained his error to which he added, ‘Sorry, I thought you said big-headed’. On arrival at the hostel, Father Potter would take the basic details from boys, but even this was sometimes a struggle. One boy did not even know his own mother’s name. ‘What does your father call her?’ asked Potter. ‘Coo, Lor! All sorts of things!’, he replied. When Father Potter insisted he must surely know his mother’s name, the boy said ‘I dunno, Father, straight! Shove ’er down as Lizzie.’

Father Potter enquired after a boy who gave his name as Ivan, if he was of Russian dissent. ‘No, Father got it from a book on dog racing!’ came the reply. A boy who was sent to Father Potter’s hostel in 1932 gave his impressions on arrival to the community’s Quarterly magazine. He wrote: ‘It was in the year 1932, I was standing in front of a judge in the Juvenile Court. He said to me,”You will go to Fr. Potter’s Hostel for two years.” I said to my pal, “Gee, ain’t it awful.” He said, “Not ‘arf.” A little while after, Fr. George Potter came for me. He looked so big and strong, but he had a kind face, so I wasn’t really frightened. On the way home on a ‘bus, he said to me, “What you want is a jolly good hiding.” I looked at him and shuddered. The next day I was taken to Brother John. In him I saw a kind, but firm man. For a week I tried all sorts of pranks. I was a devil. But they were so kind, I suppose I saw sense. But don’t think there ain’t no discipline. Brother John can keep you in and make you work and I am told Fr. George can lay it on pretty thick at times. I hated church when I first came, but I like it now. Our chapel is very homely. I would say that the Brothers have a very trying time. They work all day long getting our food ready and washing our clothes. What I like too, is that they ask you to do things and don’t shout at you.’

Father Potter died at Linden Grove on Feb 15, 1960, aged 73, leaving behind him a legacy of true social work. He summed up his motivations when he wrote: ‘A child is such precious material. Many poor and neglected kids have grown up and left their mark on the world — even changed the face of history. There was an Abraham Lincoln — and there was an Adolf Hitler. Ours is a great responsibility.’ With thanks to John Beasley’s Origin of Place Names in Peckham and Nunhead (2010)