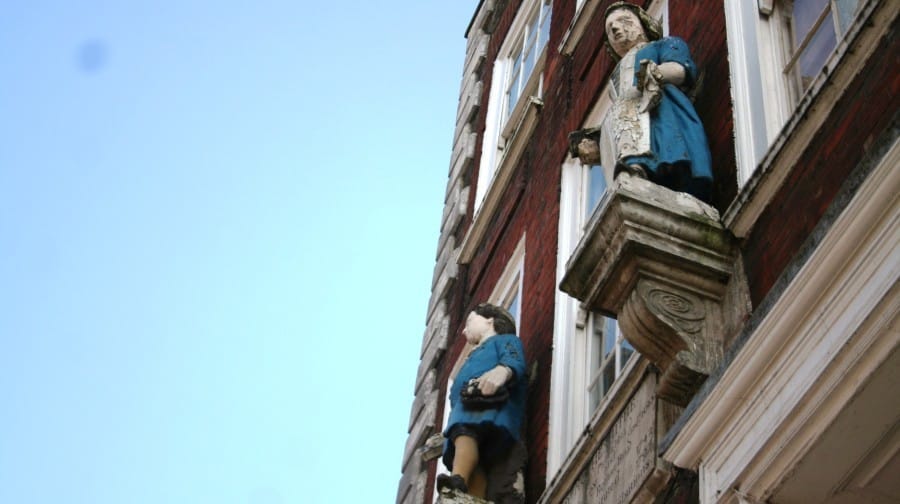 Two ‘free schools’ were given the go ahead in Southwark earlier this month, inviting fresh debate over whether they are the saviour of the school places crisis, unshackled from rigid Government legislation, or the beginning of the end with even qualified teachers seen as too ‘old school’.

But free schools are not new to the borough, and evidence of one charming example can still be seen in St. Marychurch Street in Rotherhithe, where two stone statues of school children guard the entrance in their traditional ‘bluecoats’ to this day.

The ‘Free School’, as it was first known, was founded by Peter Hills and Robert Bell in 1613.

Hills was a master mariner, proven by his position as Elder Brother of Trinity House,  an organisation founded by Henry VIII to run coastguard services and provide lighthouses and buoys and assist sailors. Less is known of Bell, who is said to have been a “worthy friend” of the parish rector at that time, Thomas Gataker.

Under the “influence and advice” of the good Reverend Gataker these two men took it up one themselves to establish a school in a humble appendage to St Mary’s church to educate eight sons of seafarers from the parish.

Hills further left a sum of £3 a year in his will to pay a school master and another £3 a year for the churchwardens for the poor.

Hills’ donation, though undoubtedly generous, was not enough to sustain the school so money was regularly collected in the church collection plate as well as at special Hymns and Sermons services put on annually for the purpose of raising funds.

Reverend Edward Josselyn Beck, who became the rector years later in 1867, wrote  in his book, Memorials to Serve for a History of the Parish of St. Mary, Rotherhithe in 1901:

“The Churchwardens stood at the church door at the close of the service with a Charity boy and girl at their side clothed in the quaint dress of the time , and a goodly collection was gathered in the old painted plates bearing the inscription ‘Remember the poor Charity children for God’s sake and your own.’”

At that time the 40 boys and 25 girls who attended the school were clothed yearly and “taught the principles of the Christian religion,” according to Beck. All were taught to read and write and boys were taught to ‘cast accounts’, while girls were taught to knit and sew.  One of the Girls would be taken into the School House, lodged, boarded and instructed in household work, “in order to render her more completely fit for service”

In the early eighteenth century, a lump sum was donated so the school could expand significantly, taking on 65 boys and 50 girls, according to Stephen Humphrey’s ‘The Story of Rotherhithe.

In 1739 an amicable fund was set up allowing the school to accommodate 77 boys in total and it was when all the separate funds were amalgamated in 1942 that it became formally known as The Charity School. In 1795, they splashed out £400 on a house across the road at 70 St Marychurch Street, where two Portland stone figures still stand overlooking the front door.

The old house-cum-school, which was Grade II listed in 1949, has since been converted into offices, but still bears the same distinctive doorbell from its school days.

A brass dedicated to Peter Hills is  displayed in St Mary’s church. The inscription reads: ‘Here lies buried the body of Peter Hills, Mariner, one of the eldest Brothers and Assistants of the Company of the Trinity, and his two wives ; who while hee lived in this place, gave liberrally to the poore, and spent bountifully in his house: and after many great troubles, being of the age of 80 yeeres and upward departed this life without issue, upon the 26 of February, 1614.’

When St. Mary’s School in Lower Road opened in 1836’ the Charity School girls were sent there instead and the boys stayed put, with a further extension into the garden allowing 150 boys to be in attendance there by the end of the nineteenth century. Beck writes: “This admirable institution survives to the present day….and it is now a flourishing school of 200 boys doing a most valuable work for the rising generation of our parish.”

The success of the Charity School saw others follow in its wake. The United Society’s School, established in 1755, was gifted a piece of land by the Duke of Bedford in 1791 in Trinity Street (later part of Rotherhithe Street), where a school and house were built. Again, the school largely catered for the children of mariners’ with a third of pupils registered in 1842 belonging to shipwrights and a majority of the remainder were from families connected to the river.

A Hymn written by a local poet for a special service to raise funds for the school on December 18, 1808, reads:

From your hearts your voices swell,

To the strength of our salvation.

To the Lord your transport tell.

To his goodness for their trial,

For with Him is no denial.

When for aid the friendless kneel.

He will always be propitious

To the orphan in distress ;

From the wicked and malicious.

He will shelter them and bless.

He shall live for everlasting.

High above all empire rais’d;

And with offerings,prayer, and fasting,

Daily shall his name be prais’d.

Hello,
Could anyone please tell me if there is a list of pupils who attended this school. My ancestors live in Rotherhithe going back many generations. Our surname is Westbrook. Kind regards, Sarah

Southwark NewsHistoryFree schools are actually rather ‘old school’ in Rotherhithe