From Blitz to blossoms – how Burgess Park grew from wartime rubble 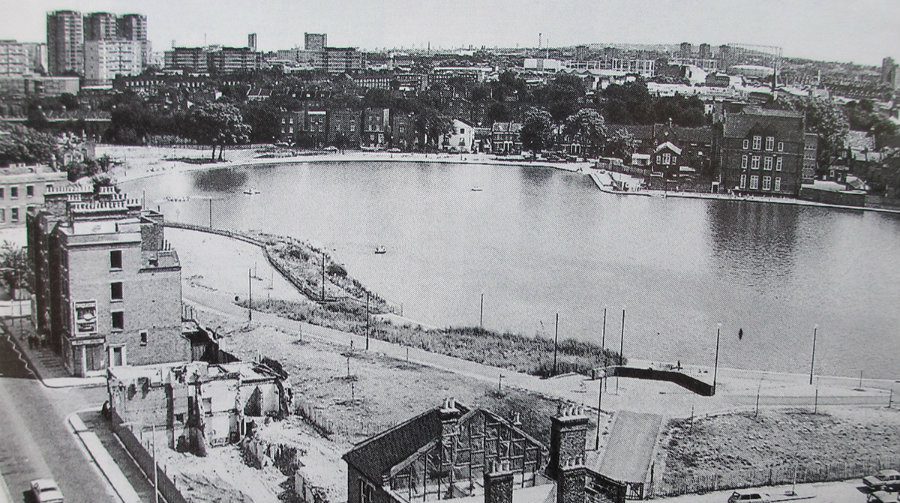 To put a twist on the common saying: “I remember when all this was houses.”

Burgess Park, for all intents and purposes, shouldn’t exist. The 140-acre park, bordered by Walworth, Camberwell, Peckham and Bermondsey, is an anomaly: a green oasis in a concrete desert, a new park in an historic city, the beautiful result of London’s most terrifying hour.

Visiting the park today, perhaps to throw a hopeful line into the lake for the biggest fish in the capital or to play a quick game of five-a-side football, it seems unimaginable that the green expanse was once houses, factories and bustling streets – or a “long-decaying industrial shell”, according to a slightly more gritty pre-war news report.

And, were it not for the devastating impact of the Nazi’s Luftwaffe during the Blitz, it may have stayed that way forever.

When Southwark’s urban planners emerged blinking from tube stations and Anderson shelters after the nightly raids from the Luftwaffe, they knew that the bloody horror of war had given them an opportunity.

When peace was declared and most of London began to rebuild itself, plans were unfurled to bulldoze a huge swathe of industrial and residential land to make way for the capital’s newest, and, it was promised, most stylish park, a huge undertaking.

The conversion from “semi-slums and narrow streets” to acres of parkland was understandably far from seamless.

The recent construction work at the Elephant and Castle roundabout, to give it some context, was highly disruptive and much-maligned. It caused noise, dust and traffic headaches. Now imagine a construction scheme that covered an area over a hundred times bigger and lasted for half a century.

It was a monumental project that flew in the face of urban development theory: clearing established city landscapes for a rural replacement. The emergence of the park happened at a snail’s pace. The project began in earnest in the 1970s, when hundreds of families were informed that there houses were to be forcibly bought and bulldozed.

This, understandably did not go well and the project was slammed for its chaotic approach, which one critic described as “a string of unconnected and haphazard housing schemes, clearance orders and industrial redevelopment plans.”

The Grand Surrey Canal, which had once injected industry and employment into the area before becoming a symbol of economic decline and a drowning hazard to children, was drained and filled in in preparation for the green space – an emblem for a changing way of life in north Camberwell.

As the years dragged on, more and more houses and factories were felled and replaced by an ever growing carpet of grass, trees and eventually a lake.

A 1945 street map before the park’s construction

As the park grew, it took on many names: the painfully literal North Camberwell Open Space first, then briefly St George’s Park, before Burgess Park was decided upon, to honour long-time councillor and Camberwell alderman Jessie Burgess.

Despite the park’s inexorable growth, by the 1990s the scheme still drew the ire of the borough’s residents.

A young Donnachadh McCarthy, now a News columnist, slammed Southwark Council (who took over the running of the project in the mid-1980s) in a 1992 news article for announcing that space which had been cleared by destroying 200 properties would now be used to build… property. He described it as “a complete betrayal of people ousted from their homes”, and many agreed.

The loss of pubs to the green tide was equally mourned, with the Walworth Imprint pleading “what is a village green without a pub?” Destroying our factories and homes is bad enough, seemed to be the prevailing opinion, but taking on our pubs was just a step too far.

As the nineties wore on, the park became something of a dark spot in Southwark: an embarrassment to planners and a constant reminder to residents who had lost their homes and gained little.

One planner noted in 1996 that the “park looks more like a wasteland in some places” while the then-Leader of Southwark Council Jeremy Fraser was equally damning, if more poetic, when he said: “It’s the ugly duckling that we want to turn into a swan” – a world away from the “Hyde Park of South London” and “the envy of Europe” that was promised.

At the turn of the millennium, however, the park finally came of age. Millions of pounds worth of investment and grants, combined with the creativity, passion and engagement of community groups such as Friends of Burgess Park, gave the park the shot in the arm it so desperately needed.

Burgess Park is now a vibrant facility for the whole of the borough’s residents to enjoy, from BMX-riding teens to picnicking pensioners. What began with the falling of Nazi bombs has resulted in the creation of something completely at odds with the Luftwaffe’s aims: a park where Southwark’s diverse community can come together in a landscape dominated by beauty and hope rather than rubble and fear.

There’s more information on this website: http://www.bridgetonowhere.friendsofburgesspark.org.uk/the-story-of-burgess-park-heritage-trail/
And you can contact Friends of Burgess Park to be kept informed of events in the park and get involved.

I lived here in Caldew Street as a young child before Herman Goring kindly prepared the site for redevelopment. Thankfully we survived and were rehoused to D’Eynsford Road off Camberwell Green when Herman decided to persuade us to move again. This time to Grove Lane where we finished growing up. I remember a small swing park at the end of Caldew street where I played on the roundabout and swings. And, there was a shop on the corner of Caldew Street where I would be sent to buy a penny Oxo for my Dad’s dinner. And there were two brick built air reaid shelters in Caldew Street where we would go to sit out Herman’s unwelcome visits. All gone now to make way for a beautiful park.
Best wishes.