All the fun of the fair – when the Thames froze over 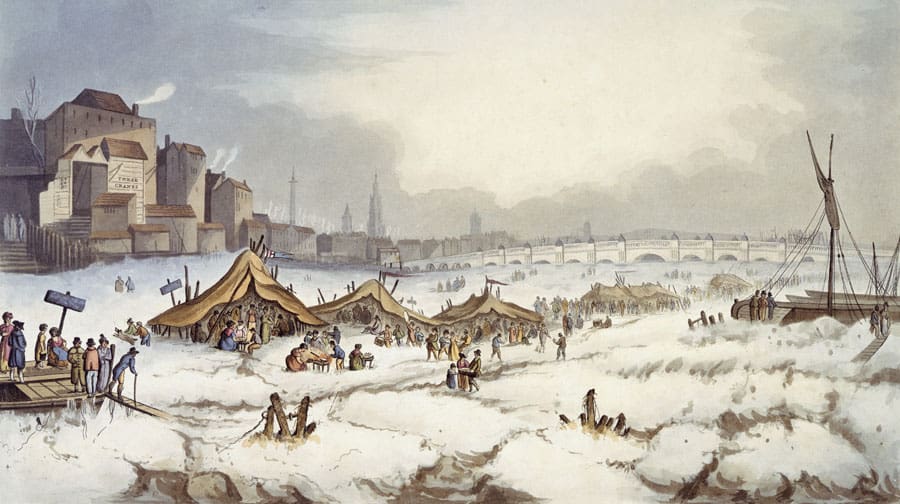 Colour aquatint showing the frost fair on the Thames published 18th February 1814. Aquatint. 'View of the Thames off Three Cranes Wharf when frozen Monday 31st January to Saturday 5th February 1814 on which a fair was held attended by many hundred persons'.

So commonplace are these transient traders that they almost feel embedded in the city’s fabric but where they did actually come from?

You’d be forgiven for thinking that fad-incubating Shoreditch engendered the trend but in fact, you’d be wrong. London’s first pop-up age was way back in the 16th Century – in the form of Frost Fairs on the River Thames.

“Frost fairs were like a street on ice,” said Alex Werner, Head of History Collections at the Museum of London. “There were temporary tents on either side of the river selling food and drinks. People played games and skated. It was very exciting.”

The freezing cold winters of times gone by, coupled with the architecture of the old London Bridge – with its closely positioned ‘starlings’ [bridge legs] to support the weight of the houses on the Bridge – meant that the Thames, every ten years or so, would come to a standstill and freeze over.

In the first instance, this spelled financial difficulty for traders who depended on the river for work – particularly the watermen, who earned a crust by ferrying people from Southbank to North. However, it wasn’t long before entrepreneurial spirit took over and local businesspeople realised that the novelty of a frozen Thames could easily translate into a golden opportunity. If people couldn’t get to them, they’d come to the people.

“Watermen would set up shop at the river stairs and help people down onto the ice – and expect a few pennies for it!” said Alex. “There’d be all sorts of things on the ice – pubs, food vendors, there was even a printing press. People used to get prints with their names on to mark the day. They’d show it to their kids and grandkids, like a souvenir.”

Alex describes how the frozen landscape were a wonder to locals. “The Thames didn’t freeze flat. In places, there were mountains of ice – it wasn’t a level surface. Some areas had boulders of ice which became stuck like a landscape of Antarctica,” he said.

Heat permeated the chilly scenes. “You’d get hot and cold mixed together. There’d be fires on the ice. Braziers would be burning coal to keep people warm. People would be drinking hot alcoholic drinks. Whole oxes would be roasted on the ice and people would come to watch. A lot of the appeal was the spectacle.”

A view of the Thames from Rotherhithe Stairs during the frost in 1789. Frost Fair on the ice with crowds and frozen ships. Hanging from a ship is a cage with a sign, ‘The original cat in the cage, by Roberts’.

Indeed, it seemed that some of the tradesmen specialised in spectacle-making. There are reports that it 1814, that a man brought an elephant onto the ice. For elephant riding?

“There were quite a few menageries and zoos off The Strand,” speculated Alex, “So maybe he brought the elephant down just to promote his business. Shows you how thick the ice was, though!”

But behind the aesthetic and spectacular appeal of the frost fairs lay something arguably even more special – the way that it drew people together.

“The ice attracted all spheres of society – from the king to the poor. Charles the second was supposed to have gone down onto the ice in the 1670s. The rich

and the poor would mix,” said Alex.

“Usually, in London, the very wealthy would try to keep themselves separate from the poor because they’d be in their fine carriages and wouldn’t want their nice clothes getting dirty but on the ice, there was no distinction.”

“It gave people who couldn’t usually benefit from free entertainment the chance to enjoy themselves.”

Alex estimates that there were probably around 20 frost fairs from the late 16th century up until the early 19th century. The most famous ones are 1814 because it was the last one and 1584 because a lot of relics survived from it. The Museum of London ran an exhibition on Frost fairs in 2014 and

their Docklands site has a small, permanent exhibition.

“We have gingerbread bought in the 1806 fair, a pewter tankard bought in 1683 and a spoon bought in 1683/4. Things tended to be inscribed with a name and the date – like a memory.”

So, can the Thames expect a frost fair resurgence in the future? Unlikely – the structure of the new London Bridge means that it’d be incredibly difficult for the water to come to a freeze.

So, while we wait for the Siberian freeze to descend, we’re just going to have to make do with Shoreditch’s Box Park.

Here is a souvenir silver spoon from the Frost Fair of 1683 inscribed with: ‘This was bought at the faire kept upon the Midle of ye Thames against ye Temple in the great frost on the 29 of January 1683/4’.