Held in the ornate old Music Hall of Surrey Gardens in Kennington, it was attended by thousands of guests 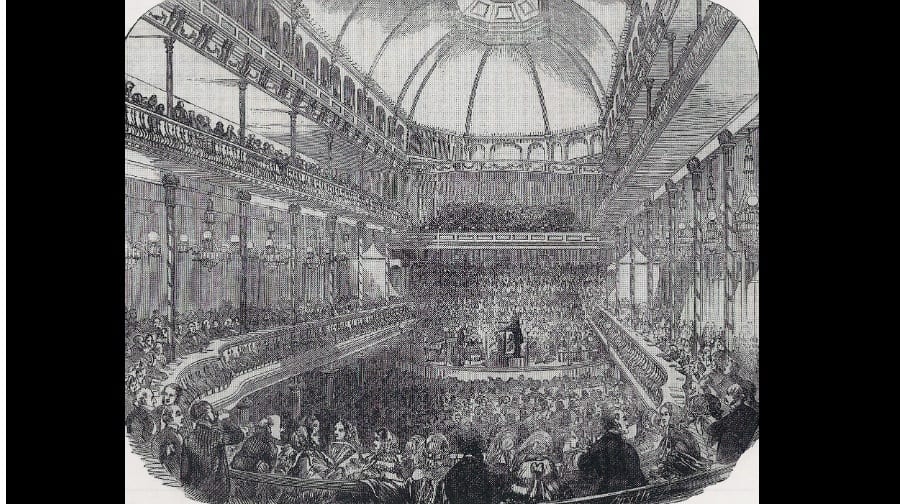 On June 30 the News reported on the unveiling of a statue dedicated to revered Crimean War nurse, Mary Seacole, which became the UK’s first statue for a named, black woman.

The giant bronze £500,000 tribute to Mrs Seacole, positioned outside St Thomas’ and facing the Houses of Parliament, was a token of gratitude for the compassion and courage she showed to hundreds of Britain’s soldiers during the nineteenth century conflict.

Mrs Seacole was born in Jamaica in 1805 and died at her home in Paddington in 1881, with few personal ties to the borough.

But local historian and black history author Stephen Bourne has uncovered an incredible story from 1857, of a huge four-day celebration – better yet, a ‘grand military festival’ – thrown especially for her in the ornate old Music Hall of Surrey Gardens in Kennington with thousands of guests.

The giant party for Mrs Seacole, who sat along a banqueting table between Lord Rockeby and Lord George Paget, was twice covered by The Times newspaper: on day two (July 28) and day four (July 30) of the prolonged party.

Though no by-line was given, the reporter described the scene vividly. The “crammed” hall was “tastefully decorated, with English, French, Sardinian and Turkish flags” while an orchestra played for the hundreds who gathered for her.

Performances were made by “united military bands” of the Royal Navy and Army, with music composed by the 1st and 2nd Life Guards, The Royal Horseguards Blue, the Grenadier Guards, The Coldstreams, Scots Fusiliers, Royal Engineers, Royal Artillery and Marines Nine, and a 1,000 strong outing by the Royal Surrey Choral Society.

“Never was the strong sentiment of loyalty, which is a distinctive and happy characteristic of the British people, expressed through the medium of sound with more overpowering grandeur,” the reporter added.

The atmosphere climaxing with encores of Rule Britannia, and Partant pour la Syrie, though the night went on until an “usually late hour”.

The reporter concludes that at the end of the concert, “the name Mrs Seacole was shouted by a thousand voices” as the party rose to say cheers.

The writer continues: “Few names were more familiar to the public during the late war was than that of Mrs Seacole.

“…Never did woman seem happier, and never was hearty and kindly greeting bestowed upon a worthier object.”

Saying her personal praise to the war nurse, often credited as having as much influence as Florence Nightingale, the reporter wrote: “Here the medical knowledge she acquired in the West Indies proved of eminent service.

“Her hut was daily besieged by Army Works and Land Transport men, for whom she would prescribe in cases of diarrhoea, dysentery, and other camp maladies.

“Not satisfied with this, she supplied them with creature comforts from her store, in most cases without payment or any hope of it.”

Mrs Seacole is herself quoted in the July 30 article, having given an interview to the secretary of state for war. The question is unknown, but her carefully chosen words were: “Give me my needle and thread, my medicine chest, my bandages, my probe and scissors, and I’m off.”

It was also noted that the four-day festival in raised hundreds of pounds for Seacole personally to “recommence her career if usefulness and activity”.

Included in The Times’ article from July 28 is a quote that emblazons the website of the Mary Seacole Memorial Statue Appeal, whose members campaigned for over ten years.

It reads: “Trust that England will not forget one who nursed the sick, who sought out her wounded, to aid and succour them, and who performed the last offices for some of her illustrious dead.”