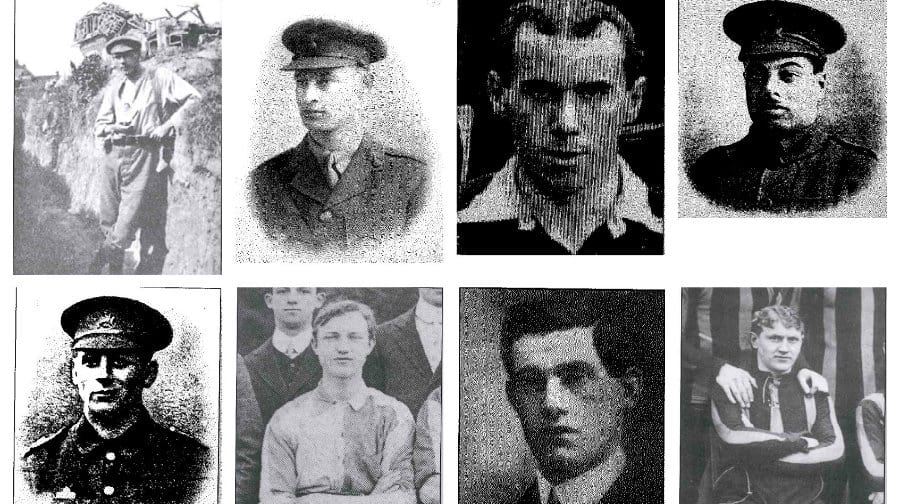 ­­It was George Orwell who coined the phrase: “Football is war, minus the shooting”.

He wasn’t far off, especially during the early days of organised action. Whereas today’s stars are often derided for their play-acting and aversion to physical play, at the turn of the 20th century football was a very different ball game.

Players could hack down opponents at will, fights went unpunished and, with no substitutes, badly injured players soldiered on for the full 90 minutes. You can see where Orwell was coming from.

But for a generation of players during the early-1900s, football was replaced by a very real conflict. When World War One broke out, thousands of young men across the country swapped boots for bayonets and touchlines for trenches.

Dulwich Hamlet were no different. The players who were cheered on by thousands of fans every Saturday found themselves shipping off to Europe and Africa to line up against a very different type of opposition. Many of them would never return to the playing field.

Stan Peart was one of 22 Hamlet players killed during the war. He was killed less than two months after arriving in France but his time as a soldier was, while brief, marked by bravery and drama. A former football, cricket and swimming captain at Bellenden Road School and a Southern Suburban League winner with Dulwich Hamlet’s reserves, the 23-year-old was assigned to be part of the bombers, a group of soldiers known as the “suicide squad” due to the danger they put themselves in.

His brutal death in Givenchy, France, after he selflessly signed up to take part in an extremely treacherous mission, was relayed to his family in no-nonsense terms by his company officer.

“I am afraid he was hit by a bomb, for when we found him next day, he was greatly damaged but quite dead,” Lieutenant H Persse wrote to one of Stan’s siblings. “The last I saw of him was when his supply of bombs had run out – he was standing his ground very coolly on top of a German trench using a bayonet to great effect.

“I always knew Stanley Peart as one of best men. When the call came for bombers (a most dangerous job) Peart didn’t wait to be selected – he volunteered and paid the price.”

Four days before Stan’s death, another Hamlet player was killed while refusing to back down in the face of extreme danger.

Archibald John Andrews, who also kitted out for the Surrey FA and Middlesex FA all-star teams, was struck down while taking part in that most desperate WW1 activity: the march across No Man’s Land. Without the support of either machine guns or artillery, Archibald helped launch an attack at Loos, in an attempt to take a German trench at Vimy Ridge.

They were bombarded with artillery to such an extent that, by the end of the onslaught, the official record stated: “The original ‘B’ Company had been swept away.”

What makes his death stand out, however, was the fact that he predicted it. Prior to the raid, Archibald was winning in a card game – something that soldiers viewed as unlucky during the war. When the men were informed of their upcoming mission he told a fellow soldier that he would not make it through the battle – and he was right.

The cruelties of the war can be traced through the fates of other Dulwich Hamlet players who never made it home.

Reginald Astill and George Arthur Popple were both mown down on the first bloody day of the Battle of the Somme in July 1916. Tom Rose, the only Dulwich player to score a hat-trick on his debut, also suffered a fate common to WW1 soldiers: a fatal infection to a seemingly innocuous wound. Others, like Louis Frank Seidel, died in mysterious circumstances – the only thing certain is that the fourth-team Hamlet player never returned home.

Eddie Bescoby died after being stabbed with a bayonet, Sidney Beales went missing in action and Percy Sills, who died five days before peace was declared, died of influenza without ever making it to the continent – spending the majority of the war training in Britain, as well as combating Irish rebels during the Dublin Easter Rising in 1916.

The 22 Dulwich Hamlet players who died in WW1 will forever be remembered for both their feats in blue and pink as well as in khaki. Whether it was in Champion Hill or the Western Front, the bravery and dedication of these men once the whistle blew will never be forgotten.

With thanks to Roger Deason and Jack McIlroy of the Hamlet Historian, whose book “When Shall Their Glory Fade?” details Dulwich Hamlet’s fallen soldiers in more detail. Further information is also available at thehamlethistorian.blogspot.co.uk.