Halloween history special: Do you want terror with your tipple?

The boozers where things go bump in the night 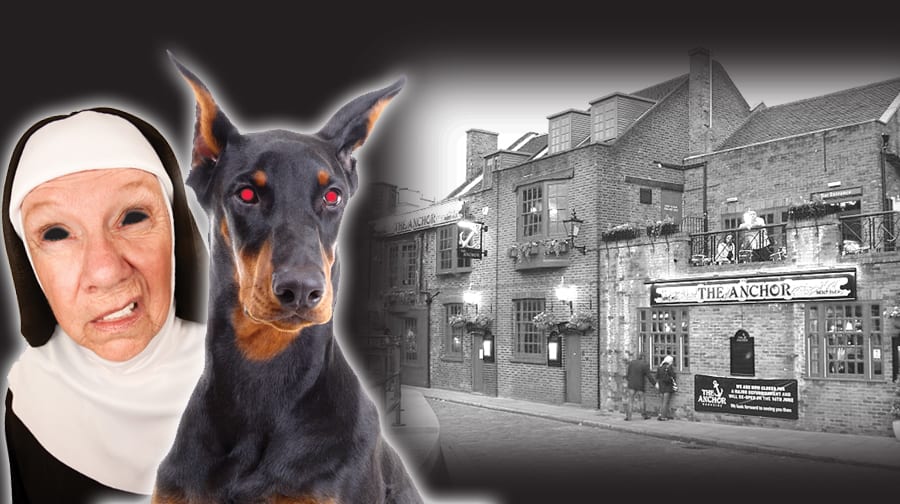 From ghostly nuns to demon dogs, Southwark is positively ridden with ghouls – and it seems that the borough’s watering holes are particularly susceptible to unwelcome guests.

A Southwark pub without a resident phantom is rare indeed, with every boozer boasting its own blood-chilling tale.

So, with Halloween upon us, pull up a barstool as we tell the tales of some of the borough’s more terrifying taverns. Despite its picturesque exterior and tourist-heavy clientele, the Anchor Bankside in Park Street, Borough, has a ruff past.

While it was a once-popular watering hole for river pirates and smugglers, the historic pub is instead reportedly haunted by a four-legged fiend. Many years ago, a punter was attacked by a cut-throat gang while drinking late at night. His loyal pooch raced in to defend him but could not stop the men dragging off his owner. One of the heartless attackers slammed the dog’s tail in a door, cutting it off, before killing it. Proving that a dog truly is a man’s best friend, the dog, according to some, can still be seen to this day in the pub, howling in sorrow at his missing owner – and tail.

As if that wasn’t enough, the riverside pub is also said to be haunted by countless small children who died while mud-larking. Wet, muddy footprints are said to appear without warning on the pub’s wooden floors late at night.

The beautiful George Inn around the corner in Borough High Street boasts an array of equally ghoulish tales. Once a popular site for bear-baiting, the anguished roars of the poor beasts can still be heard on windy nights.

A former proprietor, with an inexplicable and seemingly endless hatred for technology, is also said to wander the pub, scrambling computers, opening and closing tills, turning lights on and off and causing havoc with the sound system. Unexplained and terrifying images also show up on CCTV footage, with engineers stumped and scared in equal measure.

Borough, it seems, is a real hotbed for ghoulish activity, with The Market Porter in Borough Market also claiming its own terrifying tale. The pub was the site of one of the more bizarre murders in London’s history, which occurred when two drunken friends began arguing one rainy night during the 1800s.

A man named Edward Lamb became so incensed with his drinking buddy, a market tradesman known as “Flash Alf,” that he stabbed him in the face with the nearest thing he could find: his umbrella. He struck him with such force that Alf died – although it appears that in the afterlife the two friends remained close. The pair are still said to be seen lurking in the shadows outside the pubs on rainy nights.

The borough’s ghosts are not only in the north, however. Pubs in central and southern Southwark also boast their own stories spooky enough to make even the most hardened drinker hesitant to walk home on his own.

The Thomas A Becket pub, now closed, in the Old Kent Road is famous for its sporting and musical heritage, but also has a less-spoken about ghostly tradition. While Mohammed Ali is one of the fearsome fighters to have visited the boozer, former punters are adamant that the most terrifying guests at the pub were actually the ghosts of nuns. It is claimed that the sisters wander the corridors whispering to themselves, while one of the bedrooms in the pub was so haunted that no one could spend more than five minutes in it without being driven out in fear.

Another pub with a creepy nun problem is, unsurprisingly, The Old Nun’s Head in Nunhead. A former nunnery on the site was ordered to shut down by Henry VIII during the Reformation, to the disgust of the Mother Superior, Elizabeth Barton. She refused, enraging the King who chopped off her head and put it on the spike on nearby Nunhead Green. It is said she can still be seen wandering the pub, while patrons and staff also report strange and ancient keys appearing in keyholes without explanation.

There are countless other pubs across the borough with their own scary stories, from Charlie the ashtray-smashing poltergeist in the Anchor Tap to the ghosts of burned lodgers at the fire-plagued Globe pub. It is up to you how many of these stories you choose to believe – but this Halloween, if you’re brave enough to venture out for a pint, be prepared for a little terror with your tipple.

Southwark NewsHistoryHalloween history special: Do you want terror with your tipple?