“As children we were aware of our grandfather because we had his Victoria Cross at home. I remember it well,” WW1 hero's grandson told the News 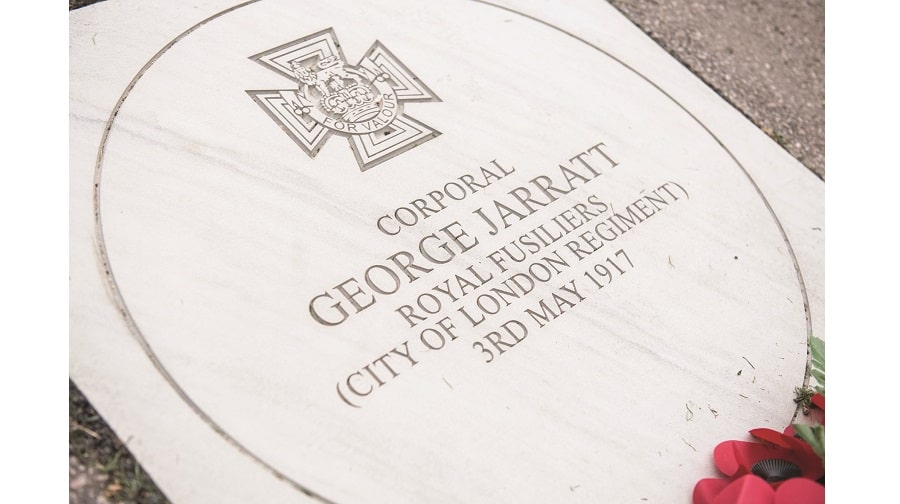 Nearly 100 years to the day since his death, tributes have been paid to perhaps the bravest man to have ever come from Kennington.

A memorial service to celebrate the achievements of World War One hero and Victoria Cross recipient Corporal George Jarratt, was held at Kennington Park on May 5, in which a ceremonial paving stone was unveiled in his honour.

George was born in Kennington on July 20, 1891, and lived in White Hart Street.

In the early summer of 1915 he married Gertrude Elkins. And after a short spell working as a clerk for a gin distillery, he joined the army.

In 1916 their daughter Joyce was born, and George began service with 8th Battalion, The Royal Fusiliers (The City of London Regiment).

He was awarded the Victoria Cross for a gallant act, committed aged 25, on May 3 1917 near Pelves in northern France.

Together with other wounded men, George was taken prisoner and held under guard in an underground dug-out.

The same evening, the enemy were driven back by allied troops, who began shelling the dug-out where George was being held.

A grenade fell in the dugout, and without hesitation George placed both feet on the grenade. The subsequent explosion blew off both his legs. The wounded were later safely removed to allied lines, but Corporal Jarratt died before any men could reach him.

By his supreme act of self-sacrifice, the lives of his wounded comrades were saved. George’s citation for the award declared his act “most conspicuous bravery and devotion in deliberately sacrificing his life to save others”.

The Victoria Cross is the highest award for gallantry that can be awarded to British and Commonwealth Forces.

News of the violence, and the bravery George displayed, quickly became public knowledge back in Britain, and among his old friends and family in Kennington.

That same year, on July 21, Gertrude and baby Joyce met King George V at Buckingham Palace (pictured) when he presented them with the Victoria Cross that George had earned with his last living act. The King presented 32 Victoria Crosses that day, eight of which eight were presented posthumously to soldiers’ families.

Speaking after the ceremony last week at the Civilian War Memorial Path in Kennington Park, George’s grandson Terry Harwood told of how he had grown up hearing the story from their grandmother Gertrude.

Terry and his two brothers were raised in Romford by George’s daughter Joyce, who was also born in Kennington. The 69-year-old told the News: “As children we were aware of our grandfather because we had his Victoria Cross at home. I remember it well.”

But tragedy struck the family when Joyce died young in 1960. After her death, their grandmother Gertrude gave her late husband’s medal to the Royal Fusiliers, and it was kept at the Tower of London. Terry said the ceremony on Friday was a “poignant” occasion, for the fact that it brought the three brothers together again for the first time in several years. Terry read a poem he had written “Sonnet to an unknown Grandfather”, and George’s citation was read by Terry’s brother Robert Harwood.

It was also attended by serving members of the London Regiment, and the Royal Regiment of Fusiliers, George’s descendant regiment.

The ceremonial paving stone was created and as part of a campaign launched to honour all Victoria Cross recipients from WW1.

A total of 628 Victoria Crosses were awarded during the First World War, and a stone for each of them will be laid in the birth place of their recipients, to honour their bravery, within their old communities.