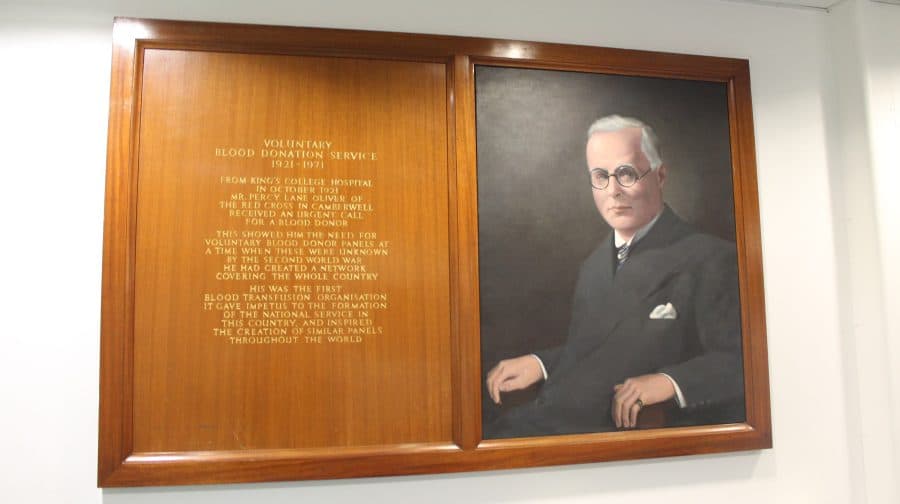 A portrait of Percy Lane Oliver, which hangs at the entrance hall of the Haematology Department of King’s College Hospital

In England 8,000 people a day require a blood transfusion to stay alive and, aside from the generous donors, they have a Camberwell librarian to thank for establishing a national donor service back in 1921.

Percy Lane Oliver has slipped into relative obscurity since his death in 1944, but his actions will continue to help save the lives of millions of people worldwide as his pioneering blood donation service went from humble beginnings in south London to a global phenomenon.

Percy’s family moved from St Ives to London in 1883, when he was five years old. As a teenager he won a Science and Art Scholarship.

He did well in his exams but was rejected by the Medical Board and the aspiring doctor ended up working as an assistant librarian with Camberwell Borough Council in 1893. In 1901 he was transferred to the Town Hall staff, where he remained until his retirement. In the years leading up to the First World War, Percy was a founder member for the Camberwell Division of the British Red Cross and became its Honorary Secretary in 1910.

During the war, he served in the Royal Naval Air Service, stationed at Crystal Palace, but his contribution to the local war effort was far greater. With the help of his wife, Percy set up and managed four refugee hostels in Camberwell for those fleeing persecution. In 1918 he was summoned to Buckingham Palace to be awarded an OBE by King George V for his charitable work. But his greatest contribution was yet to come.

In October 1921, as the Honorary Secretary of the Camberwell branch of the Red Cross, he got a call from the nearby King’s College Hospital in urgent need of a blood donor. He went to the hospital and saw Sister Linstead, a Red Cross worker, become the first voluntary blood donor. He was so struck by this experience that he and his wife immediately set about organising a panel of blood donors locally, whose health and blood details were checked by the hospital and kept on record cards in his home in Colyton Road. Someone manned the phones at all times and in the first year they received one call and registered four donors. Five years later there were 400 donors and they took over 700 calls.

Percy had to move house to cope with the exponential growth of the service he set up and he started travelling around London and the rest of the country to petition others to set up similar local blood transfusion volunteer services. In 1926 the London Blood Transfusion Service got the official support of the British Red Cross Society and ultimately developed into the National Blood Transfusion Service which is so well-known today.

A sign to the Oliver Ward, also in King’s College Hospital

Hospitals were never charged for the service and the cost of running the organisation from his home in Nunhead was met by charging private clinics, some grants, and Percy’s own fundraising efforts. As the service was on the brink of becoming national, not everyone was a fan of the idea, particularly as Percy was not a medical professional. Many donors felt they had to keep their involvement with the service a secret even from their families despite Percy’s unrelenting work giving talks up and down the country to encourage the establishment of more donor services.

In 1940 he gave a talk in his home town of St Ives and the master of ceremonies encouraged the audience “… not to stand in the way of would-be donors, but rather to go out and radiate the wonderful work that had been done and was being done by blood transfusion…”

Percy’s work attracted worldwide attention and many countries sent representatives to meet him and hear him speak who then set up similar organisations. He did receive some recognition of his work in his lifetime, the highlight of which must have been when he was invited to deliver a talk on the subject at the palace by King George himself. Almost 30 years after his death on April 16, 1944, a memorial portrait was unveiled in the entrance hall of the Haematology Department of King’s College Hospital, in 1972 by Her Royal Highness The Duchess of Gloucester.

A framed copy of this is in every Regional Transfusion Centre in Britain, and another is in the Donor Centre in Rome. In 1979 the Greater London Council provided an appropriate plaque on the house in Colyton Road where so much of his work was undertaken. With thanks to Tom Richards and his article, Percy Lane Oliver – founder of the voluntary blood donor service