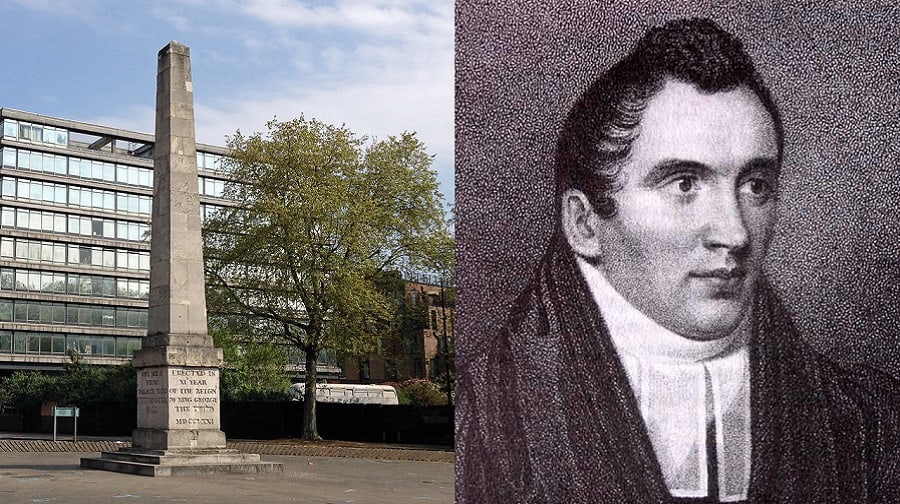 Left: The obelisk near to where the chapel would have stood, right: John Church

Where now there might exist Heaven or XXL, the early nineteenth century equivalent were ‘molly houses’, boozers where gay men would gather to enjoy themselves.

These pubs would have ‘marrying rooms’ or ‘chapels’. Often, what took place was less of a ‘marriage’ so much as a coupling, often in plain sight of others inside the tavern.

But formal bonding did take place in these spaces, with couples staying together in partnership afterwards.

And the first ordained minister to officiate at these ceremonies is thought to be the appropriately-named Rev John Church, the regular preacher at Obelisk Chapel in St George’s Fields.

This would have stood near the current obelisk at St George’s Circus,  between Waterloo and Elephant & Castle, at the top of London Road. The obelisk near to where the chapel would have stood

Church’s origin story is murky. He was left on the doorstep of either St John’s Church in Clerkenwell or St Andrew’s Church in Holborn sometime in the 1780s.

With no idea who his parents were, parish elders sent Church to the Foundling Hospital, where he got his name.

His sexual orientation first became apparent here, too. Aged only nine-years-old, he was discovered by the nurses playing “forbidden games” with the other boys.

The governors of the hospital undertook to apprentice him at an early age “to obviate the possibility of the contagion spreading among the rest of the boys who partook of that charity.”

He was indentured to a gilder’s in Blackfriars Road (some accounts say Great Portland Street), where he lived virtually as a domestic servant.

In his teens, Church fell in love with a younger girl who served the same family; when they discovered he was having relations with her, he was locked in a coal bin.

This led to a quarrel with his master, and Church broke off his apprenticeship to practise preaching the gospel.

He married in 1801 to the daughter of a Mr Elliott of Hampshire, and was a travelling preacher. But his loves were men, including a William Webster whom he met at Tottenham Court Road chapel. With Garrett’s help, Church was ordained into a permanent position at an independent chapel in Banbury, Oxfordshire in 1807.

This did not last long. In August 1808, Church had his office curtailed when rumours began to spread of him ‘sodomising’ young men in the congregation.

“I had some scandal while at Banbury,” he writes in his autobiography, The Foundling. “I shrunk from investigation, because I was conscious of having acted imprudently,” he admits.

An anonymous contemporary, who in 1817 republished love-letters of Church’s in a tome called The Infamous Life of John Church, accused him of “several violent attempts upon some young men while at that place.”

Church always denied that. “I am not conscious of having done the actual crime,” he wrote in a letter. “If anything of that nature has been of which they speak, it must have been without my knowledge.”

A string of short-term preaching placements followed, before he eventually wound up as the regular minister at the Obelisk Chapel in Borough, living on Great Dover Street.

Here Church struck up a four-month relationship with an assistant called Edward – but the feelings weren’t fully reciprocated, it seems.

“I wish I had the honour of being loved by you as much and in as great a degree as I do you,” wrote Church to Edward on March 3, 1809.

“I find dear Ned many are using all their power to part us but I hope it will prove in vain on your side the effect that all this has upon me is to make me love you ten times more than ever.”

Only weeks later, the letters took an even more despairing tone. “I thank you for your company hitherto, I have enjoyed it four months exactly, but this is over for ever,” wrote Church. “I am miserable, nor can I surmount the shock at all.” Contemporary representation of the convicted at Vere Street

This change in tone was perhaps because Ned had turned ‘informer’ to those who were trying to discredit Church, writes Norton; but in any event the Reverend kept his position at the Obelisk Chapel.

In the summer of the following year, two men named Yardley and James Cook set up the White Swan molly house in Vere Street in the City.

A man who went by the name of Kitty Cambric persuaded Church to officiate as the chaplain at the molly house marrying room.

“Some of these wretches assume the names of women, and that they are absolutely married together … Church [being the] parson who performed the blasphemous mock ceremony of joining them in the ties of ‘Holy Matrimony,’” wrote an observer in their account of Church’s role at Vere Street.

Church was in “constant attendance” at the bar, and was nominated by the White Swan’s “miscreants” to be their chaplain.

Less than ten months into operating, the Vere Street Coterie was raided by the Bow Street Runners. Eight men were convicted under sodomy laws.

Six of those were violently pilloried by crowds in the Haymarket; two of the convicted were hanged at Newgate prison the following year.

Church was not implicated in the Vere Street Coterie until April 1813, when articles in the Weekly Dispatch linked him to the White Swan, alleging he had performed same-sex marriages to its clientele.

The Reverend took legal action against the Dispatch, which would later merge with the Express newspaper. Eventually it was ordered to cease publishing libellous material – but this was not without cost to Church.

He would write of seeing banners proclaiming him the “incarnate devil”, who had “filthy frolics in the temple of Sodom.” Vere Street would have been close to current day Clare Market, pictured

Eventually the rumours died down – until a trial in 1816 which would catapult him to even greater levels of notoriety.

This concerned Adam Foreman, a nineteen-year-old apprentice potter in Vauxhall.

Foreman alleged that Church came into his room at night, faked his mistress’s voice, and grabbing his genitals. Then, said Foreman, Church fled out of the room after being rejected by him.

In defence, Church’s lawyers told the court that it would have been too dark for Foreman to know it was the Reverend in his room that night.

Church denied attempted ‘buggery’ and common assault but was found guilty as charged. The case hit the headlines.

The preacher was jailed for 730 days in 1817 for his ‘unnatural offences’ which he spent in Horsemonger Lane Gaol, in modern-day Walworth.

Here the documentary trail goes cold. After being released from prison, he continued to preach at the chapel for another five years.

His last published sermon appeared in 1824 – when he would have been around 45-years-old. It is not known when he died.

“All the evidence indicates that John Church was a sincere, perhaps even pious, man who believed that gay love was congruent with the Christian way of life,” writes Norton.

“Once we objectively examine the blatantly prejudiced attacks upon his virtue, we find little indication that he was ever “vicious” in spite of his ‘vice.’”