How our hospitals carried on saving lives, despite being bombed during The Blitz 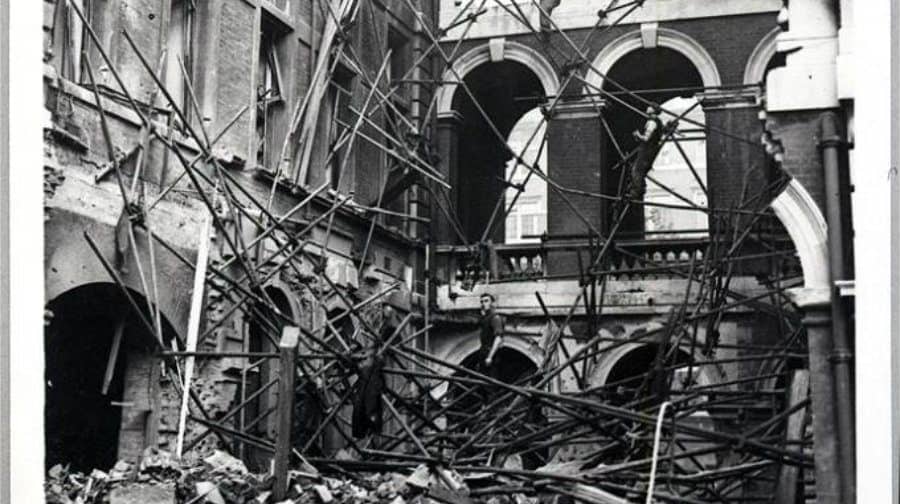 But while Guy’s and St Thomas’ suffered just as much devastation and tragedy as the city’s industrial and residential areas during the Blitz, one 92-year-old former nurse remembers the chaos with “almost warm memories.”

Rosemary Hitchcock signed up when she was just sixteen to work at St Thomas’ after her brother was tragically killed in action in 1940. Staff braved “terrible conditions” to keep both hospitals open, working in special underground wards. But despite these gloomy surroundings and sobering circumstances, the Devon-born pensioner speaks fondly of the comradery and comedy that prevailed through the famous Blitz spirit.

Rosemary Hitchcock, a nurse at St Thomas’ during the war

The pensioner recalls one occasion when she was caught on the surface during a raid with slap-stick reminiscence.

She said: “I remember being stuck above ground level, holding a jar of thermometers. If we broke a thermometer, we had to pay for it, so I was being very careful.

“Then I heard a Doodlebug starting to doodle above me – when the noise stopped, you knew the bomb was about to come down. When the Doodlebug hit the other end of the hospital, two policemen in pyjamas helped me to protect my thermometers and made sure they didn’t crash to the ground.”

The close bond between the nurses and police was a constant during the war – with the older brother-style protective nature of local cabbies also appreciated.

She said: “In my time off, I used to go off into London with my friend. Nurses in uniform were treated specially by the taxi drivers. The American servicemen tried to get into our taxis but the drivers were brilliant and refused to let them.

“Any police who needed hospital treatment were brought to us at St Thomas’. The police and the nurses were a great mix. If anything went wrong, or we needed help, oh boy, they were right there!”

Rosemary continued her life of action after the war, working for the Red Cross and helping Hungarian refugees cross by train to Austria and Germany. He daughter Rosamund, 57, described her as “an inspiration.”

She said: “She lived all over the place, in Dusseldorf, Vienna, Belgrade and Paris. She spoke so many languages and drove herself across the continent – in fact she only gave up driving two months ago!

“I’m constantly amazed by her memories, which even of the Blitz are always positive. The way she talks about ‘doodlebuds doodling’ – it sounds so warm, but it was a bloody great bomb!

“But that’s just how she was. Even today she has a very naughty sense of humour. She is constantly saying ‘I’m a nurse, I’ve seen much worse!’ She’s very naughty.”

While both hospitals were heavily bombed from September 8 1940 onwards, thanks to the ingenuity and dedication of staff, no patients were killed during the war. Ten hospital staff and two firefighters, however, did fall victim to the Luftwaffe’s raids.

At a special memorial service held last week, Sir Hugh Taylor, Chairman of Guy’s and St Thomas’ NHS Foundation Trust, said: “The Blitz was a significant period in the history of Guy’s and St Thomas’, and the history of London. Staff at the hospitals did their best for their patients in terrible conditions, sometimes even sterilising their equipment on Primus stoves so that they could work in the converted basement wards when the hot water wasn’t running.

“The first bombs hit the hospitals on 8 and 9 September 1940. Now, 75 years on, we remember the doctors, nurses and physiotherapists who died at St Thomas’ during the Blitz.”

The lives of those lost will always be remembered but, thanks to people like Rosemary, so too will the enduring humour, spirit and comradery of London’s Blitz spirit.

Southwark NewsHistoryHow our hospitals carried on saving lives, despite being bombed during The Blitz