The Solarium in Grange Road, Bermondsey, has been nominated for a Southwark Blue Plaque this year 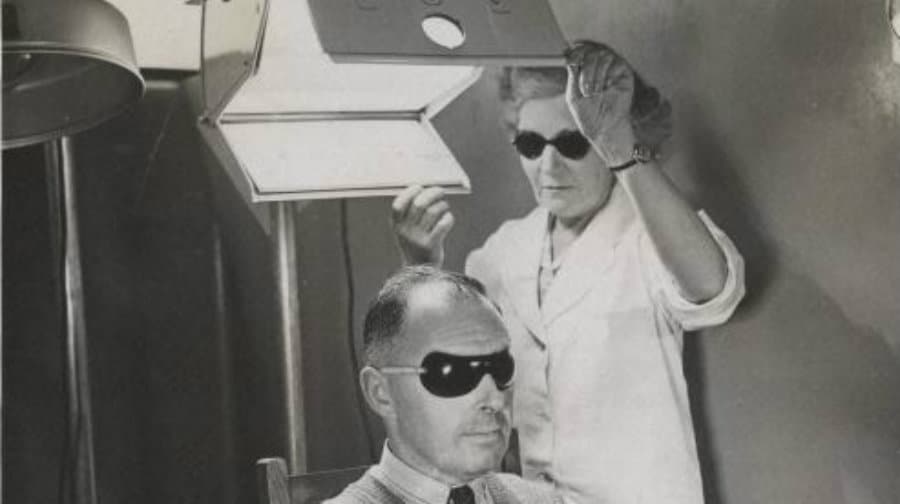 A patient at the Solarium is treated with artificial sunlight. Pic: Southwark Local History Library

We’d all like a bit more sunshine in our lives, but during the inter-war years in Bermondsey, a doctor was so dazzled by the medicinal power of natural sunlight that he set about constructing the nation’s first purpose built solarium from discarded street lamps.

In 1924 Dr R King Brown attended a lecture at Guy’s Hospital by the eminent Dr Auguste Rollier of Switzerland who spoke of the transformative healing powers of sunshine in curing all manner of diseases where he was based in the Alps.

“It literally made me see the light for the first time,” said Dr King Brown in a BBC interview in 1930.

The aghast audience were shown photographs of children and adults with “crippled limbs and bent backs, thin, miserable looking objects” who were restored to a picture of health, showing a difference which was “almost miraculous,” according to the good doctor.

“As a medical man I am not supposed to deal in miracles, “said Dr King Brown, “but I thought then, as I do still, that these cures by sunlight could hardly be described by any other word.”

Tuberculosis was rife in Bermondsey and without a cure at that time, fatalities were high. But overcrowding, poor living conditions and sanitation also led to a proliferation of illnesses like rickets, bronchitis, and alopecia.

After visiting Switzerland to see Dr Rollier’s work in action, King Brown arranged for a handful of sun-starved Bermondsey children and adults to be sent to Leysin in Switzerland to catch some rays.

The “excellent results” spurred King Brown on further but the problem was bringing the blazing Alpine sunshine to Bermondsey. “You have all heard that sunlight is the best doctor, but the trouble is to get an appointment with him,” quipped King Brown, who was not put off by the small obstacle of a lack of natural sunlight.

He approached the Electric Light Department at the Town Hall and got them to rig up five old discarded street lamps in a big room at the Tuberculosis Dispensary, then operating out of 108 Grange Road.

For a year King Brown tinkered with the lamps and all kinds of cases to try to replicate natural sunlight.

“We were satisfied we could reproduce artificially in Bermondsey the curative effects of the natural sun in the Alps,” said King Brown.

When he reported the results of his year of light experiments to the council, he found them to be as excited as he was and they gave him a free hand to create the country’s first purpose built solarium in 1926. The council bought a house in Grange Road and installed a complete set of rooms for artificial sunlight treatment.

Hanovia Ltd, responsible for constructing the new centre described it as “probably the largest of its kind in the world” with the capacity to bathe 1,600 people a day in artificial sun rays.

Many of the borough’s older residents will remember playing in the ‘floodlight rooms’ with their gold-bronze finishes, primrose walls and green rubber floors painted with broad white stripes to keep everyone at the right distance from the powerful lamps.

“In the children’s section nothing could be lovelier than the floodlit room in which the naked children play with toys under the streams of light,” read an article in the John Bull Sunday newspaper in 1949. “They are being saved from deformity, disease and death even while they play.”

By 1935, annual attendance had reached 30,000. The centre employed three nurses, with more than 30 lamps in daily use.

In 1936 an extensive new public health centre was built in Grange Road – thanks to the efforts of Dr Alfred Salter and his revolutionary work raising awareness of health issues in Bermondsey. A whole floor was dedicated to the solarium in the new centre, which is where the ‘Solarium Court’ buildings are now.

The solarium has been nominated for a Southwark Blue Plaque this year. To give it your vote you can email news@www.newsatden.co.uk,  write to Southwark Blue Plaques, C/O Southwark Heritage Association, 216 Upland Road, East Dulwich, SE22 0DH, fill in a voting card at any Southwark library or vote online at www.surveymonkey.com/r/ZFYHYZ6

Film footage of the Solarium can be viewed in this clip:

A screenshot taken from a video shot at the Solarium

Dr. R (Richard) King Brown was my great grandfather. His son was Dr. William Wallace King-Brown (he hyphenated the name in the 1920’s) who had a medical practice in Peckham from 1920 to the early ’60’s. His son, another Richard, graduated from medical school in 1942. He served in the RAMC during WWII but immigrated to Canada in 1952, dying just last year at age 99. I did not follow in the medical footsteps of previous generations and was a teacher instead.

Very interesting to read the article. I had heard various stories about Dr. King Brown and knew he had been the Medical Officer of Health in Bermondsey for many years. My father had told me of the solarium and some of the other work his grandfather had done.