It wasn’t all fun at the frost fairs

As the ice thawed, houses were destroyed and people lost their lives in tragic accidents 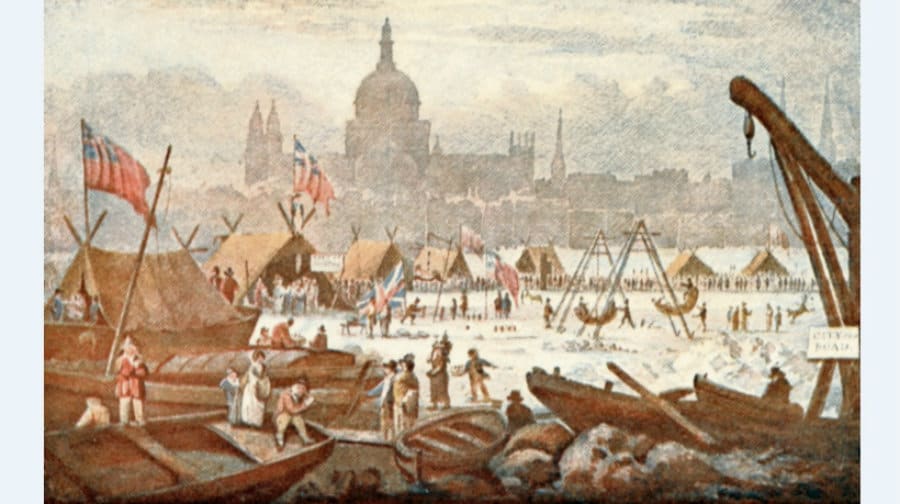 Last week an architectural firm released plans to create retractable frozen jetties on the Thames, in a throwback to the frost fares which were held on the river for hundreds of years.

Between 1607 and 1814 there were a total of seven major fairs when the river froze around the pillars of London Bridge. A host of spectacles would appear on the ice from food stalls to bear-baiting, sledding, stilt-walking, music, dancing, theatre performances, ale houses and mini skating rinks.

For the watermen, who transported people along the Thames, and the lightermen, who moved goods, the frozen waters meant they lost their ability to earn. To make ends meet, they followed the tradition of their forebears and organised the fairs and charged traders and punters for access to the ice.

A good time was had by all, including royalty as King Charles reportedly enjoyed a spit-roasted ox on ice back in 1683. At the final frost fair in 1814 before the winters became too mild, thousands of spectators were treated to a parading elephant on the ice.

We celebrate the frost fares as a charming tradition which was fun for all the family, but it spelled bitter tragedy for some.

In 1739 a whole swathe of ice gave way and swallowed up tents and businesses, as well as people.

Tragedy struck again fifty years later in 1789 when melting ice dragged away a ship which was anchored to a riverside pub in Rotherhithe.

As the ‘Gentleman’s Magazine’ wrote at the time: “The captain of a vessel lying off Rotherhithe, the better to secure the ship’s cables, made an agreement with a publican for fastening a cable to his premises. In consequence, a small anchor was carried on shore, and deposited in the cellar, while another cable was fastened round a beam in another part of the house. In the night the ship veered about, and the cables holding fast, carried away the beam, and levelled the house with the ground, by which accident five persons asleep in their beds were killed.”

In January 15 the shaky end of the fair that year as the ice thawed was reported in the London Chronicle: “…it was not until after the dusk of the evening that the busy crowd was persuaded of the approach of a thaw. This, however, with the crackling of some ice about eight o’clock, made the whole a scene of the most perfect confusion – as men, beasts, booths, turnabouts and puppet-shows, were all in motion, and pouring towards the shore on each side.

“The confluence here was so sudden and impetuous, that the watermen who had formed the toll-bars over the sides of the river, where they had broken the ice for that purpose, not being able to maintain their standard from the crowd, &c, pulled up the boards, by which a number of persons who could not leap, or were borne down by the press, were soused up to the middle.”

On the day this paper went to press, it was later reported that swathes of ice cut through the cables of two ships docked at the old Rose Chair, which were then driven through the great arch of London bridge “…when their masts becoming entangled with the balustrades, both were broken and many persons hurt.”

Despite the tragedies along the way, the frost fairs would continue for another 25 years after this point and only came to an end with milder winters and the replacing of London Bridge.

Southwark NewsHistoryIt wasn’t all fun at the frost fairs