The Kaiser’s silent raid on Camberwell

On October 19, 1917, a 47-stone bomb hurtled from the night sky towards a corner of Camberwell, killing ten people and causing devastation 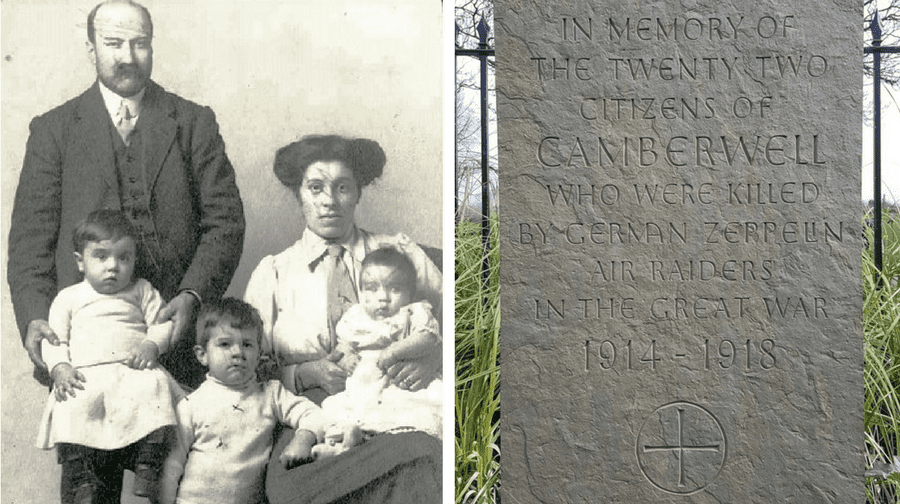 The Boyce family, who lived across the road from a doctor's surgery in Camberwell destroyed by a Zeppelin bomb. Children Eddie (left) and Sonny (middle) lost their lives during the 'silent raid' in October 1917.

On October 19, 1917, a 47-stone bomb hurtled from the night sky towards a corner of Camberwell, demolishing several family homes and businesses and killing ten people.

Earlier that fateful night, six German airships, known as the Kaiser’s infamous Zeppelin raiders, were blown wildly off course from their industrial Sheffield target – with one swept south over Piccadilly Circus, towards Camberwell.

A bomb was offloaded on the corner of Calmington Road and Albany Road – near where Burgess Park is today – demolishing several four-storey houses, including a doctor’s surgery and a fish shop, and severely damaging many homes.

Ten innocent people were killed, 24 injured, and the lives of many others changed forever in what was later dubbed the ‘Silent Raid’.

Speaking to the News, Friends of Burgess Park member Jon Pickup described the story of the Boyce-Balls family who were caught up in the terror of that night.

“Among the victims, Henry Boyce-Balls and his second wife Nellie Darville lived over their grocers shop, across the road,” he said.

“They‘d crossed to the surgery to comfort the doctor’s nervous wife – for an air raid warning had been sounded much earlier that evening.

“Their five young kids lay in a row, sheltering in the cellar.

“Reginald – known as Sonny – aged five, and Edwin – known as Eddie – aged three both lost their lives that night.

“Leslie, aged just four, crawled back into the cellar, unwilling to leave his trapped dad’s side.

“Baby Greta, just eleven months old, was pulled from the rubble, as police rushed to try and rescue victims from the devastation.

“Miraculously Henry and Leslie escaped, and Greta survives to this day, now a spritely 100 years old.”

Greta went on to serve and bugle with the Women’s Auxiliary Air Force (WAAF) in WWII and to witness first-hand the liberation of Europe.

This October marks the 100th anniversary of that night and to commemorate the occasion, and remember the lives of those affected, the Friends of Burgess Park have put together the Zeppelin 2017 project, funded by the Heritage Lottery Fund.

There will be something taking place throughout the month, including a festival of events at Theatre Delicatessen, in the Old Library, Wells Way, which will showcase the work created by residents.

John Whelan will also bring together the historical research with volunteers to tell the story of the raid through an animated walk, and historian and author Stephen Bourne will talk about the armed services as well as men and women who stayed at home and played a role in the civil defence.

“We’re looking to build a really rich picture not just of the Zeppelin raid itself, but of peoples’ lives back then,” said Mr Pickup.

For more information regarding the series of events, visit: http://www.friendsofburgesspark.org.uk/tag/calmington-road/

With thanks to John Whelan, Jon Pickup and Andrew Pearson.