"Perhaps the most successful Africans in Tudor England was John Blanke, a court trumpeter for Henry VIII who performed at Henry VIII’s coronation" 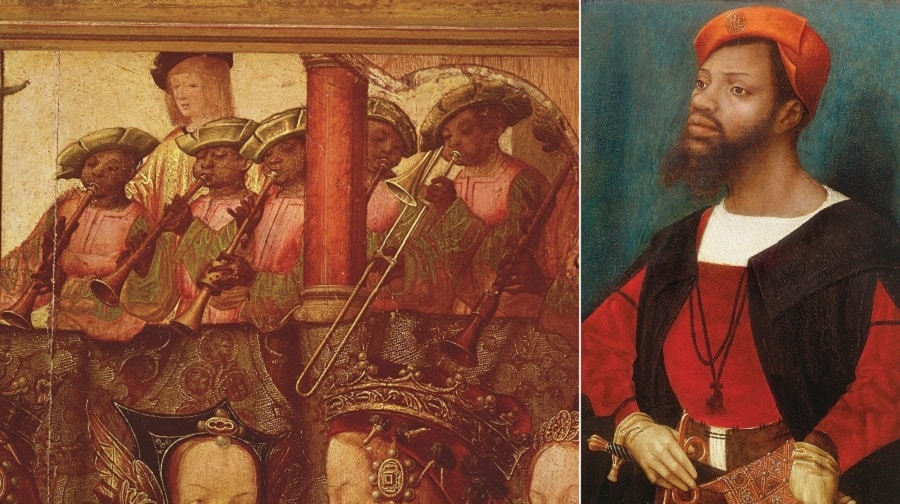 ‘Black Tudors’ by historian Dr Kaufmann, a senior research fellow at the University of London’s Institute of Commonwealth Studies, was published on October, 5 to coincide with the annual Black History Month, writes Katherine Johnston…

The book (pictured below) pieces together the stories of ten real-life characters, and paints a vivid picture of what life was like for the migrants who lived as free men and women before Britain became involved in the slave trade.

Dr Kaufmann argues: “They lived in a world where skin colour was less important than religion, class or talent.”

Some Africans were known by unusual monikers referencing their skin colour, but despite being seen as oddities by their peers, many were accepted in society and achieved great success.

One of the ten real-life figures she researched is a “Mr Reasonable Blackman”, who lived near London Bridge from 1579-1592 and worked as a silk weaver.

Reasonable first appeared in records at St Saviour’s parish in 1579, a church on the site of what is now Southwark Cathedral. He lived near Tooley Street for almost two decades.

Dr Kaufmann says that missing records mean that she cannot be certain, but it likely that Reasonable found his way to London from the Netherlands.

The lowland country was a European cloth manufacturing hub during the sixteenth century and was known for its sizeable African population. At the time, the silk industry was new to England, and very fashionable.

Reasonable went on to marry and have a family of at least three children, but tragedy struck when a 1592 outbreak of plague killed both his daughter Jane, and son, Edmund.

His children were buried at St Olave’s Church on Tooley Street, but Reasonable’s fate is unknown.

St Olaf’s Church had several incarnations from the Saxon period onwards before finally being demolished in 1926.

The site is now St Olaf’s House, part of London Bridge Hospital, but the name lives on in the local St Olave’s and St Saviour’s Schools.

Dr Kaufmann explains that is was likely that Reasonable set up shop in Southwark as in the sixteenth century the area did not fall under the jurisdiction of the City of London.

Workers in the City were subject to strict regulations, and were required to join guilds to trade.

In contrast, says Dr Kaufmann: “Southwark was notoriously dissolute. It was a mixed bag. Some areas were very affluent like today, and others were definitely not.

“Southwark did not have the best reputation in the sixteenth century. There were lots of ale houses, prostitutes, theatres and bear-baiting gardens.”

Perhaps the most successful Africans in Tudor England was John Blanke, a court trumpeter for Henry VIII who performed at Henry VIII’s coronation and is the only black tudor to appear in a painted portrait.

Blanke successfully negotiated a pay rise for his musical talents by writing to Henry VIII that his wage was ‘not sufficient to mayntaigne and kepe hym to doo your grace lyke service as other your trompeters doo.’

Blanke married in 1512 and received a gown, bonnet and hat as a gift from the royal household, but disappeared from records afterwards.

Dr Kaufmann hopes her research will one day be used in schools: “It would be great if the black Tudors were taught in schools on the curriculum. It shatters the Windrush myth that there were no black people living here before 1958.

Black Tudors, by Dr Miranda Kaufmann, is available in bookshops and via Amazon.