Looking back at the slums of Southwark 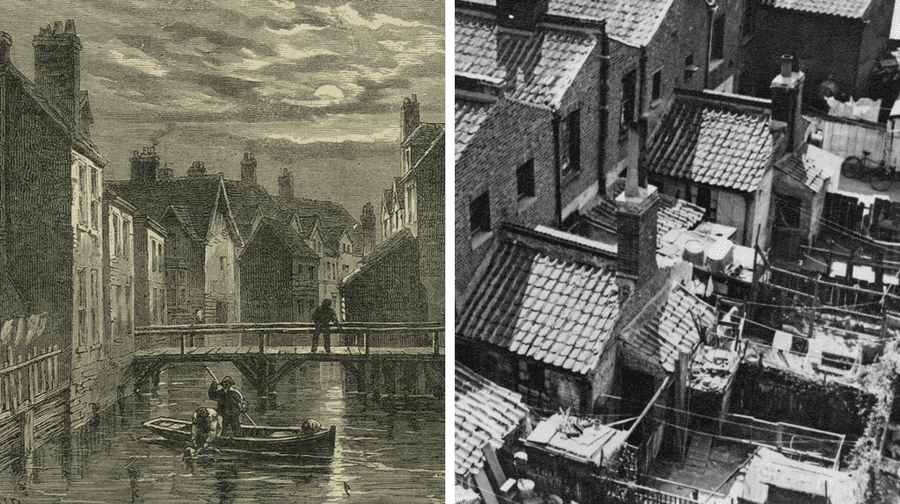 The state of public health and living conditions in Southwark throughout the 19th century and first half of the 20th century left much to be desired.

Many areas of the modern borough – including Bermondsey, Rotherhithe, Walworth, Camberwell, and Peckham – had housing that was overcrowded and in poor condition.

Entire families lived in one room in some cases, living, eating, and sleeping in the same space, and multiple families would share the same outside toilet.

Jacob’s Island – a notorious slum area containing many mills, warehouses, and wharves – was surrounded by filthy water used for almost everything by the people who lived and worked there.

Many areas of Southwark were also close to the river in the Thames floodplain, meaning they were regularly flooded – twice a day in Bermondsey – until the Thames Barrier was created in the early 1980s.

The result of overcrowding was “rows of badly-ventilated, poorly-lit back-to-back houses of dead-end courts that left little space for children to play, adults to get air, or even to dry laundry”, according to local historian Patricia Dark.

“Over the Victorian era, housing became more and more overcrowded,” she explained. “People went to live where the jobs were.

It is no surprise, then, that many died from disease during the period.

A lot of Southwark’s housing stock at this time was privately owned and rented, and about three-quarters of the population lived in privately-rented housing at the outbreak of the First World War in 1914.

“Just like today, rogue and absentee landlords were a problem,” said Patricia.

“While the issues with the Chancery law system that Charles Dickens satirised in Bleak House were mostly reformed by the turn of the 20th century, the intricacies of land and inheritance law meant that, in some cases, a landlord might not even know they owned a property.

“Lack of building supplies, lack of skilled tradesmen to make repairs, and lack of income on landlords’ parts meant that even those landlords who wanted to keep their properties in good repair had difficulty doing so. Houses were even colder, draftier, and damper.”

A housing crash in the 20th century meant housing was in short supply and in a bid to raise money, landlords and tenants divided and sub-divided what were intended to be single-family homes into flats and then single rooms.

“Subdivision of single-family houses meant the kitchen became another all-purpose living space for a family, while other living spaces lacked plumbing of any kind.

“In some flats in Bermondsey, five families – up to 30 people – shared a single outdoor toilet, accessible only through the kitchen on the ground floor.

“In all these cases, keeping house, clothes, and self clean was a vicious uphill battle – which meant the families dwelling there were constantly exposed to a variety of germs and vermin.”

Families at the time had to eat as cheaply as possible, which usually resulted in a poor and unbalanced diet.

“Although dockers were highly skilled, they were usually hired for short periods – a single ship, a week, or even by the day,” Patricia explained.

“Wages weren’t high and, more importantly, they were unreliable, making it very difficult to budget or plan spending.

“These conditions meant that the health of individuals and communities was on a knife-edge: any sort of hard times – a father out of work for a single family, the dockers’ and general strikes for a community – could and did create serious illness and suffering.”

I was wondering whether or not you had anything on Gravel Lane Southwark. My great great grandparents lived at No.24 according to the 1841 census, before leaving for South Australia. Their names were Richard and Ann Langford, nee West. He was a chair maker. Both died in SA and were buried as paupers.

Thank you for the interesting articles.

Southwark NewsHistoryLooking back at the slums of Southwark