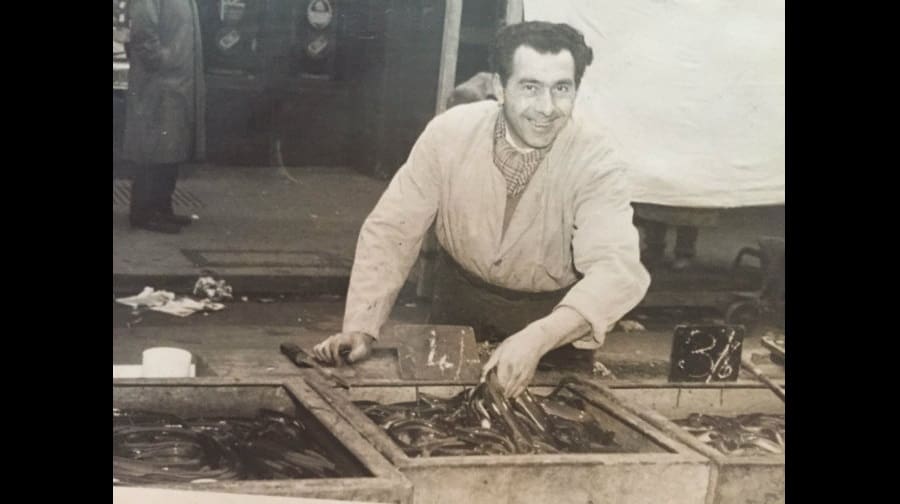 Pie and Mash has long been a competitive business in working class London, right back to Victorian times when eels were netted from the Thames and pastry was rolled by wives on their doorsteps.

Now, new photos have emerged that date back to the birth of Manzes – one of the biggest names in the old delicacy’s trade.

The News spoke to Geoff Poole, one of three Manze brothers who has kept alive the generations-old tradition of feeding London’s working classes a sturdy meal.

According to Geoff, the first Manze’s pie and mash in the area was formerly a Cooke’s Pie & Mash in Tower Bridge in 1891, owned by his great grandfather-in-law, Robert Cooke.

The original ‘Manze’ brand belonged to Geoff’s grandfather Michele Mansi, who immigrated to London from Italy.

Geoff revealed that the famous Manze name is in fact the incorrect spelling of his original family name.

“We think the correct spelling is Mansi,” he said. “But around the country there’s different spellings.

“It’s because a lot of people just didn’t know how to spell it. When they came over from Italy in their boats, the people taking their records would have just written it how they thought it sounded.”

Michele came from Rovello, just by the Amalfi Coast, “an absolutely beautiful part of the world,” said the 58-year-old.

“He started off running a little stall in Tower Bridge Road next to Cooke’s that said ‘confectionary’ on it, so we assume from the photos that he sold ice creams.”

“He actually started off just selling ice, because in those days it was needed by everyone in every company and there were no freezers. I think there’s still some Manze businesses selling ice cream around the country.”

The three brothers believe their grandfather would have after arriving in London, and probably been labourers, despite crossing the Mediterranean to escape the poverty in Italy’s rural south.

But the turning point in Michele’s life came when he “hitched up” with Robert Cooke’s daughter. The business inherited his name in 1902 after he took it over from his father-in-law.

At one stage the Manze’s empire included fourteen shops across south east London. A fourth Southwark shop once occupied The Blue in 250 Southwark Park Road, which closed before the family opened up the Peckham High Street shop in 1927. Over in Lambeth there was a Manze’s in Coldharbour Lane, close to Windrush Square.

“There was a relative working in each shop,” Geoff said. “It gave you a living and a home, that’s how it worked.”

Today Geoff and his brothers Graham, 64, and Rick, 53, all live in Croydon, but each look after three shops in Peckham, Tower Bridge Road, and Sutton. Meanwhile there are other Manze’s shops in Hoxton and London Fields run by members of their extended family.

“We’ve spent many, many years researching it but it’s a long and complicated story. We have mainly looked at the addresses of the former shops and checked the census records to see why used to live and work in them.

“All I wanted to do was work out how we were all related, and it all goes back to Cooke’s Pie and Mash.”

So why did pie and mash become such a staple of the cockney diet?

Geoff’s explanation: “It was very cheap and quite nutritious for its time that didn’t cost an arm and a leg. You were getting meat and potatoes. It was a filling meal and it suited them.

“We have always prided ourselves on being affordable but a good meal, with the same old flavours and we use the same recipe that we always have done.

“We make our own pastry and the meat is bought fresh from Smithfield Market. The eels are still in short supply because they have been an endangered species for a long time, but we import them from Holland and from Loch Neagh [in Northern Ireland].

“I have seen some old film from 1910 that shows you the old shop, but outside it’s wall to wall with people. Everyone was on the street because there was no room for people in doors.

“The business is getting harder. We rely on familiar customers and older generations bringing the younger generations into to have a taste. But the poorer people are moving out which doesn’t suit us.”