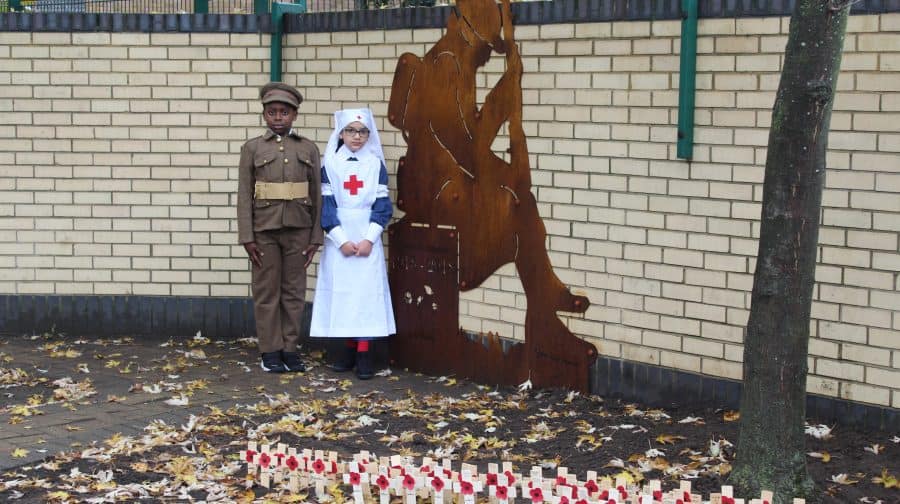 Rotherhithe school pupils have unveiled a memorial garden today to commemorate the contrary of the Armistice on Sunday.

Youngsters at Redriff Primary school, on Salter Street, have been taking in a week-long series of activities to mark the all-important anniversary since the end of WW1 including opening the memorial garden.

It features a steel soldier inscribed with the words ‘Redriff Remembers 1918-2018’ as well as crosses placed by the children bearing the names of the 600 soldiers from Rotherhithe who were killed in the war.

Mickey Kelly, executive headteacher of Redriff Primary, said: “This week has been a moving experience for all the students and staff at the school.

“The children have really grasped the importance of Armistice Day and World War One.

“Teachers have held workshops for the children on what life was like in the trenches and the different aspects of the War, from roles animals played to the impact of the War on women’s lives.”

Prior to opening the memorial garden, staff and pupils also had a remembrance assembly, and held a two minutes silence to reflect on the sacrifice of local soldiers.

The children, ranging from nursery age to year 6, have also constructed a poppy made from stones on which they have written the names of each solider.

The poppy will remain as a permanent feature in the school’s playground.

Alongside the poppy is a silhouette, which has been supplied by the charity Remembered as part of its 2018 Armistice project, There But Not There.

Sunday marks the centenary of the Armistice which marked the formal end of fighting in World War One.

Memorial services are scheduled to take place all over the country including in Southwark.