Memories: Telling a Lighterman’s journey in Bermondsey and Rotherhithe

“My first tug was the Plaudit in 1951 when I was 15 and the boat was brand new. I loved it,” Tommy Cottrell says with a glint of nostalgia in his eye. 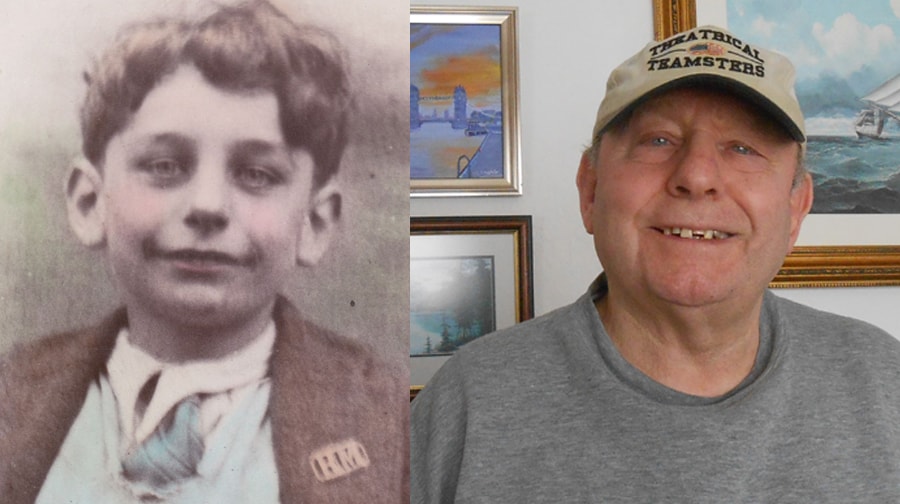 Tommy as a boy and now

The Cottrells were first recorded in Bermondsey and Rotherhithe in the 18th century and many of them are still here.

Tommy Cottrell came into the world at Guy’s Hospital in 1935, followed by brother Harry in 1937.  The family home then was in Park Buildings, where Tommy’s dad Fred was a stevedore in Surrey Docks and his mum Nell a park keeper.

Tommy’s dad was originally an act on the music hall circuit after winning a competition to ride a ‘mad mule’ for 20 seconds at Camberwell Palace. “As he got off the mule,” begins Tommy “it bit him, so me dad bit him back!” A showbiz career beckoned and for a while Fred Cottrell was a minor star but when he met Nell Roden, who came from a long line of leather workers, she wasn’t going to have him gallivanting all over the country, so he found work in the docks.

For young Tom, growing up in Rotherhithe was always fun. “We played Tin Can Copper, and any wall would have a goal and a wicket painted on it where you could play football or cricket… Knock Down Ginger was a favourite and we’d make our own scooters and Go-Karts from wheels, bits of wood and bottle tops laying about.” By the time war came the family had moved to 13 Tissington Street and Tom went to the school at the end of his turning, Rotherhithe New Road School. “I remember in 1944 we were playing in our street and a Messerschmidt flew over and I could see the pilot looking down, and Georgie Wicks started throwing stones at it!” Tommy laughs at the memory before telling a tale of Charlie “Wee Willie Harris, the legendary rock ’n’ roller, running indoors to escape the bombs and careening straight into the bannisters.” Because of the dangers of inner city life at that time, Tom was evacuated to Norfolk and Mansfield, which meant he survived the war to go on to Credon Road School, which he also survived. He recalls vividly Mr Mitchell, the Head Teacher, asking him what he wanted to do when he left. Tom replied honestly “I’d like to be a journalist.” What came next seems to be a common thread amongst working class school leavers. “I’ll never forget it,” Tommy began, “he said to me “who do you think you are?” I used to write some really good essays but there was no encouragement whatsoever, and that’s always stayed with me.”  Tom followed in the footsteps of his father.

The river has always been a big part of Cottrell life. “All me cousins and uncles were in the dock, Harry was a docker, me dad was a stevedore and I was a lighterman. My first tug was the Plaudit in 1951 when I was 15 and the boat was brand new. I loved it,” he says with a glint of nostalgia in his eye. “It was something different every day and I was working with lovely people.”

Like many local boys Tom supported Millwall. “The first fight I ever saw there was when my dad knocked a bloke out in 1947!”  The man had knocked young Tommy over while verbally abusing the players and Fred Cottrell took umbrage. This early initiation into the Den did not put Tom off and he still goes to the games. In fact, for many years, along with his brother and friends, he was a train steward for the away games.

A highlight in the young Cottrell’s life was when, at 15, he had a trial for Millwall. He takes up the tale. “After 20 minutes I was called off but I told ‘em I wasn’t finished yet. “We have,” they said!” Tom laughs now at the memory. “What a cheek, eh? So I nicked a shirt and a football.” Tom’s working life on water was interrupted by National Service in the Royal Marines, two years that took him all over the Mediterranean and North Africa, and on his return he went back to work as a lighterman. In his hometown once again, Tommy frequented all the local pubs along where the family was then living in Jamaica Road, and it was in the Concorde where he met his future wife June; they went on to have three sons. “We all wore suits on Saturday nights,” he says. “They’d cost about 15 quid, and a ‘Slim Jim’ tie was half-a-crown.” Tommy’s mum, Nell Cottrell, worked as a park keeper in St James’s Park for many years, in charge of the famous slide that brought joy to generations of children. But sometimes all those kids got a bit much for Nell. “My mum’s hut was right under the slide and all day in the summer holidays she’d hear the footsteps pounding up the stairs and then the whooshing of the coconut mats as they came down – the incessant noise used to drive her up the wall,” says Tom. “So she used to throw a bucket of water over the wooden slide, which would stop the mats sliding. ‘Sorry, it’s closed today,’ she’d say to the kids, ‘It’s too wet!'” More hilarious stories about Nell, Aunt May and Aunt Flo followed, but there are too many to include here. When the London Docks went into decline, Tommy’s work faded out with it. He bought a couple of trucks and tried his hand at haulage, but it was less than ideal. “I was always working and never saw June and the kids.” A job at the Thames Barrier came up when that was being built, taking him back to the Thames, and when that job ended in the ‘80s the family took over the Windsor Castle pub, in Coopers Road, where they stayed for four years. “The pub game was dying even back then, so I ended up working on the council for a while before returning once more to the river and working on the Woolwich Ferry.”

Our time was coming to an end, so I asked Tommy Cottrell one last question: what’s the best thing about Rotherhithe and  Bermondsey? “Out of all of London,” he said, “the people there have the best sense of humour. The funniest people I know all come from there.”

Southwark NewsHistoryMemories: Telling a Lighterman’s journey in Bermondsey and Rotherhithe