Many people in Southwark will have great memories of the Beehive over the last 50 year but this article concentrates on some of the less well-known stories from its long history. 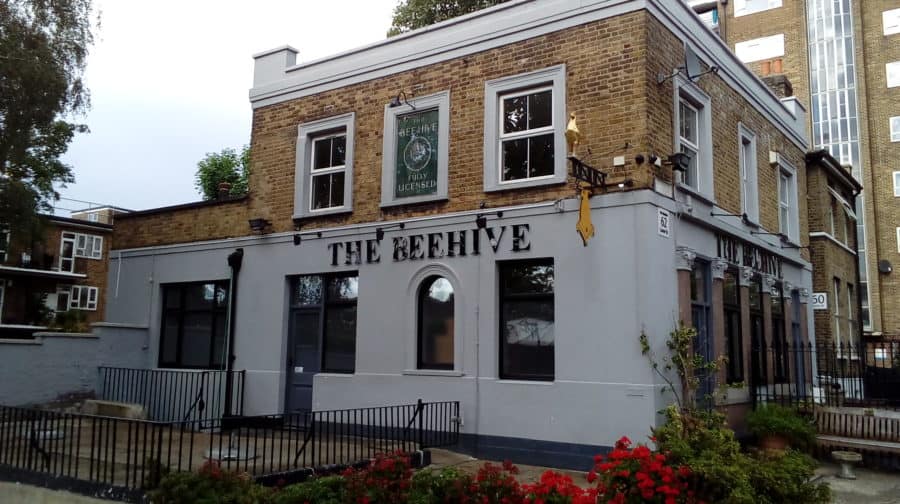 The Beehive in Walworth's Carter Street

The British institution of the local pub is under serious threat. In the last few decades, countless pubs all over the country have closed and many others could follow, writes Neil Crossfield…

The Beehive in Carter Street, Walworth is one of these, with plans put forward by the current landlords to convert the pub into flats. In recent years, pubs are just places we go to for a meal or meet friends for a few drinks, yet in earlier times they played a far more key role in the community they served.

Many people in Southwark will have great memories of the pub over the last 50 years or so but this article concentrates on some of the less well-known stories from its long history.

Henry Montgomery, the father of Viscount Montgomery of El Alamein, was a local priest and historian. In his 1889 book Kennington and its Neighbourhood, he notes the presence of a Beehive Tavern in Walworth as early as 1799.

Though the location of the pub may have changed slightly over time, we can safely say that there has been a Beehive in Walworth for over 200 years, and it is believed that the current building is from about 1830. Its appearance and design would have undergone many changes over time yet it appears to have functioned as a public house throughout. 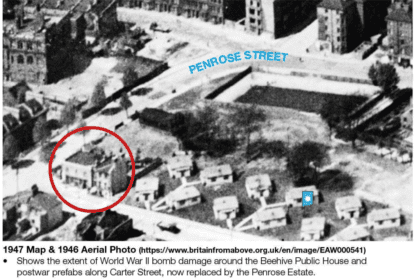 The pub holds a particularly important place in British sporting history, as cricket was played there from the late 1700s. The Montpelier Cricket Club was founded in 1797 and initially played its home matches at the Montpelier Tea Gardens. In 1827, a publican called John Bryant took over the Beehive and had set up his own cricket ground next to the pub.

Just a few years later in 1831, the Montpelier Club moved down the road to the Beehive Ground. They stayed here till 1844 when the land was sold for housing schemes, including that of the nearby Sutherland Square.

Cricket was not the only sport at the Beehive. Archery competitions were being held as early as 1839 and pigeon shooting matches were also common. The accuracy of those participating was not always great: in 1834, a journeyman shoemaker called John Phillips was shot in the arm, side and face whilst walking past the Beehive when a shooting match was going on.

In the mid-nineteenth century, the now largely forgotten sport of pedestrianism became hugely popular. Initially beginning with members of the aristocracy betting on races between their footmen, pedestrianism developed into a major sport. There are many reports of these races taking place at the Beehive in the 1840s and they often attracted crowds of 3,000 or more.

Walworth fights to save a beloved pub from redevelopment

Running races were also held there. One Saturday in April 1845, a renowned runner named George Sherrin took part in a 440-yard hurdles race – against a horse. Though Sherrin had started well, the horse – Bob – soon took the lead but then refused to jump one of the hurdles, allowing the human to win.

This must have been a year of eccentric challenges, as on September 15 a young boy of 16 named Molloy took part in ‘the Egg Match’. One hundred eggs had been placed one yard apart and the lad had to pick up each egg in his mouth and transfer it into a tub of water at the end of the course. Despite poor weather, he managed to do this in 48 minutes, covering 5 and ¾ miles in doing so and winning himself £10.

Prior to the establishment of public mortuaries and coroners’ courts in the late 19th century, many inquests were held in local pubs. It is believed that this was because they were large enough to accommodate the coroner and jury but also would usually have a table large enough to display a body.

The Beehive was no exception and in January 1857, the pub was used in the inquest of a terrible double murder where two young children, Edwin Fuller Bacon aged 3 and his infant sister, Sarah Ann, had been murdered by their mother who had recently been released from St Luke’s Asylum. Inquests were being held here at least until 1881 when it hosted an inquiry into a fatal fire at 96 Walworth Road in which four people had died.

When a building has been around for so long it is bound to see some sadness and tragedy. On August 14 1901, the publican Ernest James Suckling lost his daughter, Ethel, only 31 hours old, in a terrible accident. Doctors had ordered this nurse, Catherine Hoyle, to swaddle the child in cotton wool to keep it warm. Unfortunately, while warming a piece of this cotton wool in front of the fire with the baby on her lap, it ignited the material around the infant. Despite his best efforts to extinguish the flames, the baby died shortly afterwards of severe burns and shock.

However, not all the history of the pub is so bleak. It was the meeting place for many clubs and organisations which flourished in Victorian London. In March 1878, a meeting of the Excelsior Lodge of the Royal Antediluvian Order of Buffaloes took place. The ‘Buffs’, as they were known to members, were a fraternal organisation started in London in 1822, to provide philanthropic and charitable assistance to its members and the local community.

In February 1885 up to 40 members of the Walworth and Newington Branch of the Hearts of Oak Benefit Society held a dinner at the pub. This was a Friendly Society set up to provide support in times of distress through sickness or injury. Members would contribute a small sum of money each week which went into a central fund to be drawn upon should they need to do so.

On this night the members “sat down to a repast placed on the table with that liberality for which the worthy host, Mr Last is so well famed”. During the evening members of the group sang together, and Sergeant Allen of the 1st Surrey Rifles, an Indian Mutiny hero, also performed some “capital and warlike songs.”

Pubs were often used to host various sales of goods or provisions but few of these auctions could have been so exotic as the one which took place at the Beehive on 27 January 1842. The Weekly Freemans’s Journal reported that a Mr. Batty, proprietor of a collection of wild beasts, sold various animals from his menagerie.

The variety and number of animals sold that day afternoon was astonishing, and prior to the sale, they were displayed in the grounds of the Beehive. Apart from a ‘remarkably clever’ talking macaw and a pair of ‘Esquimaux’ sledge dogs, Batty sold a trained Barbary lion for 105 guineas, the allegedly largest polar bear in Europe and a trained male elephant for 350 guineas. A puma was sold for £14, a Bengal tigress for £90 and a five-toed sloth for 12 guineas.

Perhaps one of the most bizarre sights ever witnessed by the regulars occurred in September 1837 when a monkey parachuted onto land next door to the pub. This was part of Mrs. Graham’s spectacular balloon show at the nearby Surrey Zoological Gardens. The unfortunate creature was dropped in a small cage from around one hundred feet in a primitive parachute but had been blown off course when it had not opened properly.

The monkey may have been the famous ‘Signor Jacopo’ who was a veteran of over 200 parachute jumps. Astounded drinkers in the Beehive would not only have had the rare sight of a parachuting monkey but the lucky finder would receive a reward of £2 and free admission to the Surrey Zoological Gardens.

One of the darkest days in the history of the Beehive was on 23 June 1944. The citizens of Walworth had suffered greatly during the blitz but after D-day you could perhaps excuse them for thinking that the worst was over. Yet just over the Channel, Hitler was preparing to unleash a terrible new vengeance weapon on London. At 02:28, Carter Street was shaken by a massive explosion. A V1 flying bomb had hit demolishing at least five houses and causing severe blast damage to many other properties in the surrounding streets.

Ten people died in this incident and many more would have been injured. This was the first of six V1 flying bomb attacks on Walworth between June and August 1944. The pub survived with minor damage.

There is still much more to learn about the Beehive’s history and the stories related here are just a snapshot of its past over the last 200 years. It certainly has seen its fair share of joy, sadness, triumph, and tragedy. However, despite the current impact of the pandemic, as we have seen the pub has proved remarkably resilient over the years and has always been able to adapt and reinvent itself to cater for an ever-changing local community.

Its importance to Walworth was recognised by it being designated as an Asset of Community Value first in 2015 and again in 2020. Though its future at present appears uncertain, its history is remarkable and deserves to be protected.

Further details on the campaign to save the Beehive can be found here.