Puritans 'saw Southwark as hell on earth, with its drinking places at the heart of the problem' 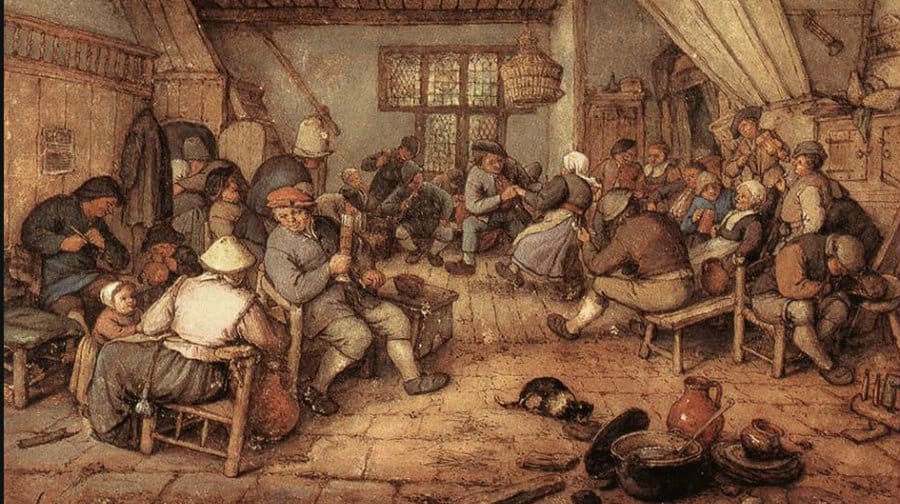 As any self-respecting barman will tell you, Southwark’s pubs are more than just places to sink a pint or play pool. Every bar, from the Mayflower on the banks of the Thames to the Colby Arms at the foot of the borough, is a prism through which Southwark’s social history can be viewed.

From boxing legend Henry Cooper sparring in the Thomas A Becket to Joe Strummer of the Clash rocking the Ivy House, Southwark’s boozers have seen their fair share of famous faces and notable events.

Indeed, even a single pub can be packed with enough history to fill hundreds of pages – just ask Peter Brown, whose excellent book Shakespeare’s Local details the enthralling tales of the George Inn, which over the course of its 600-year history has counted Chaucer, Shakespeare and Charles Dickens – who was rumoured to have written a chapter of A Christmas Carol there – amongst its regulars.

However, during the 16th and 17th centuries, the borough’s watering holes came under threat from the most formidable enemy of the time: the fun-loathing, pleasure-draining, perma-frowning Puritans.

Journalist Henry Mencken described Puritanism as “the haunting fear that someone, somewhere, may be happy.”

Both men were spot on, and during the 1500s and 1600s, Southwark’s pubs were firmly in the sights of the Puritans, who felt that the rough-and-tumble boozers didn’t fit their vision of the purer world they were trying to create.

They descended on the borough, where they had a higher level of support than elsewhere in the city due to the influx of Protestant immigrants fleeing persecution in Europe, and set to work.

In his book, Brown says: “The Puritans saw Southwark as hell on earth, with its drinking places at the heart of the problem.”

They certainly didn’t need to look far to find one, with whole streets sometimes taken up by a string of ale houses, with one for every fourteen households in the borough. One Puritan described Southwark’s pubs, dramatically but eloquently, as “nests of Satan where the owls of impiety lurk and where all evil is hatched, and the bellows of intemperance and incontinence blow up.”

Another said they were “nurseries of all riot, excess and idleness.”

Regardless of the metaphor used – and, whatever their views on fun, Puritans did seem to go for metaphors in a big way – it was clear they had an issue with Southwark’s drinking problem.

After seizing political power following the 1642-1646 Civil War due to support from dour Oliver Cromwell, the Puritans began destroying the borough’s boozy culture from the inside. A new licencing act banned the playing of unlawful games, betting, drinking while church services were taking place (which, in Puritan London, took up quite a bit of time) and buying and selling goods in pubs. Going for a swift pint or ten had suddenly become a lot less fun.

Extreme anti-prostitution laws were also introduced, targeting pubs whose back rooms doubled as brothels – a major money-spinner. Men who were caught visiting a hooker faced three months in jail, while the women themselves would be publically stripped and flogged.

Some even pushed for prostitutes who were caught red-handed to be killed – or at least branded on their face so that everyone would be aware of “the adulterous Children of Satan.”

In the end, though, pints beat purity. After a decade of power, Puritans faded to irrelevance following Charles II’s rise to the throne. The King, known as the ‘Merry Monarch’, ruled with a jolly mentality that clashed with the Puritan spirit, who Brown notes in his book “believed that if you tapped your foot to music, you might as well just got the whole hog, rename yourself Beelzebub and have sexual intercourse with the corpse of a recently sacrificed goat.”

Charles II’s court was perhaps best described as “hedonistic”, with this tone trickling down to the masses, who were greatly relieved after a decade of increasingly sour Puritan rules. Southwark had held out and remained Britain’s capital of debauchery.

The borough, says Brown, “was not only the dumping ground for what London didn’t want, but also for what it did want, but didn’t want to acknowledge wanting” – and that’s surely worth raising a glass to.

With thanks to Pete Brown and his book Shakespeare’s Local.

You mean to say there was a time when the devout felt compelled to impose their prudish piety upon other adults engaging in victim-less consensual behavior?

The puritans still have power and influence here in the US.