Old Operating Theatre: the church with an 18th century surgery hidden in its roof 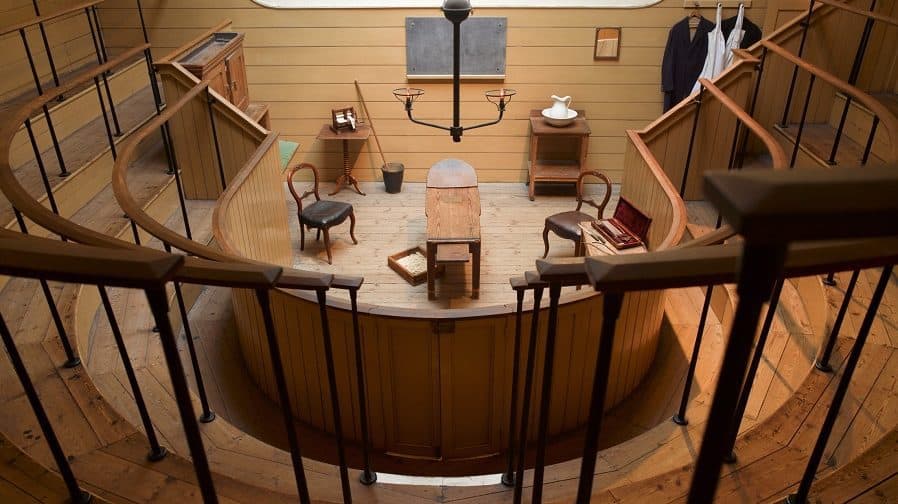 There is something very special on St Thomas’ Street near London Bridge. An 18th century church with a secret hidden inside its roof space – the oldest surviving pre-anaesthetic operating theatre in Europe, writes Kirsty Chilton…

This operating theatre was once a real working hospital space belonging to St Thomas’ Hospital, an institution in Southwark since at least the 12th century.

Named after Thomas a Beckett, whose Canterbury shrine was well known for healing miracles, the hospital remained connected with the church until the dissolution of the monasteries in the reign of Henry VIII, when it was closed down.

St Thomas’s survived, however, reopened by popular demand in the reign of Edward VI as a renewed charitable institution for the poor in the local area.

Under successive boards of new governors, the hospital began to thrive again, raising money for the charity through rent on property on its lands and donations from the wealthy.

The current Church of St Thomas’ itself was built during a period of growth for the hospital at the end of the 17th century, a few decades before Guy’s Hospital was separately built on its current site.

It was both a parish and a hospital church, and the attic – or garret – in the roofspace was created as a herb storage and drying room for the hospital’s apothecaries.

Around a hundred years later, in the early 1820s, half of the apothecary’s space was transformed into an operating theatre, and a skylight added to its roof to allow in all the light the surgeons needed.

It is these two rooms, hidden safely inside the church, which survived the demolition of most of the rest of the hospital.

St Thomas’ treated the victims of accidents, fires, crimes, local riots and wars, as well as victims of diseases like plague, tuberculosis, cholera, and syphilis.

Operations took place with no anaesthesia for the patients and were performed in front of “shoals” of medical students eager to see each technique in a real-life situation.

At a time when hospital-based medical education had become increasingly important in London, operations like the ones at St Thomas’ always had an audience.

The operating theatre was used for operations on women patients – in the 19th century, the woman on the table would have been the only woman in the room.

The audience would have been large, an intimidating and bloody experience for any patient with no anaesthesia to control their pain. However terrifying it sounds however, there was also a lot of innovative practice at the hospital.

Until the middle of the 19th century, St Thomas’ Hospital covered the whole site on one side of St Thomas’ Street, from Joiner Street at the Shard as far as Borough High Street and Tooley Street.

Its presence is almost invisible today because most all of the hospital disappeared in the 1860s to make way for the railway.

However, not all of the hospital was destroyed. An old ward block (now the post office on Borough High Street), and a few houses on St Thomas’ Street, along with St Thomas’ Church itself and the hospital spaces in its roof survived the demolition.

Closed up and concealed for over a hundred years, the spaces were rediscovered in the late 1950s, and the museum opened for the first time in 1962, devoted to telling the story of St Thomas’ Hospital and its patients, surgeons, and students.

Today, visitors can climb the 52 step spiral staircase in the church’s old bell tower to reach the museum, where they can see the herbs and hand-driven machines used to make the medicines, a cabinet of animal curiosities, pathology specimens in jars reflecting the importance of anatomy, and a collection of amazing 18th and 19th century instruments of surgery including obstetric forceps, head drills, amputation saws and knives.

Visitors at the weekends can hear talks about life in the hospitals, and the operations that happened in the hospital see the instruments in person and learn about how they were used by the best surgeons in London.

Southwark NewsHistoryOld Operating Theatre: the church with an 18th century surgery hidden in its roof